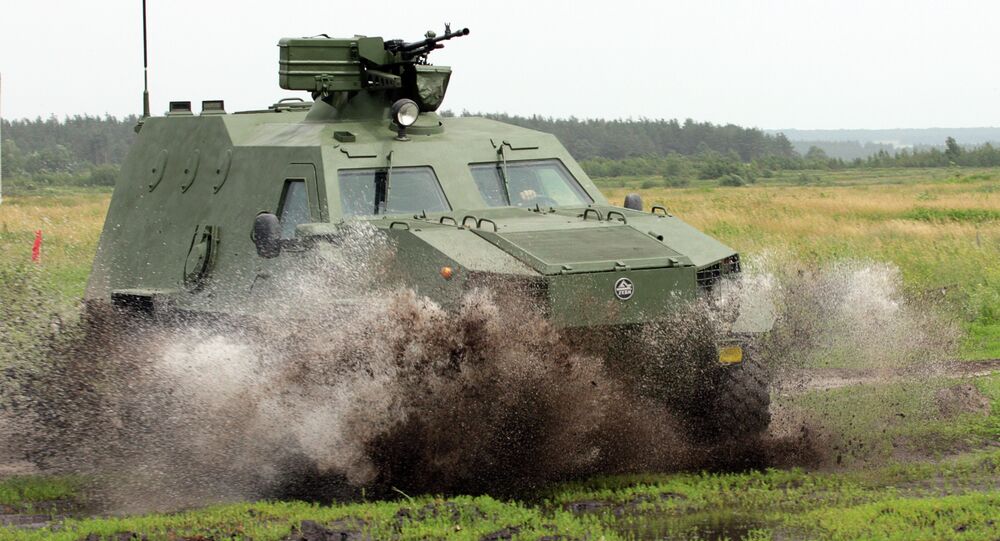 ‘Shame': How Did New Ukrainian Armored Car Get Its Nickname?

The Ukrainian Army was due to receive "Dozor-B" armored cars in March, but only one trial model has been manufactured so far... and it broke down.

© Sputnik / Sergey Averin
Tanks Made in Ukraine Cannot Take a Hit
Despite the promises of high-ranking officials, the Ukrainian Armed Forces are not likely to get the much-touted "Dozor-B" armored cars, Ukrainian ZN.ua said.

On Friday, Ukrainian media reported that the Lviv Armor Plant CEO was dismissed over the inobservance of manufacturing plans, including the production of "Dozors".

Back in June 2014, Oleksandr Turchynov, the commander-in-chief at the time, assured that the army would receive 200 "Dozors" soon. In February 2015, the Ukrainian Defense Industry chief promised that the deliveries would begin in March. Recently he has shifted them to the end of summer.

So far no "Dozor" has entered service in the army.

"The trial model was allegedly completed in early 2015. The workers have dubbed it "shame" ["Shame" is "Pozor" in Russian, which sounds similar to "Dozor" — the car's name]. They told us that border guards drove the "Dozor-B" on the automobile track. The car did not return under its own power," ZN.ua said.

https://www.youtube.com/adkanaris
Saxon vs BRDM vs Hillock: Who Wins the Test Drive?
The Ukrainian Defense Industry names the lack of funding and the problems with the shipment of engines from Germany as the reasons for delay.

The outlet also recalled that on October 3 President Petro Poroshenko fired a 7.62mm machine gun bullet at the car's armor to test it. He convinced journalists that the armor passed the test; however, the shallow penetration suggested that the armor was untampered.