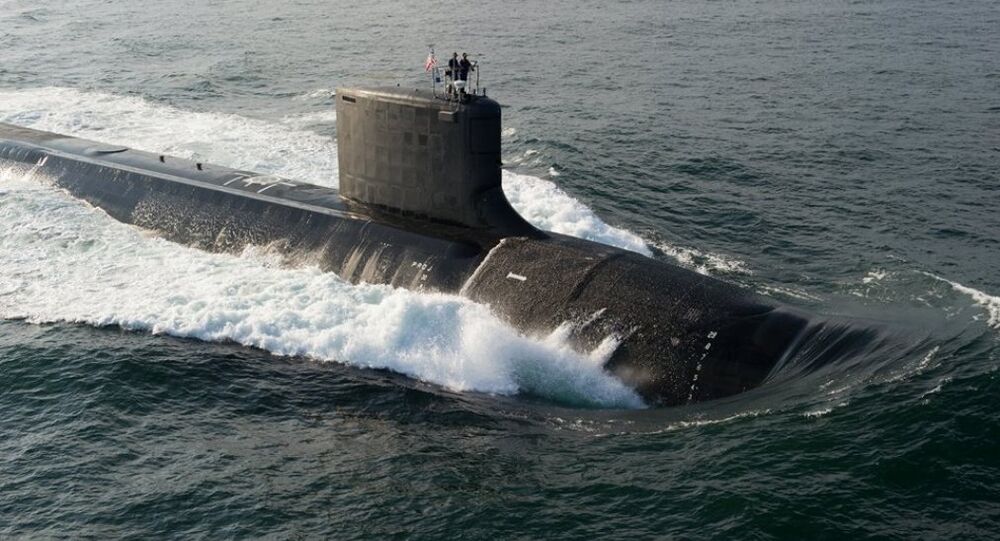 Invisible No More: US Stealth Subs to Lose Unbeatable Advantage

The US Navy's worst nightmare is about to come true: new technologies will deal a severe blow to the ability of American stealth submarines to vanish beneath the waters without a trace, Professor of Strategy at the Naval War College James Holmes stressed.

US atomic stealth submarines have long enjoyed their unbeatable advantage to remain undetected beneath the oceans' waters; however, a new technological revolution is likely to nullify this advantage, undermining America's capacity to execute its ambitious foreign policy in distant waters, Professor of Strategy at the Naval War College James Holmes underscored.

"Unless US forces adapt to and lead the new competition, the era of unrivaled US undersea dominance could draw to a surprisingly abrupt close," Bryan Clark, the Center for Strategic and Budgetary Assessments (CSBA) analyst and retired US Navy commander, stated as quoted by the professor.

© AP Photo / Mindaugas Kulbis
Ghost Planes: NATO Aircraft Conduct Flights With Transponders Off
Almost 60 years ago US stealth submarines had become game-changers in underwater warfare, while the advent of nuclear propulsion allowed this craft to remain beneath the waves for protracted periods of time. No longer could anti-submarine forces rely on radio or radars in order to detect elusive US subs.

However, a new technological leap is about to upset the US Navy's applecart. Big Data, non-acoustic detection, and fire-control technology will allow hostile antisubmarine (ASW) forces to detect the traces of a US stealth sub, converting this information into tracking and targeting data.

"That's a grim prognosis in itself. Abrupt change begets major traumas in big institutions like navies. It's hard to get ahead of the process," Professor Holmes admitted.

© AP Photo / Ritchie B. Tongo
Pentagon Presses China to Halt South China Sea Projects, Beijing Stands Firm
However, the situation for US subs is not entirely desperate, the expert noted. Mr. Holmes suggested that submarines should now study both passive and active defense paradigms. They might act like naval aviation, namely the latest air-force F-22 and F-35 fighter jets, which rely more on "active countermeasures" such as electronic warfare than on stealth. "Naval airmen defeat or fool defenses rather than elude them," the professor elaborated.

On the other hand, fleets of unmanned undersea vehicles (UUVs) may extend the submarine's ability to counter ASW, while new torpedoes and Tomahawk anti-ship missiles "would help redress the imbalance between subs and access deniers."

Anyway, US stealth subs will no longer be able to disappear from their adversaries' view with impunity, the professor underscored, adding that it is more likely that the underwater theatre will resemble much of the aerial and surface theaters.

"In short, submariners will no longer be as exceptional as before… And subs will no longer be loners, sent forth to do great things in independent operations. In short, not just a technological but a cultural revolution is afoot. Embrace it," Professor Holmes concluded.