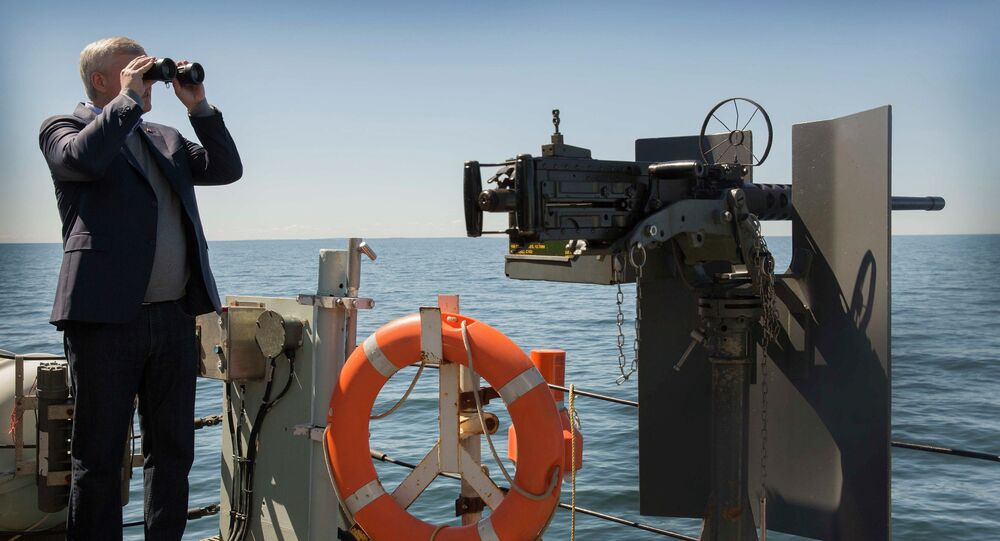 "The Russian ships have been acting very professionally in terms of keeping a respectful distance and not acting in a threatening way," Stephen Harper said.

"Observing Russian navy vessels while on board the frigate Fredericton in the Baltic Sea," Harper wrote on his Twitter page.

He also posted two pictures. In the first picture he stands by a machine gun and a lifebuoy and observes the sea through binoculars. The other photo shows a view through binoculars of a warship on the horizon.

Observing Russian navy vessels while on board @HMCSFredericton in the Baltic Sea. pic.twitter.com/PyxNqrqVGM

Harper was on the Canadian ship for nearly 20 hours. Canadian Defense Minister Jason Kenney was also on board with journalists and pointed to two alleged Russian warships in the distance. Kenney told journalists that it is not unusual for the Russian navy to monitor the NATO exercises from a distance and the vessels posed no danger to the Canadian frigate.

"Their posture is monitoring, not a threatening posture and the commander tells me the Russian ships have been acting very professionally in terms of keeping a respectful distance and not acting in a threatening way," the minister said.

After docking, Harper told crew members that they had to take part in the NATO naval drills in the Baltic Sea because of Russian President Vladimir Putin.

"Mr. Putin's recklessness threatens global stability, regional stability, and has spread fear among our Eastern allies. That, my friends, is why you, the men and women of the Royal Canadian Navy, are here," he said.

© Flickr / Medien Bundeswehr
Putin Calls Fears of Russian Attack on NATO 'Insane'
These days, NATO is holding large-scale exercises in the Baltic Sea and on the ground – in Poland, Lithuania, Latvia and Estonia. NATO representatives have repeatedly claimed that the exercises were dictated by the need to counter "the Russian threat".

Earlier, Russian President Vladimir Putin said in an interview with the Italian newspaper Corriere della Sera that it is "insane" to expect that Russia would attack NATO countries. Some countries just gamble on concerns over Russia, the president added.

Russian envoy to NATO Alexander Grushko, in his turn, said the increased activity of NATO in Eastern Europe poses a threat to the provision of the Founding Act on mutual relations between Russia and the alliance. The Russian Defense Ministry said it considers the NATO exercises near the Russian border unfriendly.