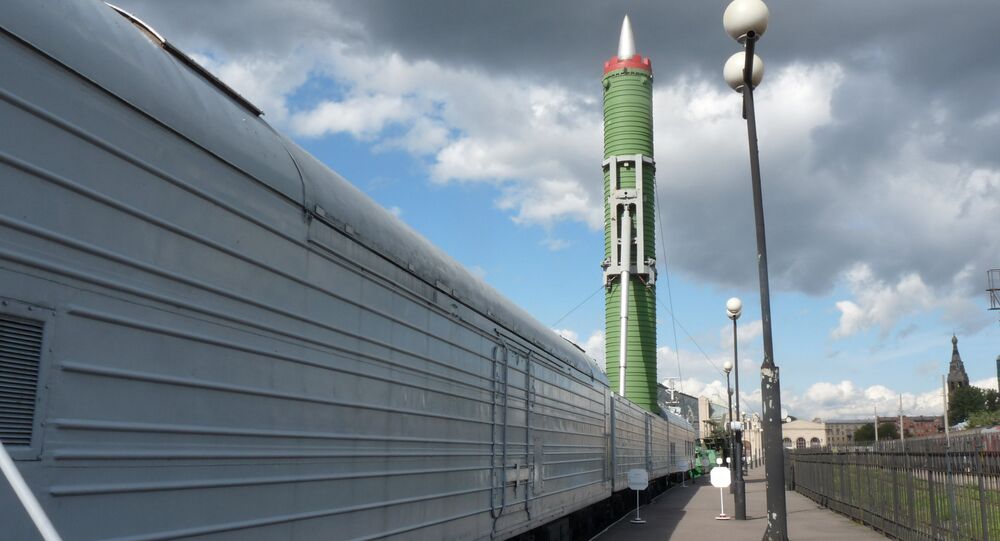 Russia finalized the project of a new Combat Railway Missile Complex (BZhRK) that will multiply its nuclear potential and counter the US Conventional Prompt Global Strike, RG.ru reported.

The two superpowers, the Soviet Union and the United States of America, chose different structures for their nuclear arsenals. Washington gave preference to ballistic missile submarines as the basis of the US Strategic Nuclear Forces. Moreover, the West managed to cover the global ocean with acoustic stations that tracked the movement of Soviet subs.

In 1987, the USSR decided to place its missiles on railways, taking the advantage of its giant and multipath railroad network, in which a train could hide from satellite reconnaissance. Each of the 12 Soviet ‘nuke trains' was armed with three RT-23 Molodets (SS-24 Scalpel) intercontinental ballistic missiles (ICBMs) carrying 10 warheads. The trains looked like refrigerator cars from the space.

© Sputnik / Sergey Kompanichenko
The combat railroad missile system that was handed over to the October railroad's central museum at Varshavsky station, St. Petersburg, in 2006.
© Sputnik / Mikhail Voskresensky
Russian Next-Generation Armata Tank to Receive Bigger Gun
Russia completely decommissioned these trains in 2007 in accordance with the START II treaty. The new project, codenamed "Barguzin" after a strong Baikal wind, is not subjected to the treaty and surpasses its predecessors in capabilities.

Every "Barguzin" train will be armed with six ICBMs RS-24 Yars (a land equivalent of the submarine-launched Bulava).

The new "nuke train" is similar to a nuclear-capable submarine in its function. The cars are so hard that they can resist an explosion of a nuclear warhead just several hundred meters away. A train can run for a month autonomously and pass up to 1,000 kilometers daily.

© Sputnik / Vladimir Pesnya
Russia to Produce Successor of Tu-160 Strategic Bomber After 2023
The missiles are brought into firing position within minutes. Their engagement range is 10,000 kilometers and precision is 100 meters around the target. The warheads can maneuver to penetrate any existing missile defense system.

The trains will be protected with a cutting-edge stealth technology, electronic warfare systems and counterterrorism measures.

Five "Barguzin" regiments are expected to enter Russia's SMF by 2020.