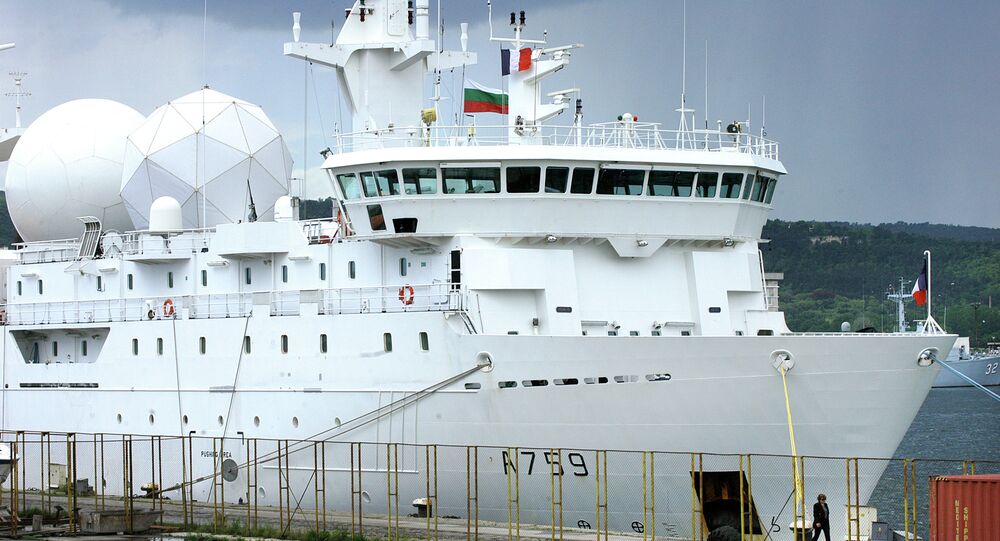 A French Navy intelligence ship, the Dupuy de Lome, has passed through the Bosporus and Dardanelles straits to enter the Black Sea, a military-diplomatic source told RIA Novosti Wednesday.

ISTANBUL (Sputnik) — Dupuy de Lome has come to replace the US Navy destroyer USS Ross, which earlier in the day left the Black Sea after completing the joint exercises with the Ukrainian Navy.

"French reconnaissance ship Dupuy de Lome has passed through the straits of the Bosporus and Dardanelles and entered the Black Sea," the source said.

YouTube / Commander, U.S. Naval Forces Europe-Africa
US Navy Releases Videos of Su-24 Flying Near USS Ross
Dupuy de Lome is equipped with technology to intercept all current types of transmissions, including e-mails and cell phone conversations. The ship was already in the Black Sea in April and May 2014.

The US Navy Arleigh Burke-class USS Ross (DDG-71) guided-missile destroyer entered the sea on May 21 in support of the so-called Operation Atlantic Resolve, designed to reassure its NATO allies of Washington's commitment to collective security in the region.

© AFP 2020 / ANTON STOYANOV
French Reconnaissance Ship to Enter Black Sea
On Saturday, a source in the security forces of the Black Sea peninsula of Crimea said that unarmed Russian Su-24 attack planes were scrambled to intercept the USS Ross that was traveling along the border of Russian territorial waters, forcing it to retreat to neutral waters.

NATO has been boosting its military presence, including holding military drills, in Eastern Europe and in the Black Sea since 2014, citing security concerns over Russia's alleged participation in the armed conflict in Ukraine.