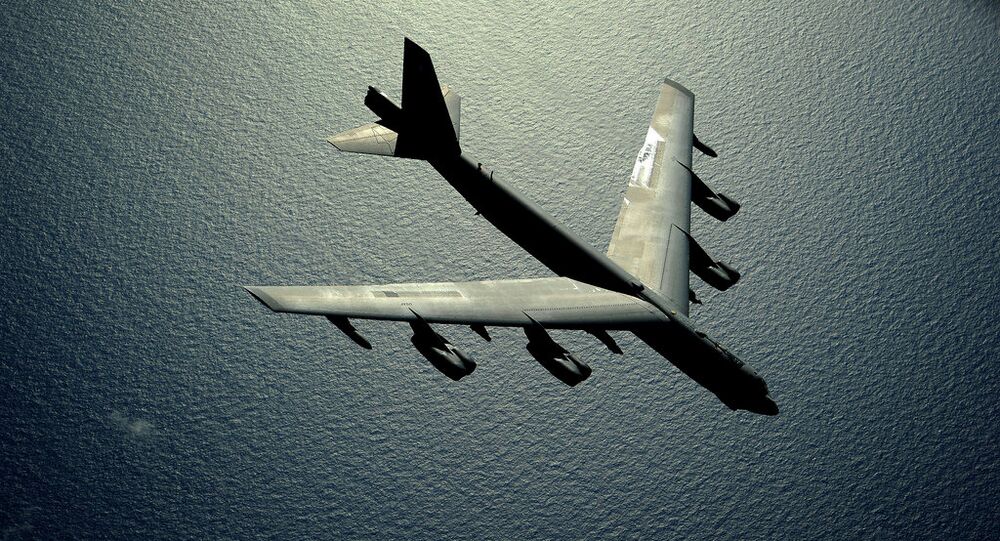 Sweden is doing its best to send Moscow a "security political signal." The country's armed forces are getting set to take part in two NATO military exercises next week, including an exercise featuring two American B-52 strategic bombers flying from the US to simulate the dropping of naval mines on the Swedish coast, Radio Sweden reports.

The exercise featuring the B-52s, codenamed Baltops, is set to take place between June 5-20, featuring 4,500 personnel, 50 ships and over 50 combat aircraft. The bombers themselves are set to fly non-stop from the US and back, dropping a payload of simulated mines outside Ravlunda, southern Sweden on June 13. This will be the first time that B-52s will carry out exercises over the country, with the operation aimed at simulating the defense of the coast from a hypothetical Russian naval invasion.

Debating the exercise in the country's parliament, ruling coalition Green Party MPs expressed their unease over the presence of the bombers, with party foreign policy spokesman Walter Mutt saying that the B-52 is associated with the Vietnam War in the minds of many Swedes.

Commenting on the exercises, military spokesman Major General Karl Engelbrektson noted that in addition to its efforts to work out "different operative capabilities," they are also meant to send "clear security political signals that we do these things together with others." Engelbrektson emphasized that "how Russia interprets that, they can decide for themselves."

© Flickr / US Department of Defense Current Photos
Sweden to Participate in Jet Exercises With NATO Members
Baltops is just one of three NATO-led exercises the country is participating in between May and June. On Monday, an 11-day, nine-country exercise involving 115 combat aircraft and 3,600 personnel is set to begin over Sweden and northern Norway, with Sweden providing 16 Gripen multirole fighters. The exercises will involve simulated bombing runs on ground targets, airborne attacks, anti-air artillery, low-level flying and mid-air refueling, all ostensibly aimed at coordinating efforts in cooperation between NATO countries, Sweden, Finland and Switzerland.

Last week, Swedish personnel began their participation in Open Spirit 2015, a NATO-led naval exercise in the territorial waters of Estonia involving the search for unexploded naval ordnance left over from the first and second world wars.

© Sputnik / Vitaly Podvitski
Got-Land? We Got Mines!
Remarkably, Swedish media explained earlier this week that the country's armed forces are also seriously considering mining the island of Gotland, about mid-way between mainland Sweden and Latvia in the Baltic Sea, in the interests of staving off another hypothetical full-blown Russian invasion.

Despite its formal non-aligned status, Sweden has seen regular, albeit secret, security cooperation with NATO since the 1960s. Cooperation has increased significantly over the past several months, with Swedish efforts to improve cooperation with NATO serving as part of the growing anti-Russian paranoia sweeping through Sweden. The country's media has repeatedly reported sighting invisible Russian subs lurking off the country's coast, alleged that Russian fighter planes of flying provocatively close to the border, and accused Moscow of stepping up its espionage through the country.

© Sputnik .
Baltic States Boost Intelligence Cooperation Over 'Submarine Threat'
Recently commenting on Sweden's growing integration with NATO, Swedish Left Party chairman Jonas Sjostedt noted that by growing its cooperation with NATO, Sweden is factually abandoning its ability to conduct an independent foreign policy, and "to fight for peace and disarmament. NATO is an alliance of states with nuclear weapons, but we don't want any nuclear weapons," the politician noted.
...
Reddit
Google+
Blogger
Pinterest
StumbleUpon
Telegram
WhatsApp
936

Sweden Claims Russian Bombers Too Close to Its Borders

Sweden to Participate in Jet Exercises With NATO Members