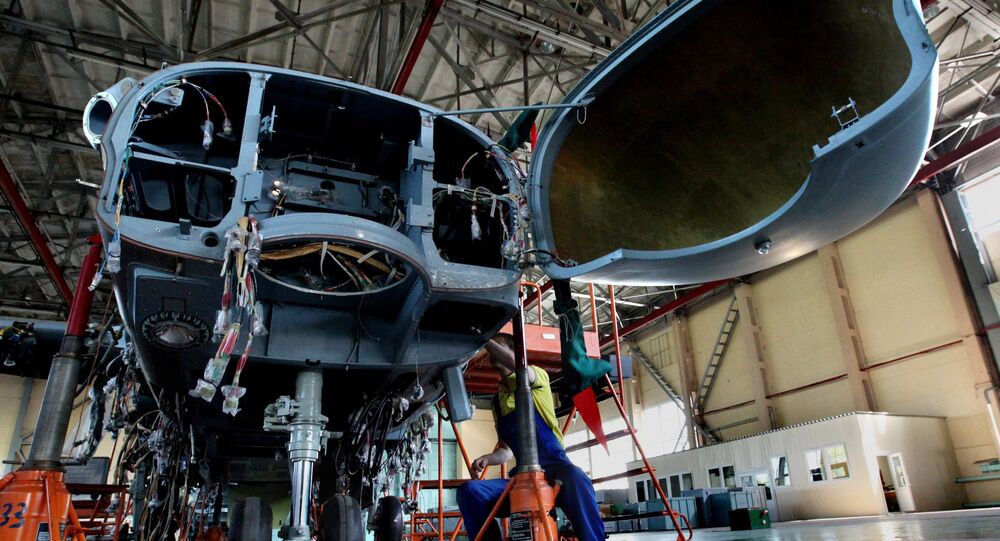 Ukrainian company Motor Sich will not participate in the creation of a Russian-Chinese helicopter, Yuri Tereschenko, head of Ukraine’s State Export Control, said.

© Sputnik / Mikhail Voskresenskiy
Russia Produces Helicopter Searchlights for Leading Global Manufacturers
Thus, Tereschenko refuted the claims by Alexander Mikheev, director of Russian Helicopters Corporation, who earlier on said that Motor Sich would be engaged in the project and the contract is planned to be signed in late-2015.

The roadmap has been signed and participants of the project have been assigned, Mikheev said.

Nevertheless, he did not provide any detailed information on the project saying it is now kept "confidential."

He assessed the market for the new helicopter in 200 units.

Earlier it was reported that the joint engineering piece by Russian Helicopters and Chinese company Avicopter (AVIC). The product is entitled Advanced Heavy Lift (AHL) and will similar in its role to the Mi-26 heavy military and transportation helicopter. However, the newly designed helicopter will be more suitable for commercial usage.

© Sputnik / Roman Antonov
Russia Expects Formal Notice on Launch of KA-226T Helicopter Production in India
The helicopter will be lighter than the Mi-26 (38.2 tons against 56 tons of takeoff mass). It will be capable of carrying a payload of nearly 10 tons (in the bay) and up to 15 tons (on the exterior mounting). The final design of the helicopter will be approved by the end of 2015.

Motor Sich is one of the leading post-Soviet producers of gas-turbine engines. It is the largest supplier of turboshaft engines for the Russian helicopter-manufacturing industry.