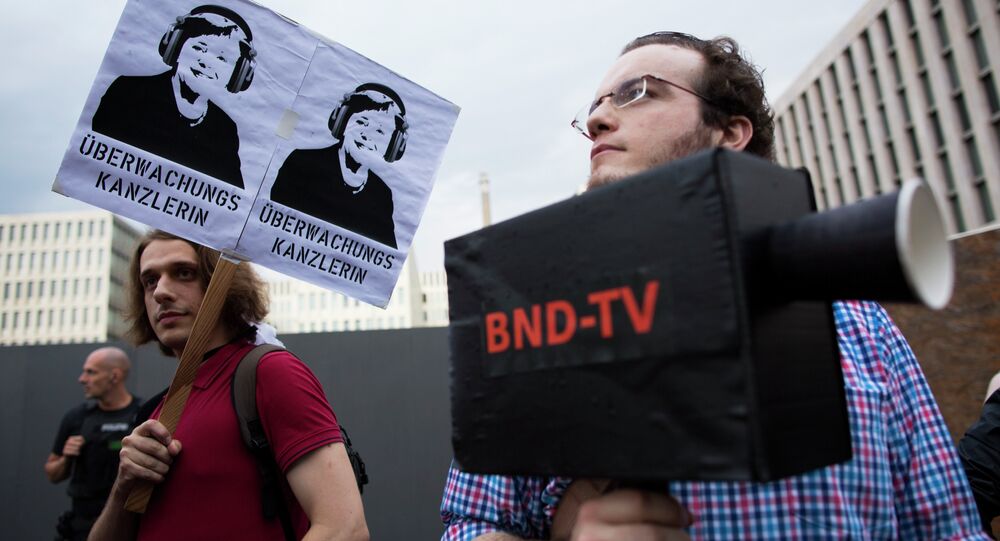 German Chancellor Angela Merkel has been heavily criticized for failing to come clean over what she knew about her government's involvement in mass surveillance by the US National Security Agency when addressing parliament on Thursday.

© AP Photo / dpa,Stephan Jansen
German Lawmakers Press Merkel to Grant Access to NSA Spy Targets in Europe
Merkel was giving a statement to the Bundestag, during which it has widely been expected she would have disclosed more details of what she knew about Germany's intelligence service, the Bundesnachrichtendienst (BND), assisting the US National Security Agency (NSA) in collecting intelligence in Germany.

It was alleged that the BND assisted the NSA to conduct intelligence surveillance on top officials at the French Foreign Ministry, the Elysee Palace and European Commission. The revelations came on the back of the German Government being accused of lying to its parliament, the Bundestag, when it denied any knowledge of such collusion involving surveillance of European governments and businesses, including the French Presidency, the European Commission and Airbus.

However, it later emerged that two documents, seen by the newspaper Bild, were sent by the BND to the German Chancellery dating back to 2008 and 2010, informing it of the NSA activities. It said an unnamed source from the German parliamentary committee on the US spying agency, said Berlin chose to remain silent and close its eyes to the information in order to avoid "endangering cooperation" with Washington and the NSA.

The revelations that Merkel's own government was fully co-operating with the NSA all the time has shocked many in the country. However, Merkel has been quiet over how much she was aware of the BND-NSA program.

She neglected to make any comment on the issue when addressing the Bundestag on Thursday, prompting Left Party leader Gregor Gysi to accuse Merkel of avoiding coming clean with the Bundestag on what he called the US treating Germany "as an occupied enemy territory".

Konrad Werner: Either Merkel is lying or the BND is out of control https://t.co/NFwmt1x8rb via @sharethis

SPD parliamentary party leader Thomas Oppermann stressed that cooperation between the BND and the US Secret NSA should only continue in the future on a "clear legal basis".

An opinion poll, published by the Stern newspaper on Wednesday, revealed that 37 percent of respondents felt deceived by Merkel after she promised in her 2013 pre-election campaign to put an end to NSA snooping.