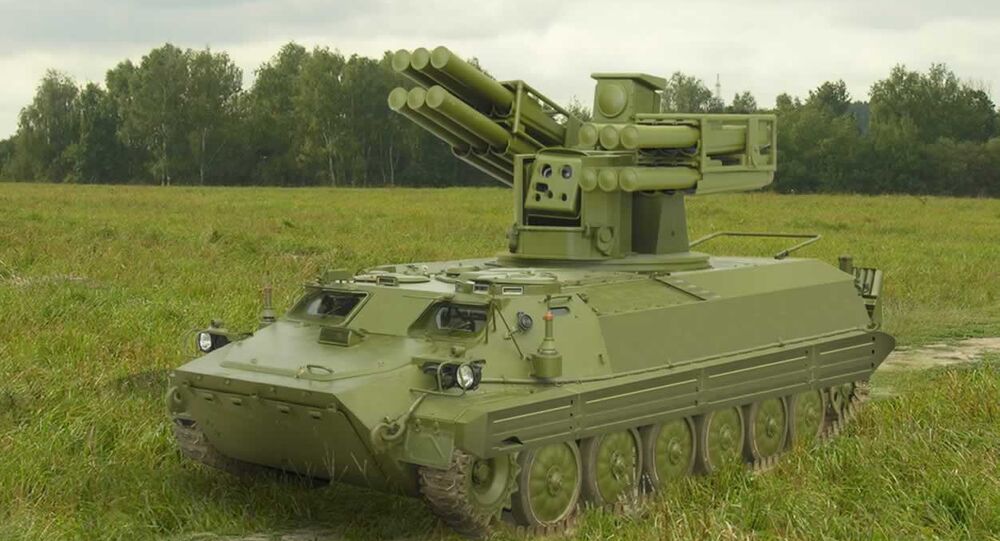 The system, dubbed Sosna, is expected to replace Strela-10M air defense systems in service with the Russian armed forces.

“Last year, we successfully completed the preliminary tests of this system. In summer, the state trials of the system at testing grounds of the Land forces will begin,” Tochmash Managing Director Vladimir Slobodchikov said.

© Sputnik / Host Photo Agency
New Russian Kurganets-25 IFV Uses 'Playstation' Controller
“The outcome of the trials will determine whether this system will be put in service with the Russian Army,” Slobodchikov said.

According to Tochmash, the Sosna system “is intended to protect against all types of air threats including high-precision weapons like cruise missiles and guided aircraft missiles in the area of the system responsibility: in range – up to 10 km, in altitude – up to 5 km.”

Slobodchikov noted that a number of foreign countries, including those of the South-East Asia region and the Middle East, have shown interest in acquiring the Russian Sosna system.

Sosna participated in recent military exhibitions in South Africa and United Arab Emirates and will be exhibited in Peru and Brunei.

"Everyone is following this newest system very closely and waiting for the completion of state trials in Russia," Slobodchikov noted.

Russia’s Tochmash design bureau will take part in the development of a new short-range air defense system together with Belarus, the Tochmash Managing Director said.

“We are planning a joint project in the framework of the Union State of Russia and Belarus to develop a new short-range air defense system,” Slobodchikov said, adding that the work is expected to start in 2016.

Russia and Belarus are closely integrated and are co-members of several regional supranational unions.

© Sputnik / Igor Zarembo
Russian, Belarusian Paratroopers Begin Drills in Belarus
The most comprehensive of these, the Union State, includes consolidation of the countries’ foreign and defense policies.

As part of their close military cooperation, the two countries coordinate air defense systems and routinely conduct joint military drills, both on a bilateral basis and as part of the six-member Collective Security Treaty Organization.

Russia’s Tochmash design bureau is a leading research institute specializing in the development and manufacturing of military equipment. Established in 1934, the company now operates under Russian nuclear corporation Rosatom.