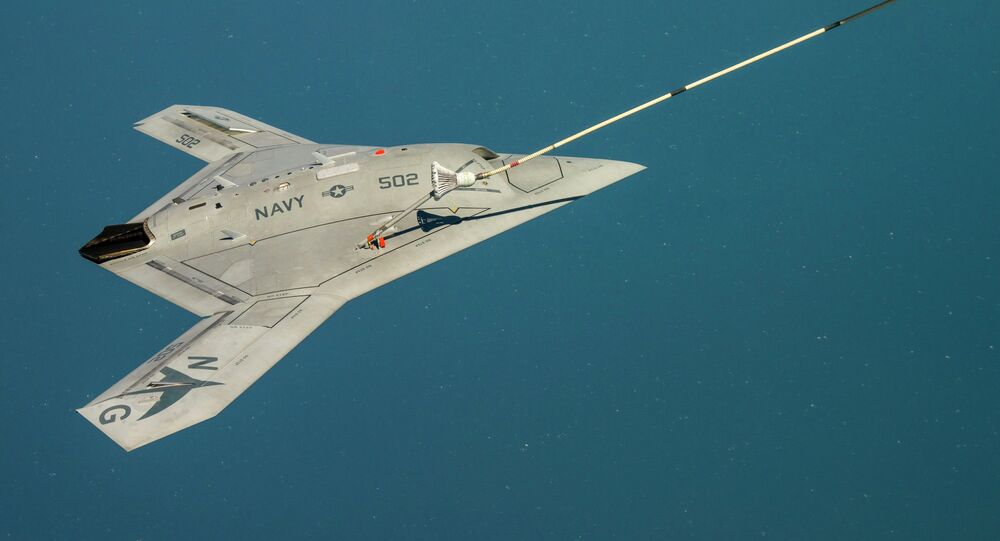 The multi-billion dollar UCLASS is the Navy’s project to develop an unmanned aircraft able to be launched from aircraft carriers to provide strike capability, surveillance and air support. The project has experienced delays amid the debate about what features should have priority, given costs and available technology.

© Flickr / Department of Defense/ Marvin Lynchard
End of Top Gun? Navy Sees Future Not in F-35s, But in Unmanned Aircraft
WASHINGTON (Sputnik) — The debate over whether the US Navy’s Unmanned Carrier-Launched Airborne Surveillance and Strike (UCLASS) system should prioritize intelligence gathering or strike capability is delaying the development of the drone and potentially raising long-term costs, the US Governmental Accountability Office (GAO) said in a report on Monday.

“Requirements emphasizing a strike role with limited surveillance could be more demanding and costly.”

Estimates of when several milestones, including the decision of which defense contractor will build the system and the date of first flight, have been delayed from two-to-four years.

© AP Photo / U.S. Navy
US Unmanned Aircraft Must Be Fully Capable for Long-Term Missions - McCain
US defense contractors Boeing, General Atomics, Lockheed Martin and Northrop Grumman are designing and testing various versions of a future UCLASS, each with different features and strengths.

The Navy will ultimately decide which UCLASS to develop in accordance with surveillance, endurance and strike capabilities as well as priorities given the budget environment.

GAO said that the US Congress, Department of Defense and the Navy should decide on what features the UCLASS will possess before moving forward and develop a business plan to execute development. Otherwise, the Navy risks wasting time and resources in the development of the advanced carrier drone.

“The knowledge the Navy has obtained about the resources needed to develop the UCLASS system may no longer be applicable depending on what requirements are finally chosen,” GAO said.

“If the final UCLASS requirements emphasize a strike role with limited surveillance, the Navy will likely need to revisit its understanding of available resources in the areas of design knowledge, funding, and technologies before awarding an air system development contract.”

© Flickr / Department of Defense/ Marvin Lynchard
End of Top Gun? Navy Sees Future Not in F-35s, But in Unmanned Aircraft
The US Navy currently estimates the UCLASS will be deployed to at least one aircraft carrier not earlier than 2022, however, the GAO mentioned in the report that date could be set back by further delays.

US defense hawks such as Senator John McCain have argued that the UCLASS should have intelligence, surveillance and strike capability, but under the present funding environment it is uncertain whether the budget is there for such an advanced drone with multiple capabilities.