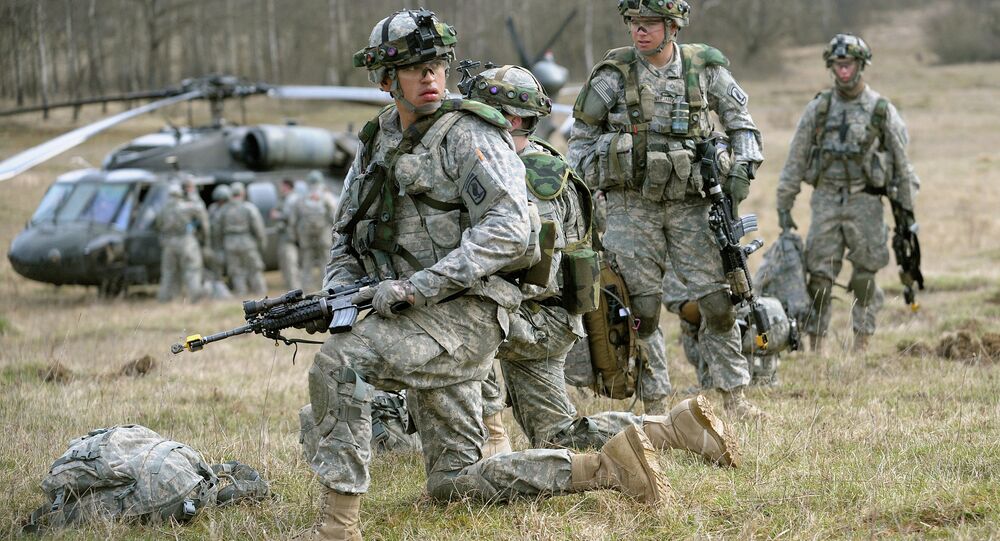 Commenting on the arrival of 300 US paratroopers in Lviv, western Ukraine, former US diplomat and Senate staffer James Jatras told Radio Sputnik that the initiative risks undermining the fragile peace in eastern Ukraine, and does absolutely nothing for US security interests.

© Sputnik / Vitaly Podvitski
Breach Of Contract?
Late last week, US paratroopers from the 173rd Airborne Brigade began a six-month training rotation with Ukrainian National Guard forces. Commenting their arrival, Jatras explained that "it's quite clear that these [drills] are intended to increase the combat effectiveness of the Ukrainian forces."

This, according to the expert, "could be understood as something that is directly meant to undermine the Minsk II agreement, and to support those elements in Kiev who still believe there is a military solution to the political problem in eastern Ukraine."

In Jatras' view, the training initiative, involving 900 Ukrainian troops, is obviously not an initiative meant to increase US forces security or US national security. Rather, it will only go toward supporting "our political protégés in Kiev and to bolster the more militant elements there."

Some of the US troops in #Ukraine to train soldiers pic.twitter.com/7PZ55wlBlr

Moreover, with British and Canadian armies also set to participate in the training exercises, Jatras notes that "one of the concerns raised in Western countries is [whether] this training will be limited to the Ukrainian army," or whether it will "also include some of the more radical 'neo-Nazi-type' elements like the Aidar and some of the other militias."

Calling for "direct contact between Kiev and the leaders of the Lugansk and Donetsk republics toward a political settlement," Jatras notes that US troops arrival in western Ukraine risks only to undermine the fragile ceasefire in the region:

"All we really have right now is a truce -a ceasefire. It has been holding, although there have been some violations of it over the course of the last few weeks. But I don't see how this kind of activity on the part of the US as well as the Canadian and British governments does anything to turn the corner on turning a ceasefire into a political settlement."

The expert ominously warns that in addition to seeing the war in eastern Ukraine once again burn out of control, there is a danger that Washington's initiative could result in a wider war between Russia and NATO: "Even though Ukraine is not a NATO member, you have officials in Washington talking about our commitment to Ukraine as though it were already a member of the alliance, and that creates some potential tripwires that could result in a wider war."

© Sputnik / Vitaly Podvitski
These Boots Were Made For Walking
Ultimately, Jatras believes that the US, British and Canadian initiative to send advisors to train the Ukrainian military does not make the NATO alliance more secure, and on the contrary, serves only to aggravate and escalate tensions.

In addition to the 300 US troops, Canadian Prime Minister Stephen Harper said last week that his government would deploy up to 200 Canadian troops to Ukraine, with 75 British military personnel already deployed in the country for training operations.