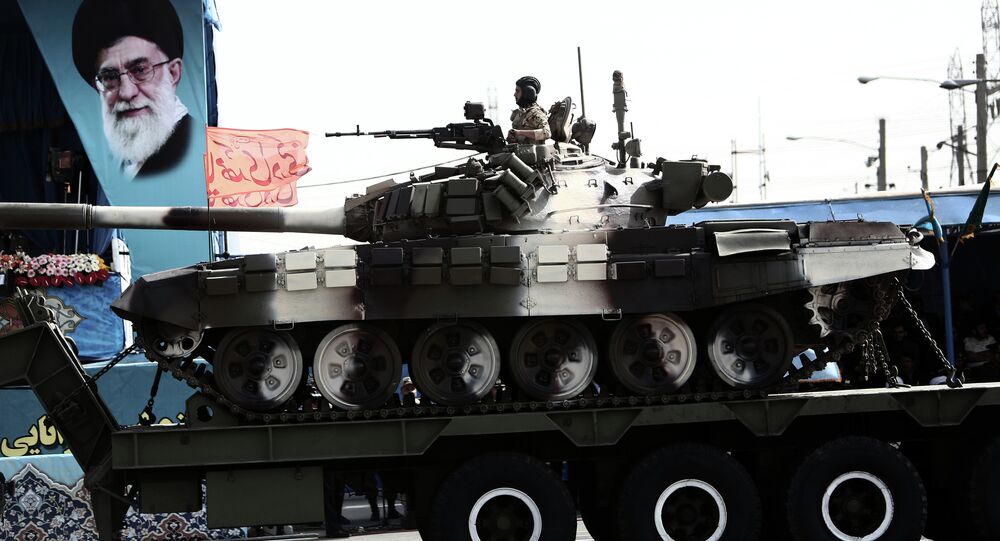 The parades were held in front of the mausoleum of the founder of the Islamic Republic of Iran, the late Imam Khomeini in southern Tehran. President Hassan Rouhani was present on the occasion.

The remote-controlled robot is equipped with four-wheel drive system and can be programmed for scouting and combat missions within an operational range of 2 kilometers.

Capable of carrying loads up to 600 kg, the robot can be armed with machine guns, air-defense or anti-armor missiles.

Also unveiled was a 23 mm caliber sniper rifle that can hit targets within a range of 4 kilometers with anti-armor bullets. ‘Baher’ weighs 62 kg and requires 3 crew for firing.

The other sniper rifle was a modified version of "Shaher" that is equipped with a 5-round magazine.

© Sputnik / Pavel Lisitsyn
Iran Being Threatened by Israel, Has Right to Self-Defense – UK Politician
Another product was a 4-ton Ultra-Light Vehicle (ULV) capable of traveling 100 km/h in difficult terrains and 130 km/h on gravel roads. It can be armed with an automatic machine gun and used in the reconnaissance and combat tasks.

Recently, Iranian military experts and technicians have made great progress in manufacturing a wide range of local equipment, making the armed forces self-sufficient in the arms sphere.

Iran has made it clear that its military poses no threat to the regional countries, and that the manufacturing of arms is entirely based on defense.