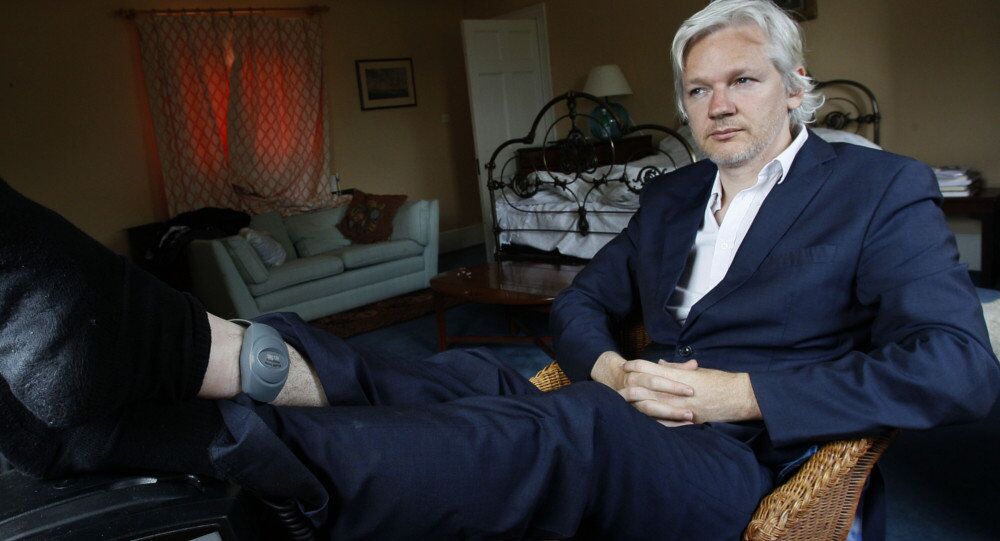 According to Australian lawyer, WikiLeaks co-founder Julian Assange is expected to speak on the abusive practices of intelligence agencies as part of a panel on international surveillance and privacy on Wednesday.

© AP Photo / Kirsty Wigglesworth
Five Years After Collateral Murder: Whistleblowers Assange, Manning Still Only Ones Imprisoned
MOSCOW (Sputnik) – WikiLeaks co-founder Julian Assange is expected to speak on the abusive practices of intelligence agencies as part of a panel on international surveillance and privacy on Wednesday, his Australian lawyer said.

Assange will address a conference of lawyers in Glasgow, Scotland, via video link from the Ecuadorian embassy in London, where he has been living since mid-2012. The activist cannot safely leave the embassy while he faces extradition to Sweden over an allegations of sexual abuse.

His long-time attorney in Australia, Jennifer Robinson, said on Twitter she will be joined by Assange to discuss international intelligence gathering, abuse of power and privacy.

The 43-year-old whistleblower claims that the charges against him are politically motivated and would justify a possible rendition to the United States, where he faces espionage charges for leaking classified data on US atrocities committed during the Iraq war. Assange's key informer, Chelsea (former Bradley) Manning, is serving 35 years in a US prison.

Assange and his WikiLeaks website have been under pressure from the US government following the release of documents and files, including a video of a US military helicopter firing at civilians in Iraq, that document a wide range of illegal activities.

The Australian fugitive became an inspiration for whistleblowers, most notably Edward Snowden, ex-employee of a contractor of the US National Security Agency. In 2013, documents and files leaked by Snowden revealed that the agency illegally spied on allied leaders and millions of Americans.