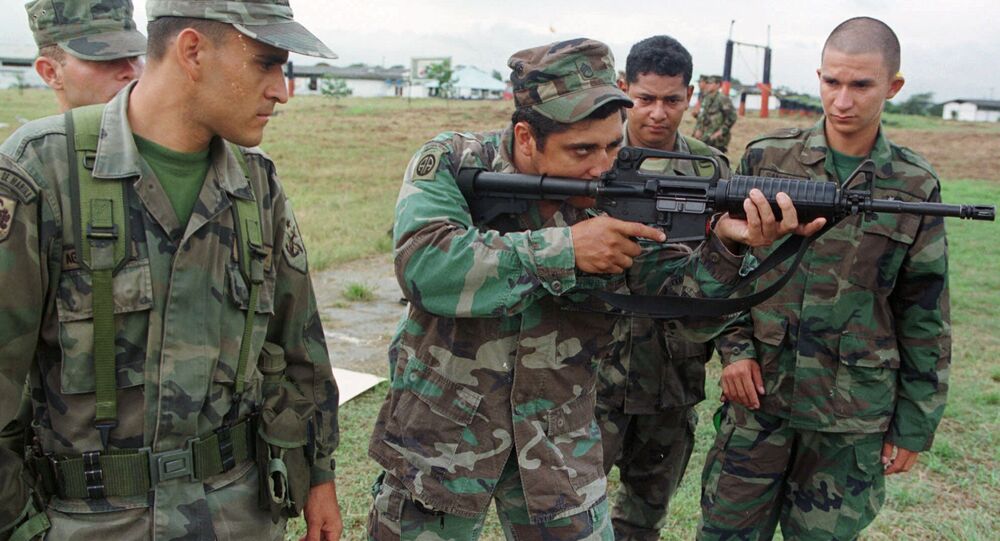 The United States Army says it will investigate allegations of rape, committed in the mid-2000s by its personnel and contractors in Colombia, which were published in a recent report on the country's conflict with rebel militias.

A section of the 800-page document titled "Sexual Imperialism," describes the rape of 53 girls in the towns of Melgar and Girardot — rapes which were filmed and sold as pornography. Another case — well-known in Colombia — of a 12-year-old raped by two Americans in 2007 was also included in the report. The two men were removed from Colombia and never indicted.

"There is abundant information of sexual violence with total impunity, thanks to bilateral accords and diplomatic immunity to US officials," the report says, referring to the Status of Forces Agreement (SOFA) which gives the US military — not local law enforcement — jurisdiction over crimes committed by "on-duty" personnel.

"Special agents from the US Army Criminal Investigation Command are currently coordinating with Colombian authorities and will initiate an investigation into any credible allegations of sexual assault or criminal acts committed by US soldiers while in that country," Chris Grey, spokesman for the Army's Criminal Investigation Command told USA Today on Friday. "We take this issue very seriously and will aggressively pursue all credible allegations."

Colombia's Historical Commision on Conflict and its Victims released the landmark report in February. It analyzes the 50-year-long conflict between the Colombian government and FARC, listed as a terrorist organization by Colombia, the United States, the European Union and a number of other countries. The report was commissioned by both parties as they negotiate and end to the conflict which has claimed over 200,000 lives.

The US has long supported the Colombian government militarily and financially in their fight against FARC, despite allegations of human right abuses on the part of state forces. Along with allegations of sexual assault, the US has been accused of effectively supporting military death squads.

"Despite overwhelming evidence of continued failure to protect human rights the State Department has continued to certify Colombia as fit to receive aid. The US has continued a policy of throwing ‘fuel on the fire’ of already widespread human rights violations, collusion with illegal paramilitary groups and near total impunity," says Amnesty International of US involvement in Colombia.

Rape by Military Personnel Not Unique to Colombia

On the subject of sexual violence, the Commission's report went on to note that such abuses are "similar to the effects produced in every location where you find the United States military, like the Philippines, Japan or South Korea."

Indeed, there is a long history of sexual assault with impunity by US military personnel on bases abroad, which has sometimes led to resistance to the presence of bases themselves.

The island of Okinawa, in particular, has been rocked more than once by protests sparked by reports of soldiers raping local girls. SOFA came under particular fire in 1995, when three service members kidnapped a 12-year-old girl, beat her, duct taped her eyes closed and raped her in a van.

Even though the crime was committed off base, military authorities took them into custody and the delay in handing them over to the Japanese caused public outrage. Around 85,000 people came out to the street at one point to protest the continued US military presence on the island.

Another rape case on Okinawa  in October 2012 — which did result in a conviction for 2 US soldiers in a Japanese court — reignited protests and resulted in a period of curfew for US servicemembers on the Island.

Historian Chalmers Johnson, in his history of US military intervention gone wrong, Blowback, explains that Okinawa, between 1988 and 1995 had courts martial for military personnel on rape charges at twice the rate within the US population as a whole. And considering the barriers, both cultural and legal, to those prosecutions, the true rate must in fact, have been much higher.

April is Sexual Assault Awareness and Prevention Month for the US Department of Defense, which mainly focuses on sexual assault within the ranks of the US military.

According to data in a report by the Government Accountability Office in March, more than 1,000 male and 4,000 female service members reported sexual assault in 2014.

A 2013 report by the Center For American Progress recognizes that though there are confirmed reports of sexual abuse abroad, such as the Okinawa case above, "there is simply no way to know how many civilians have been affected."

Okinawa Population Grows More Angry Over US Military Base in Region

Latin American Countries Want to Remove All US Military Bases

US Military Base Row on Okinawa Worsens as Tokyo Shows Resistance