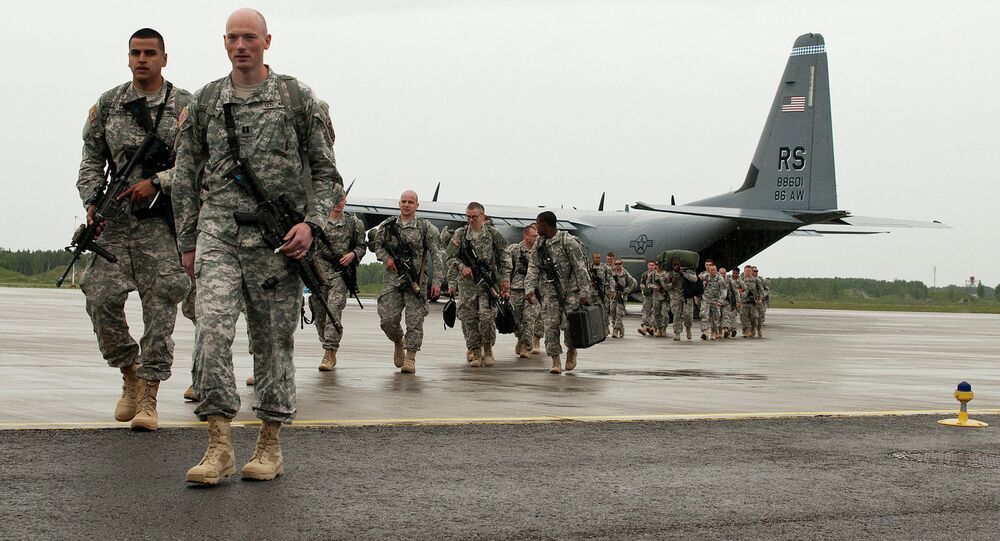 © AFP 2020 / PETRAS MALUKAS
US Tanks, Paratroopers to Arrive in Estonia for Military Drills This Week
The exercises, set to take place between March 19 and April 17, will include low flights simulating attacks on ground targets to be held at the Estonian Defense Forces' central firing range in the north of the country. Estonian forces will train alongside the USAF's 510th Fighter Squadron, regularly based at the Aviano Air Base in Italy. Over the course of the exercises, American forces will be based at the Amari Air Base in northwestern Estonia, about 40km from Tallinn, the country's capital.

Colonel Jaak Tarien, Commander of the Estonian Air Forces, told Estonian Public Broadcasting that he hopes "that the people of Estonia will appreciate the sound of freedom over our skies and that people will support the exercises."

Tarien added that the "upcoming exercises are the first stage in the implementation of promises made to us by our allies. The US defense budget for 2015-2016 has committed $24.7 million for the development of the airbase in Amari. This is a clear sign that our allies – the United States, have long-term plans for a presence in Estonia, and similar exercises will be held here on a regular basis."

Nearly 300 US Armed Forces personnel are set to accompany the Air Force Squadron arriving in the country, with Abrams tanks and other heavy equipment, along with paratroopers beginning to arrive for the Siil 2015 exercises in May, which are to involve a total of 13,000 Estonian and US personnel.

Last month, Estonian and US forces held a parade marking the country's independence at the border city of Narva, just 300 meters from the Russian border. The Estonian government had earlier announced a 40 million Euro ($42.5 million) military infrastructure development program aimed at accommodating NATO forces on its territory.
NATO has been strengthening its military presence along Russia's western border amid the conflict in southeastern Ukraine, claiming Moscow's involvement. Russia has repeatedly stressed that it is not party to the Ukraine crisis and has expressed concern over the expansion of NATO forces along its borders.

Last month, NATO countries' defense ministers agreed on the creation of six new command and control posts in Bulgaria, Estonia, Latvia, Lithuania, Poland and Romania during a meeting in Brussels. The ministers also announced that NATO's Response Force would be increased from 13,000 to 30,000 personnel. Russia's envoy to the alliance, Alexander Grushko, said the decision "creates a great risk for Russia", primarily in the Baltics, which could become a region of "military confrontation."