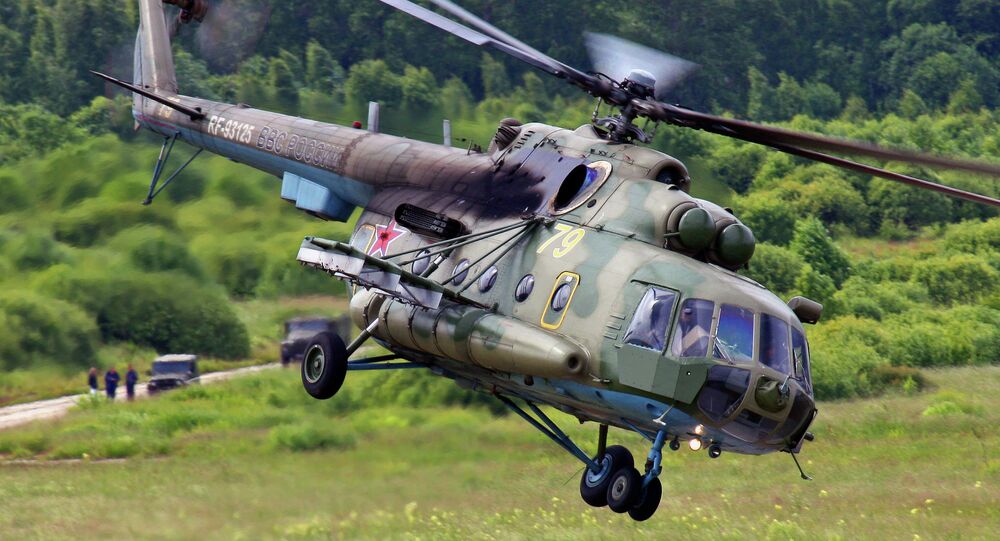 Russia's new Richag-AV radar and sonar jamming system can be mounted on helicopters, ships and other military equipment to jam potential adversaries' weapons systems from distances of several hundred kilometers away; it has been hailed by developers as having no analogue anywhere in the world.

© Sputnik / Vitaliy Ankov
Russian Navy to Receive 50 New Vessels
At a presentation for journalists in Kazan on Wednesday, Russian radio-electronics firm Radio-Electronic Technologies Concern (KRET) announced that it is handing over the first batch of a new helicopter-mounted electronic warfare system known as the 'Richag-AV' to the armed forces.

The Richag-AV system, mounted on the Mi-8MTPR1 (a variant of the Mi-8MTB5-1 helicopter) is said to have no global equivalent. Its electronic countermeasures system is designed to jam radar, sonar and other detection systems in the aims of defending aircraft, helicopters, drones, ground and naval forces against air-to-air and surface-to-air defense systems within a radius of several hundred kilometers. It can be mounted on units from any branch of the armed forces, including helicopters and airplanes, as well as ground and ship-based forces.

The Mi8-MTPR1-based Richag-AV platform, using multi-beam antenna arrays with DRFM technology, is designed to actively jam and thus 'blind' radar systems in order to defend against radio-electronic guided weapons systems. In a combat situation, the system would operate as part of an aviation shock attack group aimed at breaking through virtually any defense system, blinding everything up to and including the US MIM-104 'Patriot' anti-aircraft missile system.

US Government
US Military Satellite Explodes, Sending Chunks of Debris Into Orbit
Rossiyskaya Gazeta explained that in addition to working as a signal jamming system, Richag-AV is capable of carrying out radar-based intelligence gathering, which involves the finding of foreign sources of electromagnetic radiation. With an onboard database on different types of military installations, the system is capable of quickly determining the type of target, thus allowing it to jam it effectively.

Reporters in Kazan were informed that the Russian armed forces received three Mi-8MTPR-1 helicopters equipped with the Richag-Av on Wednesday, and will receive a total of 18 such systems by October 2016, at a total cost of 11.5 billion rubles ($186 million).

The system's predecessor, the 'Smalta' jamming system, was developed back in the 1970s, and featured a 100 km radius; in its own time the system was considered among the most effective in the world. Alongside the Richag-AV, the Russian military is presently being equipped with other electronic warfare systems, including the L-175B Hibini air and 1L269 Krasuha-2 and 1L267 Moskva-1 ground-based electronic warfare systems.

vk.com
Killer Names: The Funny Side of Some of Russia's Most Lethal Weaponry
KRET is Russia's largest radio-electronic industrial holding; it was created in 2009. The company is involved in the development and production of radio-electronic equipment in the civil and military aviation sphere, as well as air-based radar systems, electronic warfare systems, and a variety of precision instrumentation.
...
Reddit
Google+
Blogger
Pinterest
StumbleUpon
Telegram
WhatsApp
13811