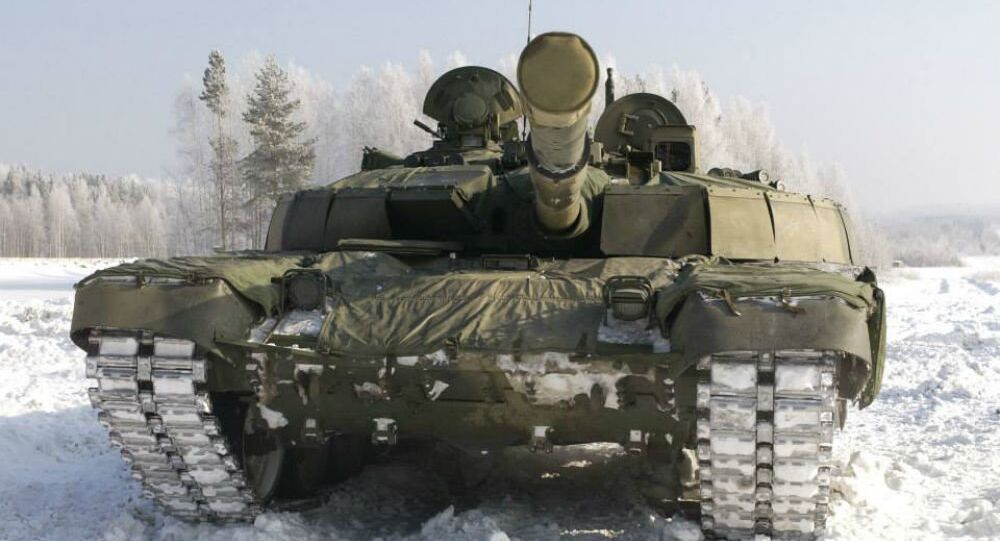 From small arms to tanks to aircraft to intercontinental ballistic missiles, Soviet and Russian military design bureaus have a long history of trolling potential adversaries by thinking up funny and endearing names for their weapons systems.

Russian tank designers seem to be some of the best-known trolls, making up understated and gentle names for their death on wheels designs. For instance, designers named the T-72B2, a heavily modernized variant of the T-72, the 'Slingshot' (Rogatka). Another modernized variant of the T-72, the T-72M1, has been nicknamed the 'Banana' (Banan). Meanwhile, the world's most powerful flamethrower system attached to a tank chassis, the TOS-1, has been given the moniker 'Pinocchio', (Buratino).

Designers of self-propelled artillery systems are just as humble, if a little less creative, naming a series of vehicles after flowers. This includes the 2S1 'Carnation' (Gvozdika), the 2S3, 'Acacia' (Akatsiya), the 2S4 'Tulip' (Tyulpan), the 2S5 'Hyacinth' (Giatsint), and the 2S7 'Pion', the last of which is capable of shooting nuclear artillery rounds. The Russian military analysis site TopWar.ru once commented on this series of weapons, noting that "it is unlikely that any potential adversary would like to smell such a bouquet."

Designers of command and control vehicles have their own interesting nomenclature. The 1V152 fire control system is interestingly nicknamed the Kapustnik, which roughly translates as 'Cabbage Festival'. Meanwhile, the 1L219 radio-location complex is known as the 'Zoo' (Zo'opark), and the RPMK-1 Radar-Meteorological Complex is called the 'Smile' (Ulyibka). The 3K60 coastal defense system, NATO reporting name Sennight, is known as the 'Ball' (as in the stately dance party).

Naturally, humorous nomenclature isn't limited to heavy armor and vehicles, either. The 9M14 anti-tank missile is affectionately nicknamed 'Little One' (Malyutka), while the RPG-18 short-range anti-tank launcher is known as the 'Housefly' (Muha). The 122-mm D-30A towed howitzer is called the 'Frog' (Lyagushka), not to be confused with the NATO codenamed short-range rocket artillery system FROG-7 (Russian designation 9K52 Luna-M).

The ground forces don't hog all the clever hardware names, either. The Mi-24 attack helicopter has brought up so many thoughts and observations from its designers and operators that it has been given a whole slew of nicknames, from the 'Crocodile' (Krokodil) to the 'Drinking Glass' (Stakan) to the more obvious 'Flying Tank' (Letayushchiy Tank). As for the Ka-50 attack chopper, designers gave it a nickname –the 'Black Shark' (Chernaya Akula), which can only be described as appropriate, given its ominous shark-like demeanor.

Attack aircraft have been treated with similarly interesting and endearing nomenclature, the MiG-15 trainer aircraft affectionately referred to as the 'Babushka' (Grandmother). The Su-27 attack aircraft has been named the 'Crane' (Zhuravlik), while the Su-25 is called the 'Rook' (Grach). NATO, which has its own rules for naming Soviet and Russian weaponry, had their own fountain of creativity to draw from, with a variety of funny names, calling the MiG-15 the Fagot, the MiG-21 the Fishbed, the Ka-25 the Hormone, and the Su-25 the Frogfoot. It is rumored that workers at the Sukhoi Design Bureau, who usually looked forward to finding out what NATO would call their latest designs, were furious that their beloved 'Rook' had been classified as the listless Frogfoot.

Just as in the army, air force naming hasn’t been limited to weapons platforms, with the 9A-4071 automatic gun hilariously referred to as the 'Little Ballerina' (Balerinka). The same is true for the navy, with designers naming the MRG-1 multi-tube ship-based grenade launcher the 'Little Fire' (Ogonyek) and the SET-65 anti-ship missile system the 'Raccoon' (Yenot).

When it comes to missile forces, some designers seem to have thought up some worryingly nonchalant nomenclature, including the ICBM RT-23 'Good Sport' (Molodets), the RSS-40 'Courier' (Kuryer), and the MS-24 chemical warhead 'Tenderness' (Laska). The tradition of being less than serious with the nicknaming of some very serious nuclear weapons goes back all the way to the early 1950s, with some of the earliest Soviet atomic bombs being nicknamed the 'Maria' (RDS-3, 30 kilotons), the 'Tatyana' (RDS-4, also 30 kilotons), and the 'Natasha' (8U49, 350 kilotons).

Logical and witty, unusual and whimsical, the nomenclature of Russian weapons designs is often marked by a sense of playfulness, endearment and perhaps even mockery which may at first seem out of place when speaking about some of the most powerful and deadly military designs the world has ever seen.