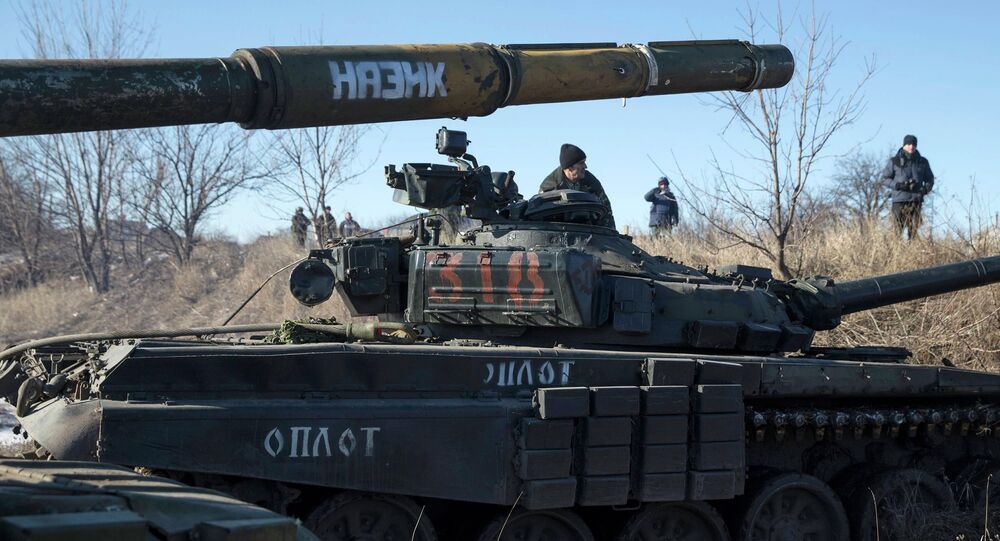 Advisor to the Minister of Internal Affairs of Ukraine Zorian Shkiryak stated that independence supporters in the country had fired the Azov battalion in Shirokino.

© Sputnik / Mikola Lazarenko
Berlin is Disappointed With Poroshenko’s Presidency - German TV Channel
KIEV (Sputnik) – Advisor to the Minister of Internal Affairs of Ukraine Zorian Shkiryak says independence fighters in the country have opened fire at the positions of Kiev forces, particularly the Azov battalion, although nobody from the Kiev side was injured.

"The minister's advisor Zorian Shkiryak, who is currently in the area of the anti-terrorist operation, has informed that today, at 20:00, terrorists opened fire at the frontline of the anti-terrorist operation forces, particularly the National Guard's attack battalion 'Azov' in Shirokino," a statement, released on the official website of Ukraine's Interior Ministry early on Sunday says.

Shirokino is a village located in Ukraine's southeastern region of Donetsk. It was considered a neutral territory before it was occupied by Kiev forces at the beginning of February.

© REUTERS / Ukrainian Presidential Press Service/Mikhail Palinchak
UAE is a Backdoor for US-NATO Weaponry Supplies to Kiev - Experts
On February 12, after 16-hour talks between the leaders of Russia, Germany France and Ukraine, Kiev forces and the militia of the self-proclaimed people's republics of Donetsk and Luhansk (DPR and LPR) signed a ceasefire deal.

Apart from a full ceasefire, the agreement stipulates, among other things, the establishment of a secure buffer zone in southeastern Ukraine through the withdrawal of heavy weaponry from the line of contact between the two sides and an all-for-all prisoner exchange.

After the ceasefire formally entered into force on February 15, the Organization for Security and Co-operation in Europe (OSCE) said that with the exception of certain locations the truce in eastern Ukraine was generally observed.

Ukrainian volunteer battalions, such as Donbas, Azov and Dnipr, were formed in April after Kiev launched a military operation against independence supporters in southeastern Ukraine. In November, the volunteer divisions, far-right in their ideologies, were put under the command of the Ukrainian Army.