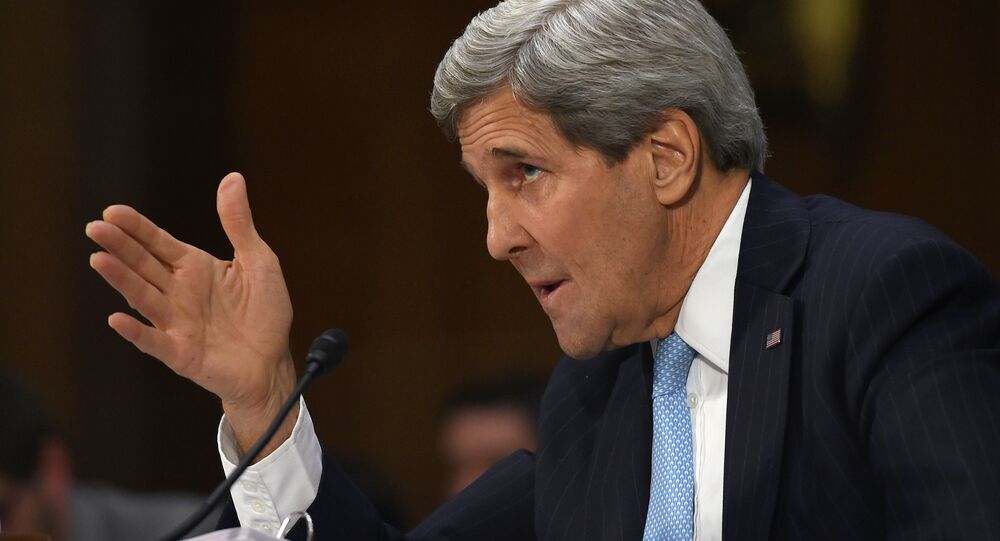 US Secretary of State John Kerry claims that the language in US President Barack Obama’s draft AUMF against ISIL in Iraq and Syria is specific enough to prevent the United States from getting involved in a new, large ground war in the Middle East.

WASHINGTON (Sputnik) — The language in US President Barack Obama’s draft Authorization for Use of Military Force (AUMF) against the Islamic State (ISIL) in Iraq and Syria is specific enough to prevent the United States from getting involved in a new, large ground war in the Middle East, US Secretary of State John Kerry said in a Tuesday US Senate Foreign Relations hearing.

“There is, in our [the Obama administration’s] judgment, no way possible for this language to be misinterpreted to allow the kind of mission creep that allows us into a long-term war,” Kerry said of the draft AUMF sent to Capitol Hill earlier in February.

© Flickr / Stephen Melkisethian
US Senators to Discuss AUMF on Wednesday
US Senate Democrat Chris Murphy asked Kerry to explain the language in the draft AUMF prohibiting US armed forces engagement in “enduring offensive ground combat operations.” The draft language has been criticized by Republicans and Democrats as being vague and undefined.

The term "enduring" was intended to mean the Obama administration would not ask Congress “to build up to a new Iraq or a new Afghanistan,” Kerry said.

Prohibiting “offensive” combat actions by the US armed forces in the fight against IS was characterized as banning the US military from being “directed to go have a firefight with ISIL [Islamic State of Iraq and the Levant] in a proactive way…That is prohibited,” he added.

The United States has been engaged in military action against the IS in Iraq and Syria since August 2014, and currently leads an international coalition to destroy the Islamic militant group.