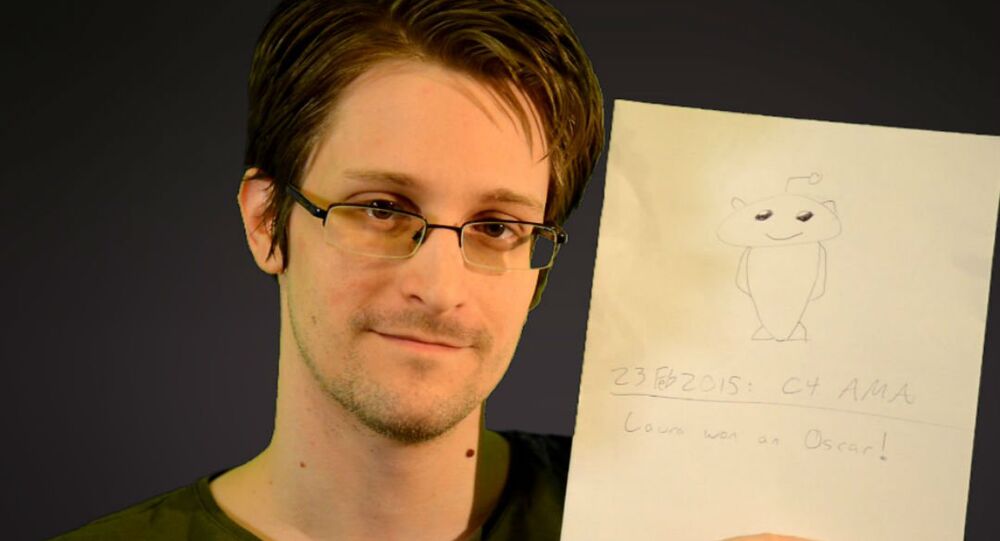 On Monday, after the film, Citizenfour, won the Oscar for Best Documentary, filmmaker Laura Poitras, journalist Glenn Greenwald and the film’s subject, NSA whistleblower Edward Snowden opened themselves up to questions during a Reddit AMA.

After a bit of a snafu, where Snowden found himself unable to post on his own AMA momentarily because moderators thought one of his accounts might be an imposter, the film’s makers and subject fielded a wide array of questions, some serious, some lighthearted.

The top ranked answer was when a user asked Snowden “would you do anything differently? If so, what?”

“I would have come forward sooner,” the former NSA contractor replied.

“I talked to Daniel Ellsberg about this at length, who has explained why more eloquently than I can. Had I come forward a little sooner, these programs would have been a little less entrenched, and those abusing them would have felt a little less familiar with and accustomed to the exercise of those powers. This is something we see in almost every sector of government, not just in the national security space, but it's very important: Once you grant the government some new power or authority, it becomes exponentially more difficult to roll it back.”

In a conversation that quickly rose to the top of Reddit’s front page, users asked Snowden about everything from why he’s not on Twitter to where the name Citizenfour came from, to questions about his glasses or whether it was true Russian spy Anna Chapman tried to seduce him (answer: “lol no.”).

Regarding his daily life in Russia, and rumors of his being “controlled” by Russian security services, Snowden asked, “If I were a spy for the Russians, why the hell was I trapped in an airport for a month? I would have gotten a parade and a medal instead.”

As for his relative freedom, despite being unwilling to “play ball” with Russian intelligence services, Snowden said “At this point, I think the reason I get away with it is because of my public profile. What can they really do to me? If I show up with broken fingers, everybody will know what happened.”

Snowden and Greenwald expressed satisfaction at the reaction to the surveillance revelations, denying that they were disappointed that they hadn’t had more of an impact,  and pointing to various moves within industry to encrypt people’s data better and to find ways for people to operate more anonymously online.

“The biggest change has been in awareness,” explained Snowden.  “Before 2013, if you said the NSA was making records of everybody's phone calls and the GCHQ was monitoring lawyers and journalists, people raised eyebrows and called you a conspiracy theorist. Those days are over.”

Assange Film in the Works?

The Oscar-winner herself, Poitras, who had to leave the conversation first, wasn’t as mobbed with questions as the film’s subject, but did let slip some tantalizing information about a possible future film project.

Poitras found herself targeted for a lot of extra airport screenings (which “thankfully have stopped”) in the process of working on a previous film, and commenters asked about her security concerns with Citizenfour. She said that because of those previous experiences, she moved to Berlin to work on the film, but that the risks weren’t a deterrent.

“Before going to Hong Kong I met with many lawyers to assess the risk. I ignored some of the warnings — for instance the Washington Post urged me not to travel to Hong Kong. Another lawyer said not to bring my cameras, ” Poitras said about taking on the story. “In the end I decided I could not live with the decision to not travel to Hong Kong.”

Asked whether she considers herself more a journalist of an artist Poitras replied: “In my mind, it's not a question about whether I am one or the other. Documentary films needs to do more than journalism — they need to communicate something that is more universal.”

(Not so) Grumpy Glenn and the Treason Joke

And there was no way this AMA was going to avoid questions about Oscar host Neil Patrick Harris who joked that Snowden “couldn’t be here — for some treason.” But the butt of the joke himself took it in stride, and shot back with a little wisdom from Patrick Henry.

“Wow the questions really blew up on this one. Let me start digging in…To be honest, I laughed at NPH. I don't think it was meant as a political statement, but even if it was, that's not so bad. My perspective is if you're not willing to be called a few names to help out your country, you don't care enough. 'If this be treason, then let us make the most of it.’”

Glenn Greenwald used the reporting of his reaction to the joke as a bit of a teachable moment “illustrating how the imperatives of internet age media and need-for-click headlines can distort pretty much everything they touch.” Greenwald had laughed about the pun but also called the joke “stupid and irresponsible.”

“Knowing that would be the click-worthy comment, BuzzFeed highlighted that in a headline, making it seem like I had been on the warpath, enraged about this, convening a press conference to denounce this outrage. In fact, I was laughing about it the whole time when I said it, as the reporter noted. But all that gets washed away, and now I'm going to hear comments all day about how I'm a humorless scold who can't take a good joke, who gets furious about everything, etc. etc.”

And the social media reaction pretty much bears that out:

On why NSA spying seems to be fading from the spotlight in discussion concerning the 2016 presidential election and possible contenders, both Greenwald and Snowden talked about what would bring it back to the fore.

For Snowden, keeping the heat on was a question of civil disobedience more than one of changing the laws and making sure they’re perfectly enforced

“In such times, we'd do well to remember that at the end of the day, the law doesn't defend us; we defend the law. And when it becomes contrary to our morals, we have both the right and the responsibility to rebalance it toward just ends.”

“The problem is that the leadership of both parties, as usual, are in full agreement: they love NSA mass surveillance. So that has blocked it from receiving more debate…The division over this issue (like so many other big ones, such as crony capitalism that owns the country) is much more ‘insider v. outsider’ than ‘Dem v. GOP’. But until there are leaders of one of the two parties willing to dissent on this issue, it will be hard to make it a big political issue.”