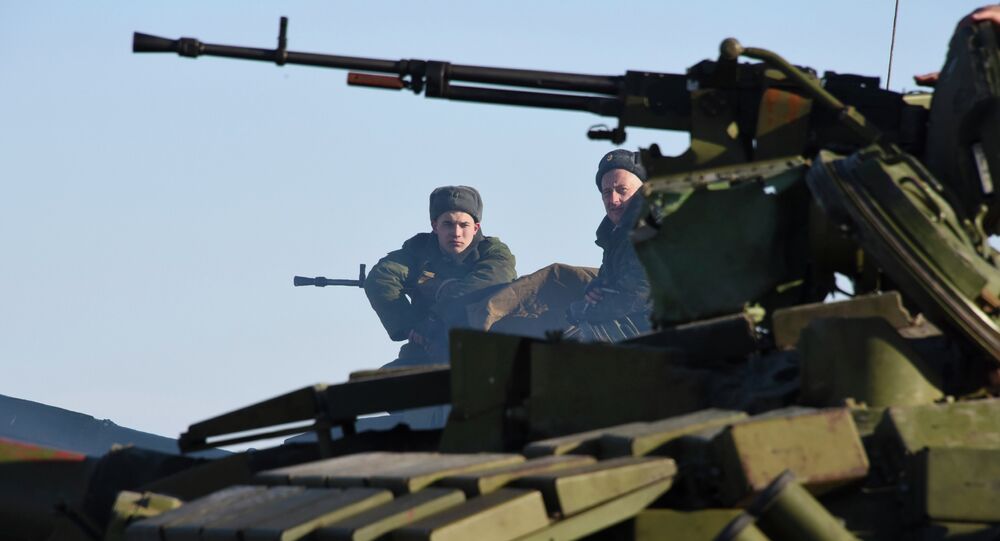 The Guardian was forced to correct an article by Eliot Higgins, a self-styled "citizen journalist", who claimed Russian military units fired on the Ukrainian Army from inside the Russian border on the basis of his jointly authored research with the Guardian's Diplomatic Editor.

© Sputnik / Mikhail Fomichev
If You Can't Make It Fake It: UK Claims Russian Missiles in Ukraine
EDINBURGH (Sputnik), Mark Hirst — The Guardian was forced to correct an article claiming Russian military units fired on the Ukrainian Army from inside the Russian border after Sputnik news agency learned the newspaper's reporter had himself jointly authored the research on which the story was based.

On Tuesday Eliot Higgins, a self-styled "citizen journalist" wrote a joint news article with the Guardian's Diplomatic Editor, Julian Borger, based on a study published by the so-called "Bellingcat investigative group". Under the headline "Russia shelled Ukrainians from within its own territory, says study" Higgins and Borger detail the claims made by the group based on "self-taught" analysis of satellite maps freely available on the internet.

Unusually, The Guardian article was reproduced by the newspaper in the English, German and Russian languages.

But Sputnik News learned Thursday that Higgins was one of the co-authors of the study on which the apparent news story was based and was in fact responsible for founding the Bellingcat group.

"Eliot Higgins is the founder of the Bellingcat investigative journalism network and lead author of the report Origins of Artillery Attacks on Ukrainian Military Positions in Eastern Ukraine Between 14 July 2014 and 8 August 2014," said the footnote added to the article Thursday.

Responding to Sputnik an official spokesman for The Guardian newspaper, who declined to be named said, "The article in question should have made clear that Eliot Higgins was lead author of the report and the founder of the Bellingcat investigative journalism network. We have now footnoted the article to reflect this and amended Eliot Higgins' byline profile."

The article had remained published online for more than two days and had attracted 1658 online comments before the changes were made.

Sputnik also learned Thursday that Higgins is a research fellow with the UK based security and intelligence organization CENTRIC, based at Sheffield University. CENTRIC's website boasts the organization has "close collaboration in security research and activity started between Sheffield Hallam University and Law Enforcement Agencies" and whose board comprises of individuals from UK policing and the British intelligence community.

Responding to questions from Sputnik, Higgins said, "If anyone has any questions about the validity of the work we produce we provide enough detail for them to check our methodology and conclusions. CENTRIC has had zero influence or involvement on the cross border artillery attack report, so any perception they did would be deeply flawed."

© Flickr / Daniel Lobo
Report on Shelling Ukraine by Russia Based on Discredited Source - Experts
Asked about the central claims made in the study that his group of unpaid "citizen journalists" had found evidence of direct Russian military attacks on the Ukrainian army when NATO and the Western powers had been unable to produce a single piece of credible evidence to support that, Higgins replied, "Maybe they have, and weren't sharing it, but I couldn't really speak on behalf of the intelligence services in that regard."

Higgins added he played no part in the editorial decision that should have made clear he was both the author of the news report and also co-author of the study on which the article was published.

When challenged directly on whether he and his Bellingcat group had any links to the well-documented CIA-front organization, the National Endowment for Democracy, Higgins said, "We've no direct links and I'm unaware of any indirect links."

One former senior CIA officer told Sputnik there were questions over how much reliance anyone could place on "intelligence" gathered purely from freely available online satellite images.

© AP Photo / Mykola Lazarenk, Pool
Conflict in Ukraine Increasing US Resolve to Arm Kiev- Former US Ambassador
"[Human sources] are something American intelligence decided wasn't necessary when the [Berlin] Wall came down. Has it changed since I left? I don't know. But ex-colleagues tell me it hasn't," Baer told Sputnik.

Baer previously told Sputnik that in intelligence terms the US and the West were "blind" in the Donbass.

In an interview with another UK newspaper, The Independent, in January 2015 Higgins admitted he had been approached to work for an undisclosed "commercial intelligence organisation", but told the newspaper he was persuaded to turn down the offer by his social media "followers" who, the newspaper reported, "persuaded him to use crowd-funding to set up Bellingcat."

Despite these facts, the Guardian article by Higgins and Borger on Russia's alleged shelling of Ukrainians was apparently taken at face value by UK diplomatic services. On Tuesday the article was retweeted by the UK Delegation to NATO, @UKNATO.

On Wednesday, the UK delegation to NATO and the UK embassy in Ukraine almost simultaneously published a slide by the UK Foreign and Commonwealth Office titled "Further proof of Russian military involvement in Ukraine" with photographs which allegedly show Russian military equipment on Ukrainian territory.

@UKNATO said tweeting the instruction by the UK Foreign & Commonwealth Office, on "How to Recognise Russia's Pantsir-S-1 (or SA-22) which is not operated by Ukrainian forces."

World concerned about #Debaltseve. #Russia must implement #Minsk & withdraw weapons such as these from #Ukraine pic.twitter.com/XkvFg6vKx3

However, the data on the pictures posted by UK Foreign and Commonwealth Office, UK delegation to NATO and UK embassy in Ukraine, regarding the time and place they were taken, does not coincide with the information on the very same photographs, published on other websites, including armamentresearch.com and Bellingcat earlier. There is also no visual proof that the equipment belongs to Russia or that the photographs were made in Ukraine.