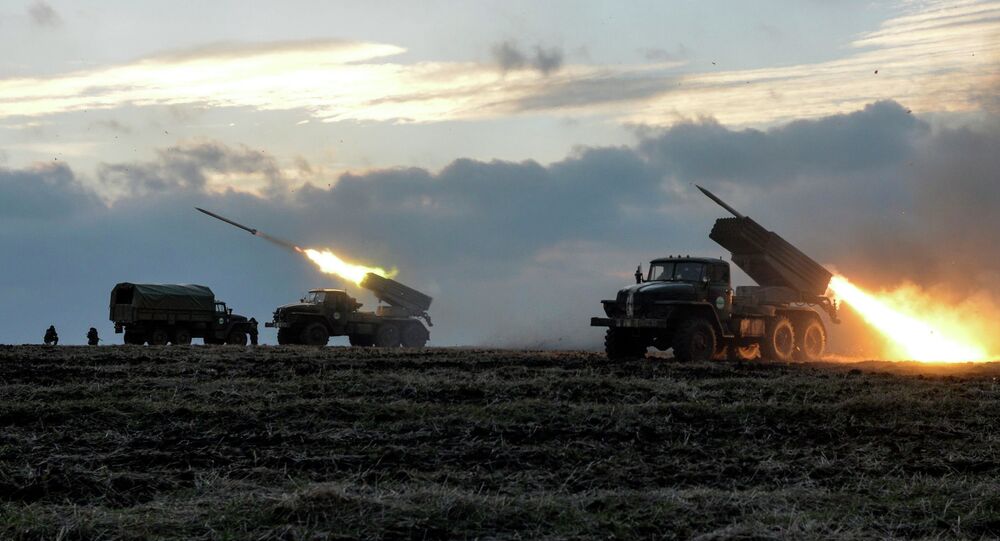 Ceasefire in Ukraine Broken: Sides Accuse Each Other of New Attacks

A few hours after the Ukrainian conflicting sides ordered to cease hostilities on the front line of contact, a shaky and long-awaited ceasefire had been violated by both parties.

© Flickr / United States Mission Geneva
Kiev to Adopt Law on Special Donbas Status Under Minsk Deal - Russian FM
DONETSK (Sputnik) — Hours after the beginning of the ceasefire between the Kiev forces and the independence supporters of Donbas, conflicting parties accuse each other of violating the truce.

"As of 02:30 [00:30 GMT] the shelling of the ATO [the Kiev-led anti-terrorist operation] forces continues. As of now, our positions have been shelled 9 times," the ATO spokesman Vladislav Seleznyov said Sunday on Facebook, adding that the positions of Kiev forces are being shelled near the villages Zolotoye, Popasnaya and Toshkovka in Luhansk region and Chernukhino and Sanzharovka in Donetsk region.

According to Seleznyov, Ukrainian troops adhere strictly to the ceasefire regime.

The leader of the self-proclaimed Donetsk People's Republic (DPR), Alexander Zakharchenko has called an emergency meeting Sunday regarding the violation of silence regime in Donbas by Kiev forces, the deputy head of DPR militia said.

"The head of the Donetsk People's Republic, Alexander Zakharchenko has called an emergency meeting at which the current situation is being discussed," Eduard Basurin said.

Despite the official beginning of a ceasefire in Donbas, Kiev forces started firing mortars and shelling the positions of the independence supporters of the self-proclaimed people's republics of Donetsk and Luhansk (DPR and LPR).

Eduard Basurin said that at 02:00 (February 14, 23:00 GMT) armed groups of Kiev militants in the town of Debaltseve have opened fire targeting the positions of LPR and DPR.

“In order to avoid civilian casualties, the units of DPR are targeting enemy’s weaponry,” Basurin said.

The independence supporters of Ukraine’s self-proclaimed Donetsk people’s republic are being forced to open fire in return to continuing shelling by Kiev forces he added.

In accordance with the new Minsk agreements, the ceasefire between Kiev forces and independence supporters of Donbas came in force at midnight, local time on February 15 (February 14, 10:00 p.m. GMT).

Earlier on Sunday, Eduard Basurin announced that at midnight all the units of the DPR militia have ceased hostilities along the contact line in Donbas.