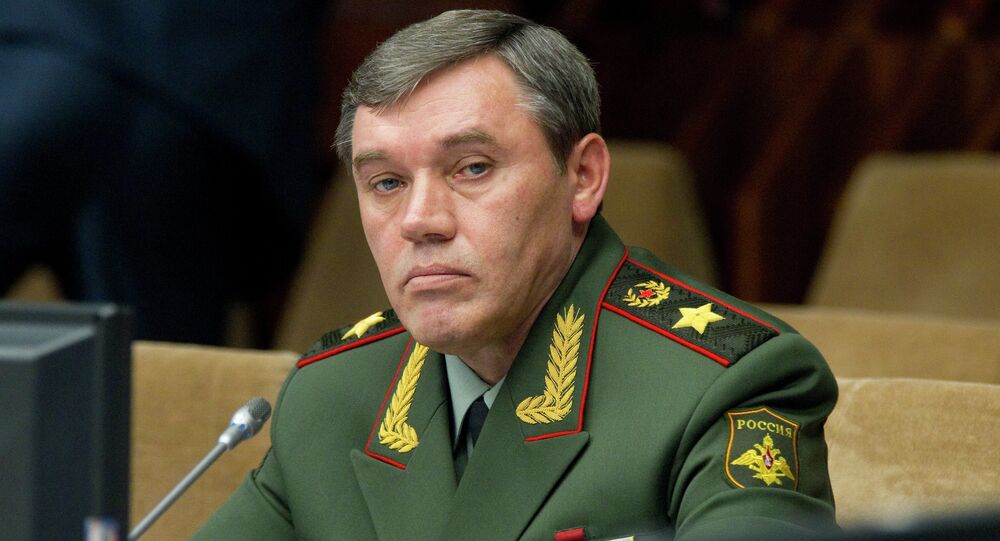 Chief of the General Staff of the Russian Armed Forces Valery Gerasimov stated that measures taken by the Russian Defense Ministry to develop the Strategic Nuclear Forces and improve regular troops' capability will not allow the US’ or NATO’s superiority over Russia.

"The Armed Forces' priority is the quality improvement of the Strategic Nuclear Forces," Gerasimov said.

The statement comes after US Deputy Secretary of Defense Robert Work's statement Thursday that the growth in Russia’s military spending and modernization over the past decade represents a challenge to the United States.

"This attitude toward keeping the Strategic Nuclear Forces in the condition of high combat readiness in combination with the quality improvement of the combat potential of the regular troops will prevent the military superiority of the United States and NATO over Russia," Gerasimov said.

"This year, four missile regiments are planned to be established and equipped with modern missile complexes within the Strategic Missile Forces," he added.

Gerasimov's statement echoes a pledge by Russian Defense Minister Sergei Shoigu, who reiterated earlier in the day that the Russian military will begin working on the task set by the president to guarantee military superiority upon completion of the state weapons program.

In late December 2014, Gerasimov said that building up Russia's nuclear forces is one of the military's key tasks for 2015.

According to latest World Bank data, Russia's military expenditures have outpaced those of the United States over the past four years, showing that US military expenses account for 3.8 percent of GDP while in Russia, it stands at 4.2 percent.

"The American anti-missile defense system has a global character and the US and its allies are increasing the elements of this system in the Asia-Pacific region," Gerasimov said.

According to Gerasimov, these actions are in breach of the Intermediate-Range Nuclear Forces Treaty (INF).

"We cannot remain indifferent to the actions of western countries and are forced to take responsive measures," Gerasimov said.

Last November, Russian Deputy Defense Ministry Anatoly Antonov stated that the US global missile defense system is intended to undermine regional and international security, and poses a serious threat to the Asia-Pacific Region.

Under NATO's planned missile defense system, radars and interceptors will be placed in phases in several NATO states. The shield will be strengthened by naval forces. In Europe, the United States plans to install an Aegis Ashore Ballistic Missile Defense system in Romania this year and a similar system in Poland by 2018.

Russia has continuously called on the international community to address the global expansion of the US anti-missile defense shield.

The Russian Armed Forces will develop a defense plan for 2016-2020 and submit it to President Vladimir Putin for approval in December, Russian General Staff chief Gen. Valery Gerasimov said Friday.

Gerasimov spoke on a variety of new challenges and threats to Russia's national security, including non-military ones. He said the West was increasingly using political and economic means to place pressure on Russia.

"This will all be taken into account while developing the Russian Ministry of Defense's plan for the period of 2016-2020, which will be submitted to the president for his confirmation in December of this year," Gerasimov said.

Gerasimov stressed the plan will focus on maintaining the country's military power, while also addressing the entire spectrum of new threats with the help of other ministries and government agencies. He cited information warfare as one of the challenges that has come to the forefront in the past year.

Russia and the West have been at odds following the February crisis in Ukraine and Crimea's reunification with Russia in March. In the past few months, the US-led military alliance NATO increased its number of air patrol missions near Russia's borders and deployed warships to the Black Sea.

No Time Line Set for Russia-NATO Communication to Move Forward