The US Secretary of Defense has reportedly asked Madrid to amend the 1988 bilateral treaty and allow permanent deployment of US troops at the Morón de la Frontera base for responding to African crises. 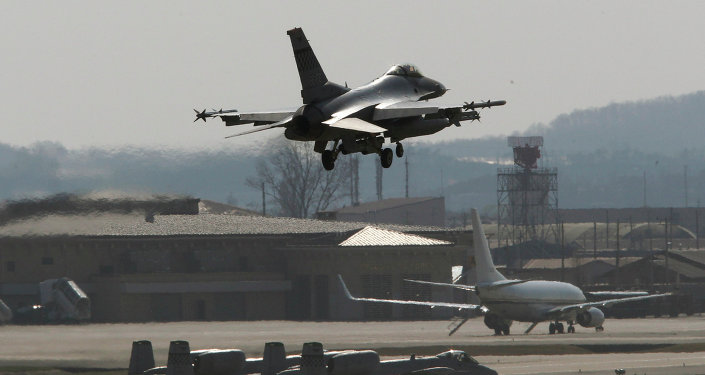 © REUTERS / Ahn Young-joon
US Air Base in South Korea Lifts Lockdown, Returns to Normal Operation
MADRID, January 5 (Sputnik) — The United States has asked Spain to grant permanent status for the deployment of US troops at the joint-use Morón Air Base in Spanish Andalusia, El Pais said Monday, citing a letter from US Secretary of Defense Chuck Hagel.

According to the newspaper, Hagel wrote a letter to Spanish authorities proposing to introduce changes to the 1988 Agreement on Defense Cooperation between the US and Spain in order to “turn Morón de la Frontera into a permanent base for responding on crises in Africa.”

In accordance with the March 2014 agreement between the two countries, 850 US troops are currently deployed at the airbase and if necessary this number can be increased to 1,110. The agreement expires in April 2015. According to El Pais, Washington wants permission to increase this number to 3,000 troops.

© Flickr / DVIDSHUB
Japan, Australia to Provide Maintenance Hubs for US F-35 Warplanes in 2018: Reports
Morón Air Base located 35 miles southeast of the city of Seville is named after a nearby town of Morón de la Frontera. The military base has been used jointly by Spanish and US Air Forces since 1953.

Spain has been an important military partner of the US. In 2011, Prime Minister José Luis Rodríguez Zapatero permitted NATO to use the Rota naval base in Cádiz as the top center for the Alliance's sea-based department of anti-missile defense. During the Ukrainian crisis, two US Navy destroyers left the base and moved to the Black Sea.

New US Military Base in Romania Due to Operate in 2015: US Navy Department

US Not Discussing New Military Base in Uzbekistan