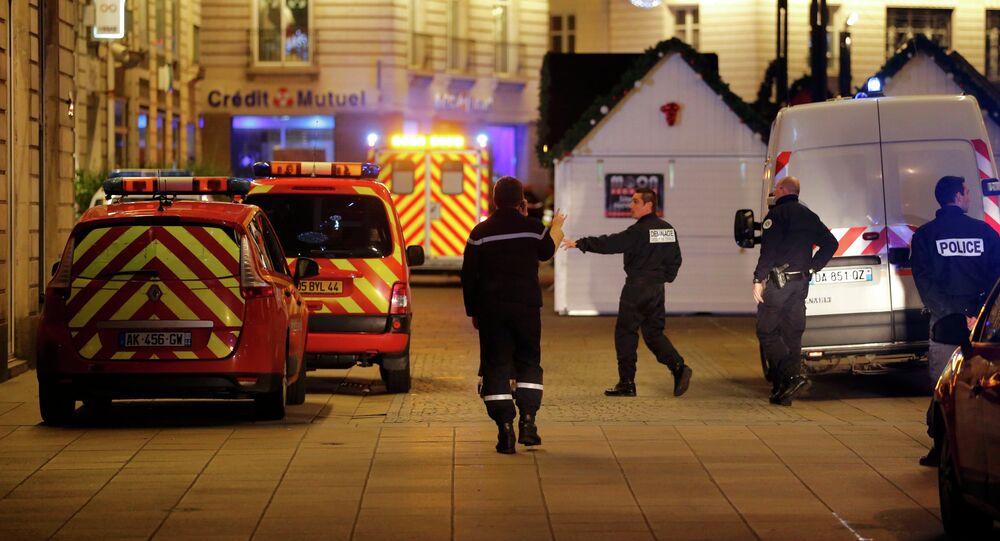 A French journalist and Middle East expert has told Sputnik that Europe should prepare for systematic attacks by Islamic State militants in the coming year.

MOSCOW, December 30 (Sputnik) — In an interview with Sputnik, well-known French journalist and Middle East intelligence services expert Jean-Michel Vernochet said that he foresees an impending Islamic State group attack on Europe in the very near future.

"You’ve probably heard about the recent events in France – in Nantes and in Dijon, in the suburbs of large cities," Vernochet recalls. "Police officers attacked by people wielding knives; cars ramming into crowds –in Nantes and in Dijon! Some people were seriously hurt. And more of these incidents keep happening."

© AP Photo
Terrorist Activity in 2014: Facts and Details
The expert notes that while "authorities are attempting to downplay [these incidents] as unrelated outbreaks," in reality "there is a connection. The perpetrators are being portrayed as unstable individuals. Let us assume that they acted on personal motives, as it makes things appear much better. Obviously they are unstable [individuals], which is why they did all these things, but there are many others who carefully consider their actions, and whose [terror] actions may be much more effective as a result."

"Therefore," Vernochet explains, "Europe cannot consider itself safe, especially considering the fact that France, together with the United Kingdom and Australia (you’ve probably heard of what happened there recently), are members of the US-led coalition of 61 states assembled to fight [IS]."

Worst of all, in the journalist's view, is the fact that the Islamic State is "a movement created and supported by the United States," which "may at first seem paradoxical." Vernochet likened what he viewed as simultaneous US support for and campaign against IS as being akin to "a brake next to a gas pedal in a race car. On the one hand, the movement is being supported, and on the other, it is being opposed and contained." Vernochet marked this apparent paradox down to geopolitical interests.

Vernochet believes that in today's interconnected world there is no point in using "concepts of global or local wars…[as] both of these concepts are intertwined." The journalist cited the presence of Islamic militants from across the world participating in the conflict in Mesopotamia and the Levant. "Those who believe that only local activists participate in regional conflicts should be reminded of Chechen fighters in Syria and Iraq. Another example is the stream of Uygur militants coming from China," the expert explained.

© Sputnik / Andrey Stenin
Islamic State Emissaries Sighted Near Russian Borders: Foreign Minister
In this connection, Vernochet notes that even those countries, like China, that seek to distance themselves from the conflicts in the Middle East, cannot do so. He believes that "with the help of the Shanghai Cooperation Organization, [China] seeks to reinforce the Russia-China defense bloc that may eventually be joined by India." As far as India is concerned, Vernochet explains that there are 400 million Muslims in India, and that "back in the 19th century certain Indian sects [had] already swore fealty to Wahhabi movements that became widespread in Punjab and in Peshawar." The "real situation is quite different from what we [in the West] think it is, as things are moving to a global level," the journalist says.

In his recent book "Les Egares: Le Wahhabisme est-il un contre Islam?" ("The Perplexed: Is Wahhabism One Against Islam?") Vernochet provides what he says is "a comprehensive description of the world of Muslim sects that are intertwined with US intelligence, which [have] turned Saudi Arabia into an instrument of war." Vernochet notes that "Sunni Islam [was] always inspired by the example of the Ottoman Empire as the embodiment of ummah – "the Islamic world". During the First World War the West created a monster [in the Middle East] that somewhat resembles the European Protestant sects of the 17th century. The Protestant sects gave birth to America, and the Sufi sects gave birth to the terrorist state that is now so dear to Washington."

© REUTERS / Thaier Al-Sudani
Iranian Lawmaker Says Tehran Contributed to Fighting Terrorism in Iraq
Vernochet believes that "this state has infected the whole of the Middle East, becoming the reason for the confrontation between Palestine and Israel (which is also supported by the United States), for the destruction of Iraq, Libya, Lebanon, Syria and Mali, the tragedies at Northern Caucasus… The list goes on and on."

Most controversially of all, Vernochet notes that "now, having cleared some space, the US, together with Saudi Arabia, is building an entire army poised to attack Europe. This is an experienced army that has no qualms about chopping off heads… Its warriors have been fighting since their teens and they have already lost everything…. Alas, poor West!"