The United Nations Support Mission in Libya has urged all sides of the military conflict in the country to work towards the de-escalation of the crisis and condemned airstrikes which have been carried out by the country's government forces against militants based in Misrata on Sunday. 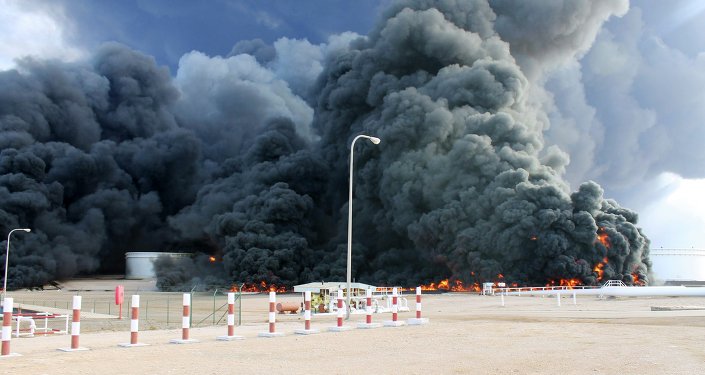 © REUTERS / Stringer
Flames Engulf Fifth Oil Tank at Libya’s Largest Port After Rocket Attack
MOSCOW, December 28 (Sputnik) — The United Nations Support Mission in Libya (UNSMIL) condemned the airstrikes carried out by the country's government forces in the northwestern city of Misrata on Sunday, warning that an escalation in violence could lead to a full-fledged war.

“UNSMIL appeals to all sides to work towards de-escalation, and calls on them to take the courageous steps to stop this cycle of violence which, if it continued, will lead the country to chaos and all-out war,” the mission said in a statement, published on the organization’s official website.

According to the UN, the attacks were conducted against militants based in Misrata. The airstrikes come in light of the recent attack on Libya’s largest oil depot by the Libya Dawn militia. Unidentified gunmen also killed at least 20 soldiers guarding oil storage tanks.

Recent clashes between government forces and insurgents have also taken place in the Nafusa Mountains in Libya's northwestern regions, leaving some 170 people dead, while fighting in the eastern city of Benghazi has left 450 dead, the UN said.

According to the United Nations, the fighting is causing a humanitarian crisis. At least 120,000 people have already been forced to flee their homes.

A conflict has raged in the oil-rich North African country, following the ousting of long-time leader Muammar Gaddafi during the 2011 Arab Spring. Forces loyal to Libya’s government and rival militias have been fighting for control of the country and its oil resources.

UN Urges All Sides in Libyan Conflict to Cease Fighting