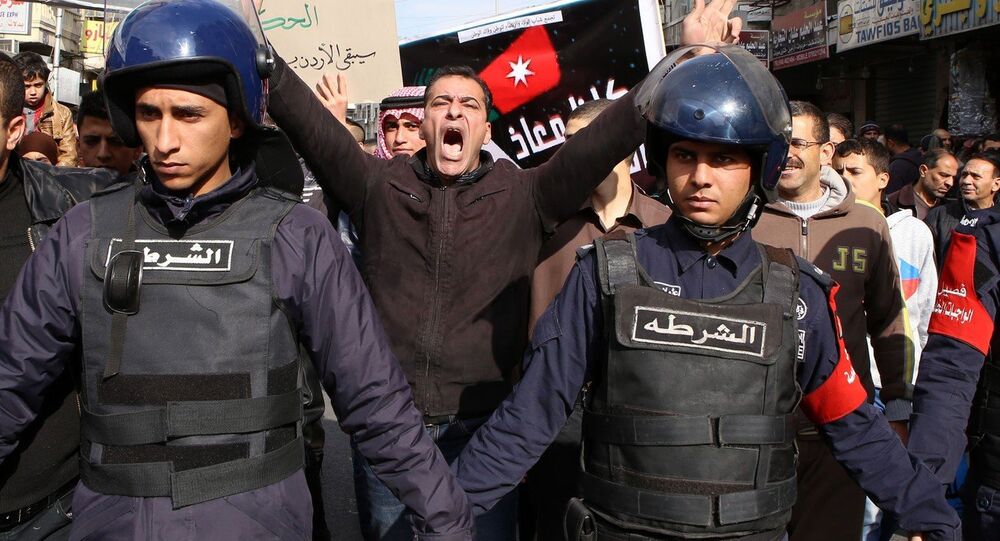 Jordan in Secret Talks to Secure Release of Pilot Captured by IS: Reports

Jordanian authorities have begun indirect negotiations with the Islamic State to settle the release of a Jordanian Air Force pilot with high-level political figures in Iraq and tribal leaders as intermediaries.

© AP Photo / Raqqa Media Center of the Islamic State group
Jordanian Government Pledges to Secure Release of Pilot Captured by IS
MOSCOW, December 26 (Sputnik) — Jordanian authorities have begun indirect negotiations with the Islamic State (IS) to secure the release of a Jordanian Air Force pilot, whose plane crashed near the IS stronghold of Raqqah, Syria, Al Jazeera reported, citing government sources.

"Indirect negotiations are under way… We are ready to begin settling the [pilot's release]," the source was quoted as saying.

According to the broadcast network, Jordanian authorities are in close contact with high-level political figures in Iraq and tribal leaders that enjoy "strong relations" with Jordan, who could potentially serve as intermediaries. Additionally, Turkey and Qatar could also potentially fill that role.

"Contact is under way with our Turkish [colleagues]. We will also send [requests] to establish contact with [colleagues] in Qatar," the source was quoted as saying by the network, adding that Jordan is considering a prisoner exchange of IS fighters held in Jordan for its pilot, 26-year-old Maaz Kassasbeh.

The Jordanian military confirmed on Wednesday reports that Kassasbeh had been captured by militants near Raqqah after one of its F-16 jets had crashed during an anti-IS air campaign. The US Central Command (CENTCOM) and the Jordanian Armed Forces later announced that, contrary to claims by the militant group, evidence indicated that IS did not shoot down the aircraft.

Kassasbeh's family appealed for his release and the army urged media outlets to exercise restraint in publishing information and "take into account the feelings of the pilot's relatives."

In June 2014, the Islamic State jihadist group declared a caliphate in swaths of Iraqi and Syrian territories under its control, prompting the United States to build a 60-nation strong anti-IS coalition directly or indirectly involved in airstrikes targeting the militant group's strongholds.