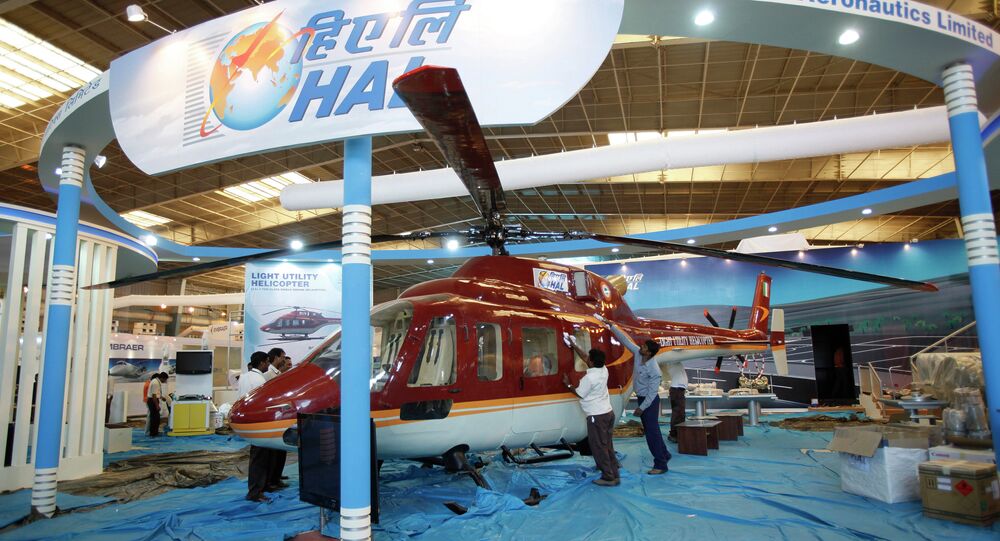 India's state-owned aerospace and defense giant Hindustan Aeronautics Limited (HAL) with some private companies will be partners in the Russia-India helicopter deal from the Indian side, according to the spokesperson for the Russian Embassy in India.

© Sputnik / Michael Klimentyev
Russian-Indian Relations in Facts and Details
NEW DELHI, December 22 (Sputnik) — India's state-owned aerospace and defense giant Hindustan Aeronautics Limited (HAL) will be one of the major partners in the Russia-India helicopter deal, the spokesperson for the Russian Embassy in India told Sputnik Monday.

"India has told us that the one major partner will be Hindustan Aeronautics Limited (HAL). But there will be some other private partners also as indicated by Indian side," the Senior Counselor of the Russian Embassy in India, Sergey Karmalito said, adding that the related documents would be signed with the HAL "soon."

"HAL has fairly good experience of manufacturing so it will be a good start," Karmalito added.

© REUTERS / Shailesh Andrade
Russian-Indian Joint Military Projects to Boost Delhi's Defense Industry
An agreement to assemble 400 Russian Mi-17 and Kamov-226T helicopters per year in India with the possibility of exporting them to third party countries was agreed in principle at a meeting between Russian President Vladimir Putin and Indian Prime Minister Narendra Modi, during Putin's December visit to New Delhi.

Earlier on Monday Indian newspaper The Hindu reported, citing unnamed officials from the Russian Embassy, that Russia and India are now discussing the details of the agreement.

Founded in 1940 and managed by the Indian Ministry of Defense, Hindustan Aeronautics Limited designs and assembles helicopters, aircraft, jet engines and their spare parts.