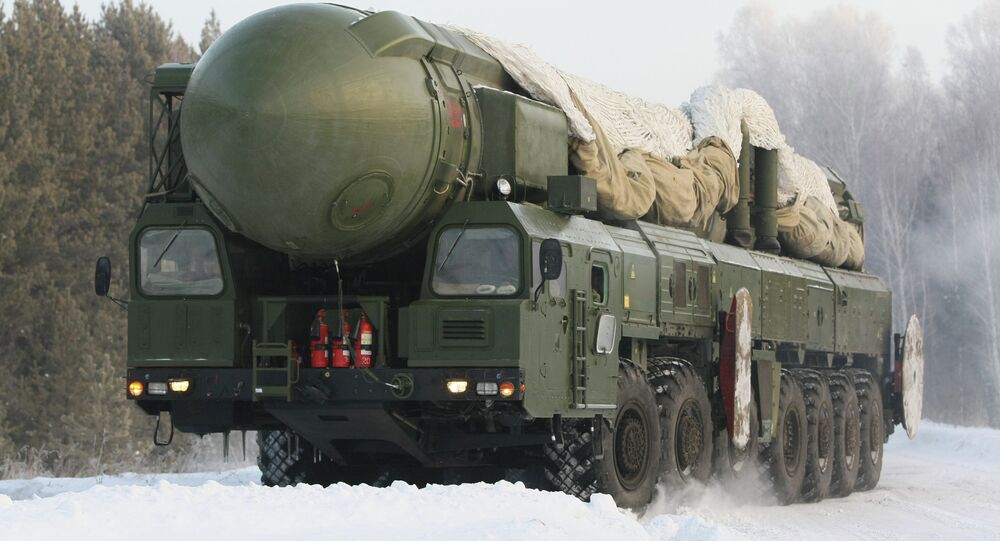 “There are no plans to deploy military SMF units in the Crimean Federal District as there is no need. Today’s long-range ballistic missiles can strike any target anywhere in the world without bringing them to the borders of Russia,” Karakayev said.

He said that these type of missiles are located deep within Russian territory and are capable of protecting Russia from enemy attacks.

In September remarks following the deployment of several Sukhoi Su-30 fighter jets to a Sevastopol air base, Russian Defense Minister Sergei Shoigu said that the escalating crisis in neighboring Ukraine and the increased military presence of NATO troops at Russia's borders required boosting the peninsula's defenses.

Ukraine's former republic of Crimea joined Russia in March after over 90 percent of its population voted to leave Ukraine for Russia following a coup in Kiev and the rise of nationalist sentiment in the former Soviet nation.

Crimea served as a crucial Black Sea naval base during the Soviet era, also housing a fleet of nuclear submarines. The submarine base was abandoned in 1993, soon after the Soviet Union fell apart. Today, the Crimean city of Sevastopol is headquarters to Russia's Black Sea Fleet.

Following Crimea's reunification with Russia, NATO intensified air patrols in the Baltic region and sent additional warships to the Black Sea. Moscow has criticized the bloc's growing military presence with Russian President Vladimir Putin claiming that the Ukrainian crisis was used by NATO as a pretext for "resuscitating" itself.

“We have no doubts that the new heavy liquid-fuel missile will be created by the end of this decade,” Karakayev said.

The SFM commander said last year that the Russian military would receive the new missile systems to replace the current Satans between 2018 and 2020.

The SS-18 ICBMs, introduced in 1975, were the first Soviet-made multiple independently targetable reentry vehicle (MIRV) missiles. The SS-18 is silo-housed and highly accurate, and is believed to pose a serious threat to US land based strategic missiles systems. It is currently the world’s most powerful nuclear missile.

In December 2013, the SMF chief said that the new Sarmat is expected to feature advanced countermeasures, such as a complex command and control systems and a high degree of maneuverability, enabling it to penetrate missile defense systems.

“The [railroad-based missile launcher] Barguzin complex will considerably surpass its predecessor in precision and range, as well as in other characteristics that will allow this complex to be on duty in the Strategic Missile Forces well into the future, at least until 2040,” Karakayev said.

“Work is continuing on creating the railroad-based missile complex Barguzin and is being accomplished under the strict observation of demands of the confirmed timeline,” Karakayev said.

In April, a Russian technology institute rolled out an R&D project to develop a new rail-mobile intercontinental ballistic missile (ICBM), with the first prototype to be completed in 2020. The weapon's mobility makes it difficult to track, thus complicating a preemptive strike.

Karakayev said that the revamped military railroad system would considerably surpass its Soviet-era predecessors in precision and range, among other characteristics.

"The [railroad-based missile launcher] Barguzin complex will considerably surpass its predecessor in precision and range, as well as in other characteristics that will allow this complex to be on duty in the Strategic Missile Forces well into the future, at least until 2040," Karakayev said.

The original Soviet rail-mobile system included 104 ton RT-23 Molodets (SS-24 Scalpel) missiles which, requiring three locomotives to transport, was so heavy it damaged railroad tracks. The new mobile-based complex will be half the weight of the decommissioned Soviet rail-based missile system, allowing it to fit into one railcar, according to Deputy Defense Minister Yuri Borisov.

Russia plans to create a Missile Forces group that will include all three types of missile delivery systems including silo-, ground- and railroad-based missiles, Karakayev added.

"A group of rocket complexes in three types will be created in the Missile Forces that showed high effectiveness in the Soviet years: silo, ground and railroad," he said.

The first rail-based long-range missile was deployed by the Soviet military in 1987. The weapon was dismantled 20 years later, under the START II arms reduction treaty with the United States. However, the treaty's successor START III, which was agreed on in 2010, does not prohibit development of rail-mobile ICBMs.

“A group of rocket complexes in three types will be created in the Missile Forces that showed high effectiveness in the Soviet years: silo, ground and railroad,” Karakayev said during a briefing.

“Twenty-four new Yars mobile and stationary intercontinental ballistic missile systems will be employed in the forces,” Karakayev said in regards to the military plans in 2015.

The fifth-generation RS-24 Yars (SS-29) is an upgraded version of the Topol-M ballistic missile first tested in 2007. It was put into service in July 2010.

The RS-24 can carry multiple independently targetable nuclear warheads, designed to be able to perform maneuvers to evade missile defense systems up to a range of 7,500 miles.

The Strategic Missile Forces also plans to put a number of its units across Russia on alert, equipping them with RS-24 Yars ICBMs in 2015.

Russia to Carry Out 14 Ballistic Missle Test Launches in 2015: Commander

“There are 14 launches planned for 2015 to examine the flight testing of future models of arms, as well as for the control of the technical readiness of the missile complexes already in service,” Karakayev said.

He added that there will be two more test launches that are scheduled to occur before the end of 2014.

In early November, another nuclear submarine test-fired a Sineva SLBM in the Barents Sea off the northern coast of Russia.