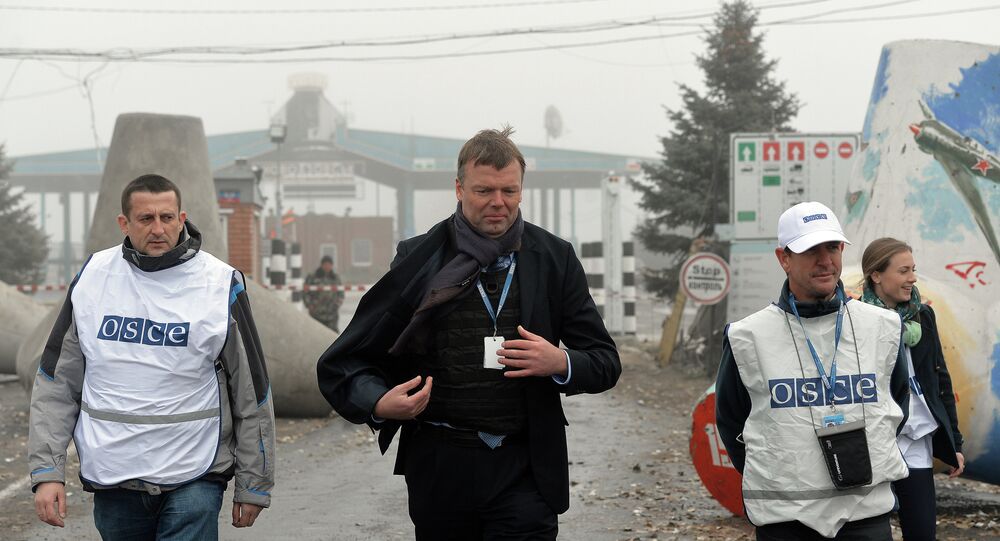 "We know that a campaign has recently been launched in Ukraine against the [OSCE] mission. It [the mission] is accused of working for Russia; they cite completely ridiculous figures; they write in the media that 80 percent of it [the mission's staff] are Russians, even intelligence workers. This is nonsense," Kelin stated Monday in an interview with the Rossiya-24 TV channel.

Kelin said only 19 of the total number of the mission's observers, which is 272, are from Russia. Several of the 19 observers are in eastern Ukraine. According to Kelin, Russia announced plans to augment this number by another 19, though he noted not many opportunities are in place in order to do so.

During his interview, Kelin also touched upon the recent decision of Ukraine's President Petro Poroshenko to cancel state services in Donbas, eastern Ukraine.

"There is a necessity for more political settlement, but what do we receive from the Minsk agreements in place of that? Kiev refuses special rights to autonomy, special rights for the east [eastern Ukraine]; that question is practically off the agenda. So is the bill on amnesty, which has been withdrawn. What refers to the last point in the Minsk agreements – a huge program on the rehabilitation of Donbas – is not being considered. To the contrary, Poroshenko's decree practically isolates Donbas from the rest of Ukraine from an economic perspective," Kelin said.

Kelin also said that the possibility of a large-scale attack by Kiev on Donbas looms large.

"We hear the statement of the defense minister of Ukraine that preparations are currently underway for a war during winter. Likewise, Ukraine's President's adviser [Yuriy] Lutsenko has stated that four factories producing armored tanks are intensively working on three shifts and are sending equipment to the east. Essentially, if you put together these statements and the ongoing movement of equipment by the Ukrainian side, it is easy to imagine that preparation for a major offensive is possibly underway. This cannot be ruled out," Kelin said to the Rossiya-24 TV channel.

Following a coup in February, which resulted in the president of Ukraine Viktor Yanukovych toppling, the new government mounted a military operation against the people in Ukraine's southeast, who refused to recognize the coup-placed authorities.

To help put an end to the hostilities in eastern Ukraine, a trilateral Contact Group on the conflict was established. The group comprising representatives from Ukraine, the OSCE and Russia held a meeting on September 5 in Minsk, Belarus, for a ceasefire to be agreed on. Despite the truce being announced, the militia and government forces in Ukraine have been accusing each other of violating the agreement.