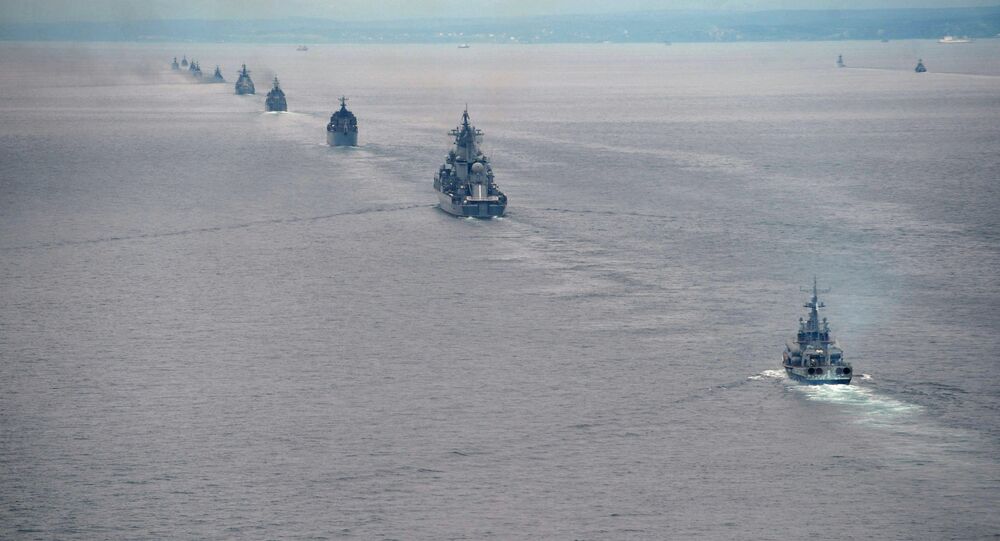 The Australian Department of Defense has confirmed it is monitoring Russian naval vessels that are currently transiting through international waters to the north of Australia ahead of the G20 Summit in Brisbane.

MOSCOW, November 13 (RIA Novosti) – The Australian Defense Force has confirmed it is monitoring Russian warships off its coast, which were sent to the country ahead of the G20 Summit in Brisbane.

“The movement of these vessels is entirely consistent with provisions under international law for military vessels to exercise freedom of navigation in international waters,” reads a statement on the official website of the Department.

“Russian naval vessels have previously been deployed in conjunction with major international summits, such as the APEC meeting in Singapore in 2009. A warship from Russia’s Pacific Fleet also accompanied former Russian President Medvedev’s visit to San Francisco in 2010. Questions regarding the vessels should be directed to Russian authorities,” it continued.

“Guided missile cruiser Varyag — named after the country’s Viking ancestors, the Varangian people, is leading the contingent south in international waters”, according to The Australian. “It is accompanied by destroyer Marshal Shaposhnikov, and one of the world’s most powerful tugs, the Fotiy Krylov. Supply tanker Boris Butoma is also heading south towards Australia’s east coast as part of the dispatch.” Commissioned in 1989, the Ukrainian-built Varyag was originally known as the Chervona Ukraina, or ‘Red Ukraine’.

“It’s not unusual for the Russians to deploy in the vicinity of a major international conference,” the newspaper quoted the country’s Prime Minister Tony Abbott as saying in Burma on Thursday.

“So it’s not really surprising and we are doing what you’d expect us to do — we are carefully monitoring the movements of these ships when they are in Australia’s approaches,” he said, adding “warships have freedom of the seas”.

Australian Foreign Minister Julie Bishop also commented on the Russian vessels’ deployment, saying that “Russia is doing what navies do”.

More Than Half of G20 Policies Inefficient for Working People: ITUC