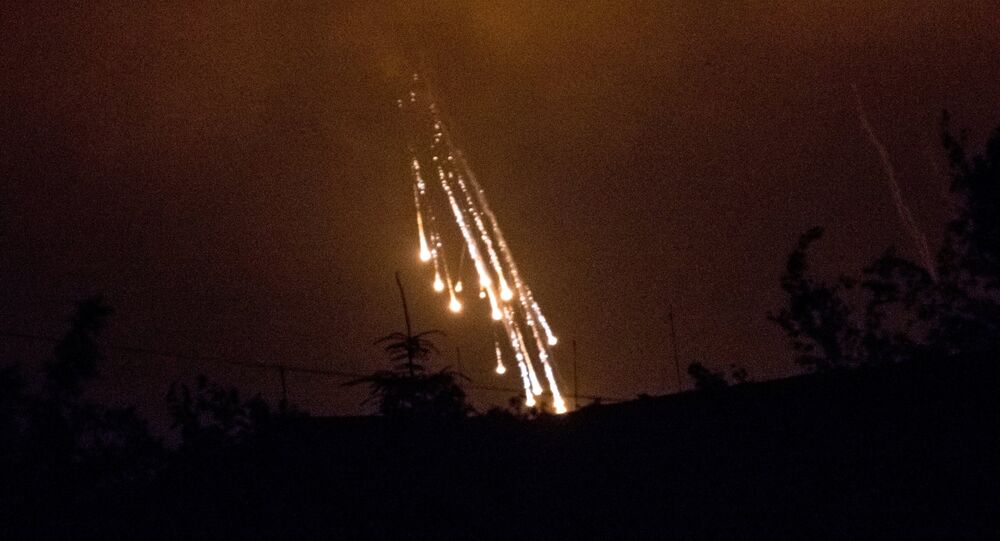 In the report released with Harvard Law School's International Human Rights Clinic Human Rights Watch said that stronger law is needed to decrease or prohibit the use of incendiary weapons.

MOSCOW, November 11 (RIA Novosti) – Human Rights Watch called on Tuesday for stricter law aimed to regulate the use of incendiary weapons following the attacks in Ukraine and Syria.

"Incendiary weapons have produced severe and unacceptable human suffering, most recently in Syria and Ukraine. Stronger law is needed to decrease or prohibit the use of incendiary weapons, including those with white phosphorus, and reduce the associated civilian harm," HRW said in the report released with Harvard Law School's International Human Rights Clinic.

According to the report, in August 2014, incendiary weapons were used in attacks on two Ukrainian towns, Ilovaisk and Luhanskoe. HRW was unable to confirm who was responsible for the attacks.

Human Rights Watch and the Harvard clinic called for the parties to the Convention on Conventional Weapons (CCW) to "condemn the use of incendiary weapons, express support for reviewing CCW Protocol III on incendiary weapons, and work toward developing stronger protections for civilians."

According to the UN, 118 countries ratified or acceded to the convention, including all five permanent members of the UN Security Council, China, France, Russia, the United Kingdom and the United States, and as well as Ukraine. Syria is not party to the convention.

Incendiary weapons burn at a very high temperature making victims feel excruciating pain. Many victims, affected by the weapons, suffer and die of lethal painful thermal and respiratory burns, which are slow to heal and difficult to treat.

Islamic State Obtaining US Weapons Due to Lack of US-Syria Cooperation: Moscow

Russian Diplomat: Not All Heavy Weaponry Withdrawn From Line of Contact in East Ukraine