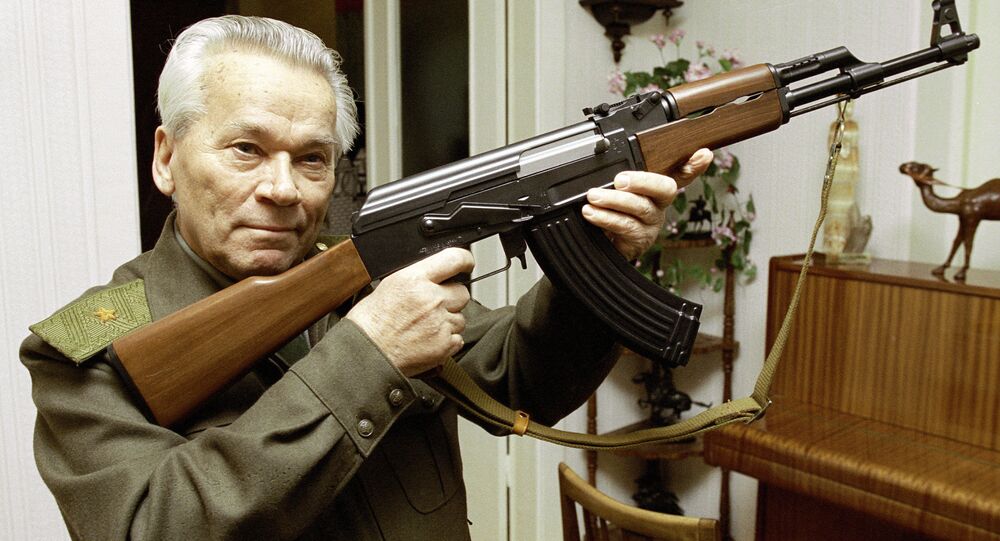 On November 10 the legendary AK-47 designer Mikhail Kalashnikov would celebrate his 95th birthday.

MOSCOW, November 10 (Sputnik) — Mikhail Kalashnikov, the legendary Soviet and Russian small arms and light weapons designer, was born on November 10, 1919 in the village of Kurya, Altai Territory. His father and mother were farmers from Kuban.

In 1930, Timofei Kalashnikov's kulak (wealthy farmer) family was deported from Altai Territory to the town of Nizhnyaya Mokhovaya in the Tomsk region.

In 1936, Mikhail completed the ninth grade and returned to Kurya, where he began work at a machine-tractor station, and then served as an apprentice at a maintenance depot of Matai station on the Turkestan-Siberian Railway (now in Kazakhstan).

In 1938, Mikhail Kalashnikov was drafted into the Red Army where he completed a tank operator training course and served in the Kiev Special Military District. During his stint there, Kalashnikov came up with his first inventions. He designed an inertial counter for the number of rounds fired from a tank gun, built a special device for the TT pistol to make it easier to shoot through grooves in the tank turret, and developed a device to gauge the service life of a tank engine.

In June 1941, Kalashnikov was sent to Leningrad (now St. Petersburg) to put his inventions into production.

Mikhail Kalashnikov joined the Great Patriotic War (1941-45) in August 1941 as a tank commander. In October 1941, he was wounded in combat in the Battle of Bryansk. During a six-moth recovery period, Senior Sergeant Kalashnikov designed his first submachine gun. A prototype model was built at the Matai railway depot.

In July 1942, Kalashnikov was assigned to the Central Research and Test Range for Small Arms, Light Weapons and Mortars of the Moscow Military District, where his submachine gun completed a series of tests, but was not adopted for service because of high production costs and certain design shortfalls. By 1944, in addition to the submachine gun, Mikhail Kalashnikov had designed a light machine gun and a semi-automatic carbine, but they were not put into service either.

Due to its successful track record, in early 1949, the AK-47 became a standard issue assault rifle, and went into series production at the Izhevsk Machine Manufacturing Plant. The rifle was officially known as the "1947 series Kalashnikov 7.62 mm automatic rifle (AK)." In 1949, Kalashnikov was awarded the Order of the Red Star and the Stalin Prize "for new weapon design." Starting in 1949, Mikhail Kalashnikov worked in the chief designer's office at the Izhevsk plant.

In February 2012, following the reorganization of the Izhevsk plant, Kalashnikov was appointed chief designer at the Izhmash Science and Production Association and head of the Design Bureau for Small Arms and Light Weapons.

In total, the Kalashnikov Design Bureau developed over 100 weapon models.

In the early 1970s, Kalashnikov designed the Saiga semi-automatic rifle, based on the AK.

In 1971, he was awarded the degree of Doctor of Technical Sciences. During the last decade of his life, Kalashnikov represented the achievements of Russian military designers at arms exhibitions at home and abroad.

Lt. Gen. Mikhail Kalashnikov was twice named Hero of Socialist Labor, and was awarded the Stalin and Lenin Prizes. In 2009, Russian President Dmitry Medvedev conferred on Kalashnikov, who was 90 at the time, the title of Hero of Russia.

On December 23, 2013, Mikhail Kalashnikov died in Izhevsk. He was buried at a federal military cemetery in the Moscow region.

Kalashnikov on Sanctions: US Ordered Three Times Annual of Company's Products in Advance