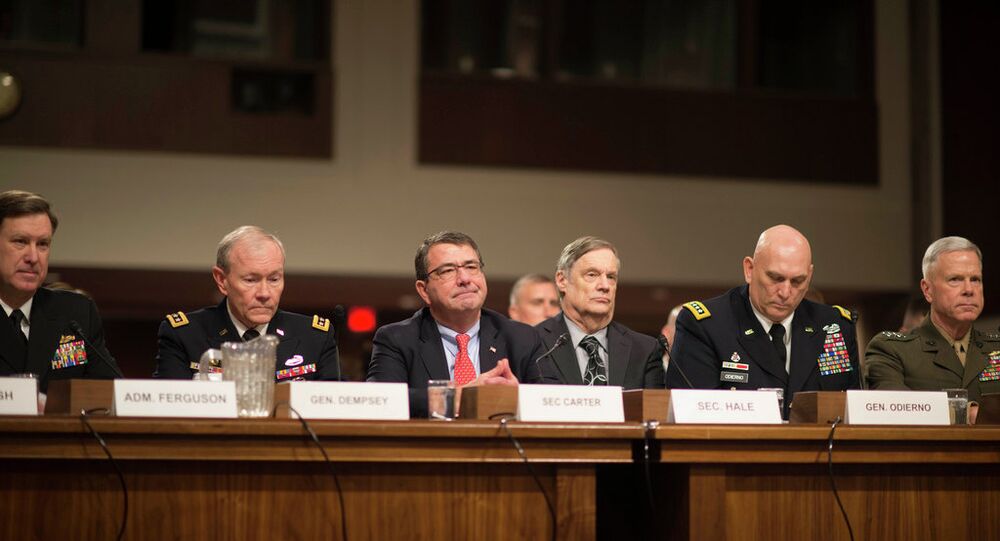 The US military is bracing for a looming wave of across-the-board budget cuts known as the “sequestration” that Pentagon officials say would dangerously erode the United States’ defenses.

WASHINGTON, February 20 (By Carl Schreck for RIA Novosti) – The US military is bracing for a looming wave of across-the-board budget cuts known as the “sequestration” that Pentagon officials say would dangerously erode the United States’ defenses.

“Sequestration will put us on a path toward a hollow force and inflict serious damage on our national security,” outgoing US Defense Secretary Leon Panetta wrote in a letter informing Congress on Wednesday that the Pentagon will place its civilian workforce on administrative leave if the budget cuts are not averted.

The automatic sequestration cuts were established by US lawmakers in 2011 as a sort of budgetary guillotine set to fall on the entire federal government should Congress fail to implement more than $1 trillion in fiscal cuts.

But with no deal in sight as the March 1 deadline approaches, the Pentagon is staring at a possible $500 billion in cuts across the entire US Defense Department over the next decade should Congress and US President Barack Obama fail to reach a budget deal.

Lawmakers and top US military brass have been sounding the alarm in recent weeks about the dangerous impact the cuts could have on the combat-readiness of US troops and the nation’s image in the eyes of friends and foes.

“The world is watching us,” Deputy Defense Secretary Ashton Carter said in testimony to the US Senate’s appropriations committee last week. “Our friends and our enemies are watching us ... and they need to know that we have the political will to forestall sequestration.”

The heads of the four branches of the US military told the Senate Armed Services Committee last week that sequestration would result in a significant loss of military personnel, a dearth funding for training, and degraded arms and equipment.

The US army alone would see its ranks shrink by 100,000 soldiers next year due to the budget cuts, Army Chief of Staff Gen. Ray Odierno said in his testimony to the committee.

US Marine Corps Commandant Gen. James Amos told the committee that US forces’ “qualitative combat edge will be severely eroded by the impacts of sequestration, leaving America’s men and women with inadequate training, degraded equipment, and reduced survivability.”

Obama has used his executive power to insulate military personnel from the cuts, though Panetta informed the Defense Department’s 800,000 civilian employees in a memo Wednesday that they would be furloughed should the March 1 deadline pass with no deal.

“In the event of sequestration we will do everything we can to be able to continue to perform our core mission of providing for the security of the United States, but there is no mistaking that the rigid nature of the cuts forced upon this department, and their scale, will result in a serious erosion of readiness across the force,” Panetta wrote in the memo.

Defense budget expert Michael O’Hanlon of the Brookings Institution, a Washington-based policy think tank, told RIA Novosti on Wednesday that some of these officials’ dire warnings are “dramatizations.”

“For example, our force will not become hollow and we will not fall from superpower status and capability,” O’Hanlon said, though he added that the cuts are “at best hugely disruptive and a hugely inefficient policy.”

The cuts would indeed “affect readiness”—primarily in training and maintenance—but their greatest impact may not be directly linked to the battlefield, O’Hanlon said.

“I believe it will be the insidious effects—convincing many civilian employees that the government is not a reliable employer, slowing down many weapons contracts in ways that make purchases more expensive over time, wasting a year as policymakers focus on a manufactured crisis rather than real substantive issues,” he said.

The United States spent $718 billion on defense and international security assistance—or 20 percent of its budget—in 2011, according to the Center on Budget and Policy Priorities, and some defense budget analysts say reining in the Pentagon’s funding would be prudent fiscal policy and could be done without harming national security.

A recent report by the Center for International Policy, a liberal-leaning Washington-based think tank, concluded that claims of military job losses due to the sequestration are “grossly distorted,” that military contractors already have considerable backlogs of military orders to keep their businesses rolling; and that the impact on the economy would be limited to a few specific geographic pockets.

“Despite claims made by defense contractor-funded reports, the Pentagon is not a jobs program,” the report’s co-author, William Hartung, told The Fiscal Times. “Pentagon spending is a drag on the economy, not a spur to economic growth.”

Others say that slashing US defense spending is sound policy, but not through across-the-board cuts mandated by sequestration.

“Reductions of $500 billion in defense spending over the next decade would not hurt our national security if they are intelligently applied,” former Pentagon official Lawrence Korb and Max Hoffman of the Center for American Progress wrote in a recent essay for CNN. “After more than a decade of war, it is time to get real about reducing defense spending.”c