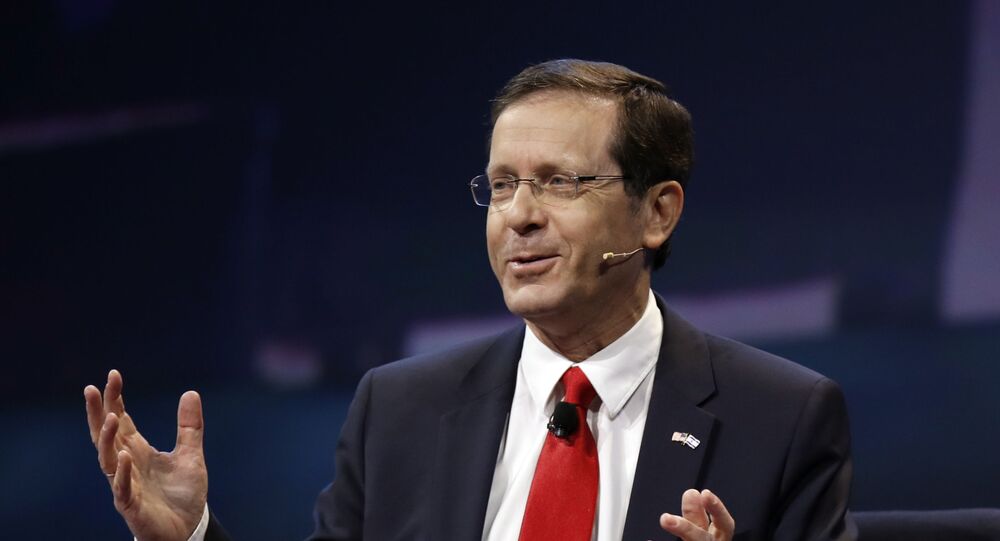 Boycotts Against Israel Are a 'New Form of Terrorism', Says Country’s President

The statement comes three days after the US company Ben & Jerry’s, which produces ice cream, frozen yogurt, and sorbet, announced that it would stop selling its products in the West Bank, which it described as “occupied Palestinian territory”. The move sparked anger and indignation in Israel as well as in the United States.

Boycotts against Israel are a "new form of terrorism", said the country's President Isaac Herzog. Speaking at a memorial event for late former Prime Minister Yitzhak Shamir, Herzog weighed in on the recent move by Ben & Jerry’s, saying its aim is to "harm Israeli citizens and the Israeli economy".

"We must oppose this boycott and terrorism of any kind", the politician said.

His comments were dismissed by the Palestinian Authority (PA), which said that "the occupation is terrorism itself".

"The Israeli president should thank Ben & Jerry's. They're an alarm bell. Either Israel wakes up from its occupation and works to end it, or it will face a total boycott", read a statement issued by the PA’s Foreign Ministry.

Herzog’s statement has also been criticised by Israeli lawmakers. Yair Golan, former deputy chief of the General Staff of the Israel Defence Forces and current member of the left-wing Meretz party, posted the following statement on Twitter.

"As someone who knows terrorism and has been fighting terrorism all his life, what is happening in the international arena is not terrorism. We must fight against the boycott with one hand, and for a two-state solution with the other. But using concepts drawn from the world of violence is not the way. An ice cream boycott is not terrorism".

Inconsistent With Our Values

Earlier this week, Ben & Jerry’s announced that it would stop selling its ice cream in the West Bank, saying it would be inconsistent with the company’s values to sell its products in "occupied Palestinian territory". At the same time, Ben & Jerry’s said its products will be available within Israel.

The move caused uproar in the country, with Foreign Minister Yair Lapid describing it as a "shameful surrender to antisemitism and to all that is wrong with the anti-Israel and anti-Jewish discourse". The decision also caused indignation in the United States, a key ally of Israel.

Texas Comptroller Glenn Hegar said the company may be blacklisted in the Lone Star State if it turns out that it violated Chapter 808 of the Texas Government Code, which forbids the state from giving contracts to firms that boycott Israel.

"Texans have made it very clear that they stand with Israel and its people. We are against all those wishing to undermine Israel’s economy and its people", Hegar told local media.

This is not the first time that the company has taken a stance on political issues. In 2017, it stopped serving two scoops of the same ice cream flavour in Australia due to the country’s government's refusal to recognise same-sex marriages. In 2020, Ben & Jerry’s joined multiple US companies in boycotting paid advertising on Facebook and its affiliates, calling on the social media giant to deal with racist and hateful content that appears on the platforms.

The Israeli-Palestinian conflict has been going on for decades. It started in 1947, when the United Nations approved a plan to split Mandatory Palestine, inhabited by Arabs and Jews, into two separate states. The plan was accepted by Jewish leaders, but rejected by the Arab side. In 1948, after Israel was established as a state, a number of Arab countries decided to intervene and declared war on the country. In the ensuing conflict, Israel seized much of the land that belonged to the Palestinians. The conflict also resulted in hundreds of thousands of Palestinians being forced out of their homes.

In 1967, a number of Arab countries fought another war against Israel, which ended unsuccessfully for them, with Tel Aviv gaining military control over the West Bank from Jordan and the Gaza Strip from Egypt. The international community has made numerous attempts to resolve the conflict, but they have so far all been unsuccessful, as both sides have failed to reach compromises on key issues.

The Palestinians want to create an independent state on the territories of the West Bank and Gaza Strip with East Jerusalem as the capital. Essentially, the Palestinians want back lands that Israel started controlling after the 1967 Six-Day War. Israel, in turn, opposes the idea of returning lands to the Palestinians and claims Jerusalem is its historical capital, and hence that it cannot be divided.