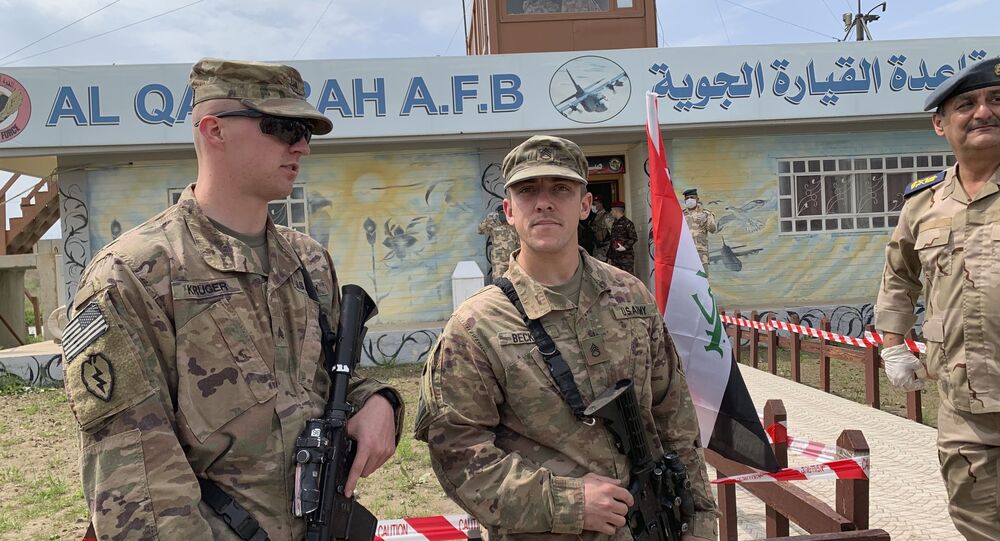 Iraqi PM Says US Combat Troops Have Got to Go

In January 2020, Iraq’s parliament issued a resolution ordering the expulsion of all US and coalition forces from their country in response to the unprovoked assassination of a senior Iranian military commander in Baghdad. Washington has pared down its deployment and handed over some bases to Iraq, but refused to depart the country completely.

Iraq continues to depend on American security and training assistance, but doesn’t want US combat troops to remain present in the country, Prime Minister Mustafa al-Kadhimi has said amid his preparations to visit Washington next week.

“We are visiting Washington to set out our relationship with America. The Iraqi army still needs their forces for training. We need their support to our air force, and we need their intelligence support in the fight against ISIS*,” al-Kadhimi said, speaking to Saudi Arabia’s al-Hadath TV on Sunday.

“The visit will be to set out this relationship, and to put an end to the presence of combat forces, because the Iraqi army can now fight for itself on behalf of Iraqis and the world against terrorist groups in Iraq. There is no need for combat troops,” the prime minister stressed.

© AP Photo / Evan Vucci
Biden Slammed by GOP for ‘Bare Minimum’ Response to Escalating Attacks on US Troops in Iraq, Syria
In a related development, the Iraqi military announced on Sunday that its forces had destroyed a Daesh (ISIS)* drone loitering over a police station in the western al-Anbar province and seized four of the group’s strongholds in Kirkuk region, capturing weapons and other equipment.

Al-Kadhimi is set to arrive in Washington on Monday 26 July for face-to-face talks with US President Joe Biden, with a White House brief on the upcoming visit saying that it would “highlight the strategic partnership between the United States and Iraq and advance bilateral cooperation” between the two nations. The Iraqi side says al-Kadhimi’s objectives during the visit will include pushing for a concrete timetable on the withdrawal of US troops from the country.

In his comments to al-Hadath, the prime minister expressed “hope” that Iraq would not allowed to become an arena for the conflict between the United States and Iran, stressed that he would not allow his country to be used to threaten its neighbours, and noted that Baghdad is partnered with Iran because “the Iranians are working seriously to help us build stability in Iraq.” Al-Kadhimi confirmed that he would visit the Islamic Republic some time after the inauguration of the country’s new president in August.

Iraq and the United States established “the mechanisms for the withdrawal of combat forces from Iraq” in April, but did not set a deadline for the troop pullout. Later that month, US Central Command chief Gen. Frank McKenzie welcomed plans by NATO to expand their presence in the country from 500 to 4,000 troops, suggesting the Western alliance was “going to stay in Iraq” to “finish the [Daesh] fight.”

The Trump administration began to draw down troop numbers in the country in March of 2020 after assassinating Iranian Quds Force commander Qasem Soleimani in Baghdad in January of that year, with troop numbers declining from 5,300 to 2,500 by the time Donald Trump left office. In addition to the troop withdrawals, the US formally handed control of major bases back to the Iraqi side. The Trump administration planned to withdraw all remaining US forces from both Iraq and Afghanistan by the spring of 2021.

The Biden administration has resisted in principle the idea of a complete pullout, citing the supposed ongoing threat of jihadist militias, four years after Washington declared victory in the war against Daesh in 2017.

Iraq’s Popular Mobilisation Forces (PMF) militias – a Baghdad-allied collection of mostly Shia militants formed in 2014 to battle the terrorists, have demanded an immediate and complete US withdrawal from Iraqi territory, accusing Washington of supporting Daesh, and warning that US forces in the country may be targeted if they refuse to leave. Abu Mahdi al-Muhandis, the deputy chairman of the PMF, was killed alongside Soleimani in the January 2020 US airstrike, enraging militia leaders and prompting Iraq’s Shia majority parliament to demand the expulsion of the Americans.

Last week, Kata’ib Hezbollah, an Iraqi militia the Pentagon has consistently blamed for rocket attacks against US forces, warned Washington that Iraq’s battle against US “occupation” would not end until all uninvited foreign forces were out of the country. Meanwhile, Asa’ib Ahl al-Haq, another Shia militia, has said that there would be no safe haven for “terrorist US forces” in their country.

© AFP 2021 / HAIDAR HAMDANI
Members of the Hezbollah Brigade in Iraq, a Shiite movement supporting the Iraqi government forces in the ongoing clashes against Islamic State