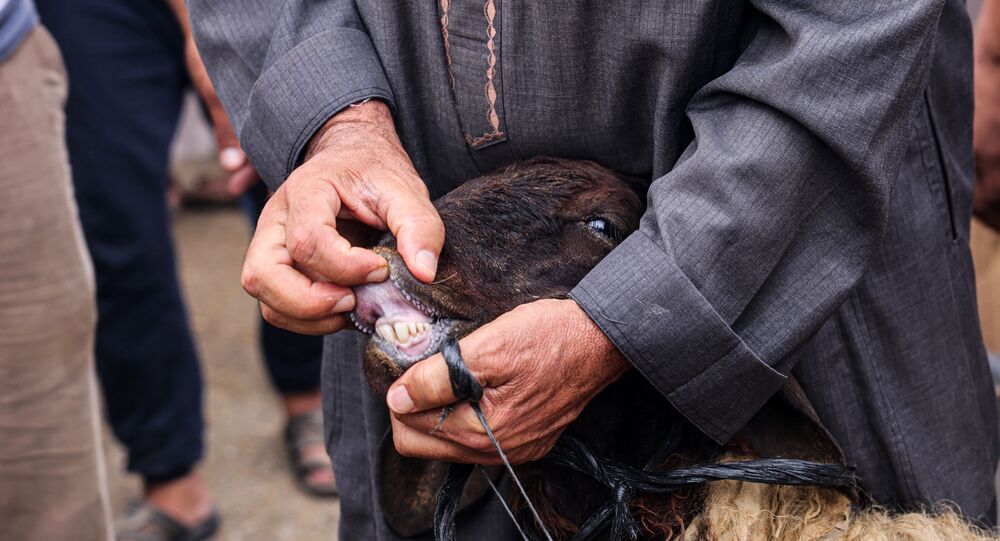 As Hunger in Gaza is Rising, a Local Embarks on an Initiative to Feed the Poor

Half of the Gaza Strip's population lives below the poverty line, which is why purchasing meat for the Eid al-Adha holiday that commences on Tuesday is beyond the means of many of the Palestinian enclave's residents.

On Tuesday, Muslims around the world will mark one of the most important religious holidays in Islam, Eid al-Adha, or the festival of the sacrifice, that honours the willingness of the Prophet Ibrahim (Abraham) to sacrifice his son as an act of obedience to God.

Meat As a Luxury

But for many Muslims in Gaza, that holiday, where worshippers are expected to slaughter an animal to commemorate the deed of Ibrahim, who ended up sacrificing a lamb instead of his son, is simply unaffordable.

Buying a sheep in Gaza would cost $400. A kilo of meat is sold for $12 in local markets, but in the Strip, where the average monthly salary is $300, eating meat is considered a luxury, not a staple.

Some have vowed to change that. Six years ago, Walid al Hattab, a 55-year-old father of six from the al-Shejaeya refugee camp in the east of Gaza city, started an initiative aimed at distributing meat to underprivileged families in the Strip.

"I came up with this idea when I saw hundreds of people who couldn't afford buying meat during the holy month of Ramadan or Muslim holidays. And I wanted to help them, especially as I see the deteriorating conditions of the Strip."

The economic situation in Gaza has never been stable but it's become significantly worse since 2007, after Hamas, an Islamic group deemed a terrorist organisationt by Israel, seized control over the Strip, ousting the officials of Fatah.

In response, Israel imposed a land and naval blockade over the Strip, pushing unemployment and poverty rates up.

Partially it was due to the drop in international funds and partially it was because of the outbreak of COVID-19 that prompted the authorities to shut down public offices and private businesses, sending thousands of Gazans home.

Another military confrontation with Israel that erupted following the barrage of rockets that were launched on the country's towns and cities in May has put another strain on the already fragile economy, and al-Hattab says he is longing to see a return to life in Gaza as it was before the takeover of Hamas and the subsequent Israeli blockade.

"Before 2007, Gazans' life had been stable. But the situation has changed because of political conditions and the continuous military tensions with Israel, which imposed a tight lockdown on two million people. So I decided to help and change their reality not only through providing the poor and the needy with meat dishes, but also by spreading the culture of collaboration and mutual assistance among Gazans."

His initiative is funded by a number of rich donors. Al-Hattab donates money too, but just like many others in Gaza his donations have been limited due to the economic hardships of the enclave.

That, however, doesn't stop him from pursuing his dream to help people.

On a regular day, he prepares dozens of hot meals. He is also distributing meat and other essential products among the needy masses.

During peak seasons like Eid al-Adha, the man cooks some 200 meals. During the month of Ramadan, when Muslims are fasting and then breaking the fast after the sun sets, he makes around 100 or 150 meals a day, and the feedback that he is getting has been phenomenal.

"Many people praise my initiative and ask me to keep it up for a long period of time. But I am not blinded by their praise. I am doing this for Allah and I only seek his approval."