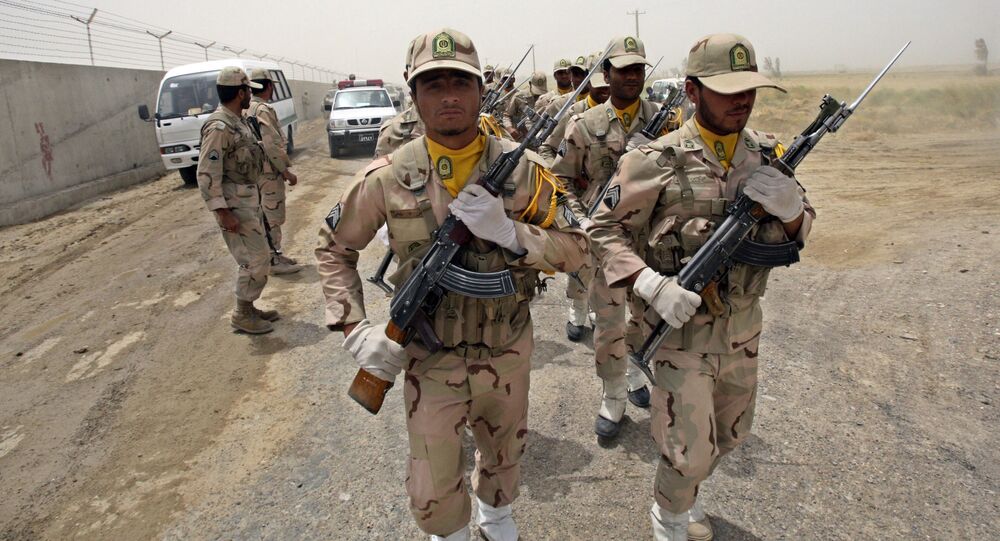 Iran has had a notoriously poor relationship with the Taliban in past decades, even threatening to launch a military invasion targeting the Sunni fundamentalist movement in the late 1990s over the killings of diplomats at an Iranian consulate in Mazar-i-Sharif in 1998. More recently, Tehran’s position has softened somewhat.

Iran’s border with Afghanistan is tranquil and will remain secure due to the "zealousness" with which the country’s border guards patrol it, Foreign Ministry Spokesman Saeed Khatibzadeh has indicated.

“The borders of the Islamic Republic of Iran are in full tranquility and security thanks to the zealous border guards of our country, and there is no insecurity on our country’s border with Afghanistan,” Khatibzadeh assured in a briefing.

At the same time, he confirmed that clashes at two crossing points on the Afghan side of the border had caused an unspecified number of Afghans to flee into Iran. Tehran “will take the necessary measures in accordance with laws and regulations and in line with border agreements with Afghanistan and within the framework of good neighbourliness,” the official stressed.

© AP Photo / Rahmat Gul
Four Afghan Police Officers Killed in Overnight Clash With Taliban Fighters, Reports Say
Khatibzadeh’s comments come in the wake of the Taliban’s seizure of the Islam Qala border crossing in the western Herat province this week. The crossing is the largest trade gateway between Iran and Afghanistan, and generated an estimated $20 million in monthly revenue for Kabul before its seizure. Afghan officials confirmed on Friday that the crossing point had fallen after a Taliban spokesman announced that the area was “under our full control.”

Iran’s military has promised to defend the frontier in combination with border patrol and Revolutionary Guard forces, with Ground Force Deputy Chief of Operations saying security forces “closely monitor the slightest movements near the borders” and will “not allow the slightest illegal motion through these borders.”

On Thursday, Iran’s Customs Administration urged businesses to halt all shipments via the Islam Qala crossing and the Mahiroud-Sheikh Abu Nasr Farahi border point in Iran’s South Khorasan province until further notice amid a deteriorating security situation in the area. The agency noted that the Milak-Zaranj crossing in Sistan-Baluchestan will remain open. The border closures have already reportedly caused dozens of trucks to pile up on the border from the Iranian side, with at least 45 of them returning as of Friday.

Taliban have seized control of two of the three customs offices along the Iran-Afghanistan border. First Islam-Qala and now Farah. pic.twitter.com/tct8nltRkU

© AP Photo / Mirwais Khan, File
Cargo Traffic From Iran Stops After Taliban Seize Crossing in Afghanistan, Reports Suggest
The loss of the Islam Qala crossing point is potentially a major economic blow to both countries, having served as a key trade link between the two nations. Iran is one of Afghanistan’s largest trade partners, with the Afghani side buying some $1.24 billion in Iranian goods in 2019 (14.5 percent of all imports) and selling $15 million in goods (1.72 percent of exports) during the same year.

Along with the border crossings with Iran, the Taliban has taken control of border areas with all of Afghanistan’s other neighbours, including Tajikistan, Turkmenistan, Pakistan, and even China, with which the country shares a frontier only 76 km long.

Afghan border guards are fleeing into Iran, according to videos coming from the border crossing that fell into Taliban's hands pic.twitter.com/4XL0V3tEwB

The militant group claimed Friday that it had taken control of some 85 percent of the country’s territory. Kabul officials dismissed the claim.

Along with Russia, Iran has taken up a key role in searching for a long-term diplomatic solution to the Afghan conflict. This past week, Tehran hosted four delegations of Afghan government officials and parliamentarians and representatives from the Taliban’s political office in Qatar. At the talks, Iranian Foreign Minister Mohammad Javad Zarif called on all sides in the conflict to “end the war in Afghanistan as soon as possible” and “provide the people of Afghanistan with an opportunity for development” after 40 years of fighting. Iran, he said, is “ready to facilitate” talks between all parties “in any way you wish.”

Iran has a long history of hostility toward the Taliban, particularly over the latter’s poor treatment of Afghanistan’s Shia Hazaras minority. In the late 1990s, after the September 1998 massacre of several thousand Afghan Hazaras civilians and 11 Iranian diplomats at the Iranian consulate in Mazar-i-Sharif, Iran amassed several hundred thousand troops on the border and threatened to invade the country to sweep the group from power. Cooler heads ultimately prevailed, but tensions remained.

In late 2001, Iran even indirectly supported a US special forces-led operation in Herat, northwest Afghanistan to drive the Taliban out of the city. Before that, Tehran provided material assistance to Ahmad Saha Massoud, the leader of the Northern Alliance rebel group which would eventually help topple the Taliban from power in Kabul.

© AP Photo / Allauddin Khan
As Taliban 'Seizes' Key Crossing With Iran, Moscow Says Group Controls 2/3 of Afghan-Tajik Border
More recently, amid Taliban efforts to rebrand themselves, the realities of geopolitics and a desire to avoid being sucked into a new war, Iran has gradually softened its position on the Taliban, while continuing to refuse any formal ties, amid a raging political debate inside the Islamic Republic.

Last month, an op-ed in Kayhan, a conservative Iranian newspaper aligned with Supreme Leader Ali Khamenei, suggested that the Taliban had not targeted Shias in their recent campaigns, and that “the Taliban today is different from the Taliban that used to behead people.”

However, a separate commentary in the Arman daily by retired diplomat Ali Khorram claimed that the Taliban was targeting Afghani Shias, and charged the group with “push[ing] back Afghan women to the stone age, and violat[ing] their rights as well as the rights of other parts of the Afghan nation.” He went on to allege that the group allows jihadists such as ISIS (Daesh)* to use Afghan territory to prepare for attacks inside Iran, and argued that late Quds Force commander Qasem Soleimani "would not have waited" to deal with the emergent threat.