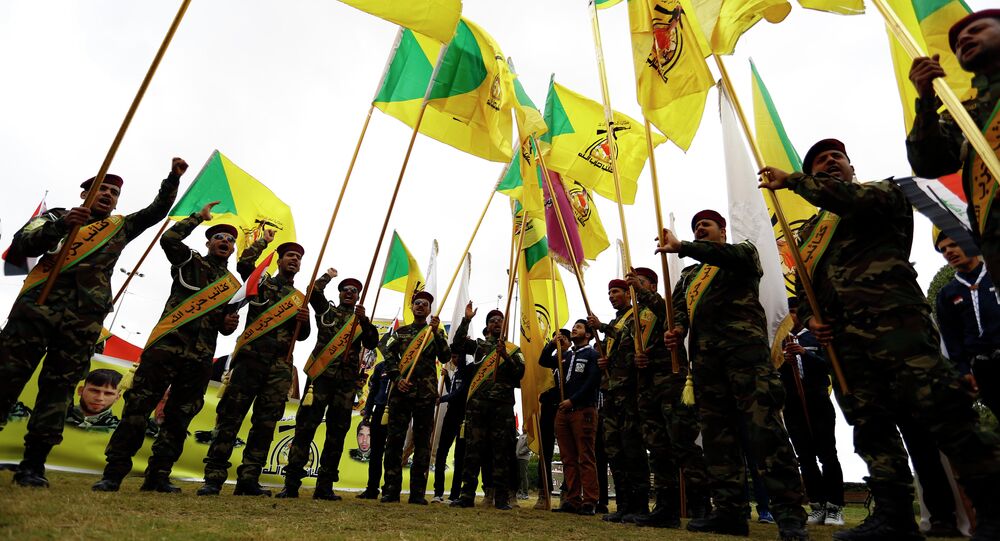 US officials have spent years blaming Kata’ib Hezbollah, an Iraqi Shia militia group allied to the Baghdad government in its battle with Daesh (ISIS)*, for a series of attacks against US forces in Iraq. The group has denied some of the allegations and accused Washington of staging false flags.

Iraq’s battle against US “occupation” will not end until all uninvited foreign forces are out of the country, Abu Ali al-Askari, a senior commander of the Kata’ib Hezbollah brigades paramilitary group, has suggested.

“Resistance, in all its forms, is an inherent right of the Iraqi people,” al-Askari wrote on his Telegram and Twitter pages.

“Whoever defends the occupation forces and the killers of the Iraqi people is a traitor criminal,” the commander added.

Al-Askari denied US allegations of Kata’ib Hezbollah involvement in attacks on US diplomatic facilities, including the Green Zone compound in Baghdad, suggesting that the policy to avoid attacks on the “embassy of evil” was the group’s “principled” position.

The killings of Soleimani and Muhandis prompted Iraq’s Parliament to push through a resolution demanding the complete ouster of US troops, and led to a major escalation of rocket attacks on US forces throughout the country. It also prompted the US to withdraw several thousand troops from Iraq amid the seething tensions.

By January 2021, Donald Trump’s Pentagon announced that it had halved the number of US troops in Iraq from about 5,000 to 2,500. The Biden administration halted the drawdown in January, stressing that there were no plans to withdraw US troops completely due to the supposed threat posed by Daesh remnants and by "Iran-backed militias." In February, NATO announced that it would be expanding its presence in the country from 500 to 4,000 troops to engage in "training."

© REUTERS / Nazanin Tabatabaee/WANA (West Asia News Agency)
Iraqi Intel Believes Daesh Carried Out Attack Used by US as Pretext to Kill Iranian General - Report
The United States has used Kata’ib Hezbollah to justify a broad range of controversial military activities in Iraq. In December 2019, the Pentagon accused the group of a deadly attack on a base in northern Iraq which killed a US mercenary and injured several troops. That attack was used to justify the January 2020 drone strike targeting Soleimani and Muhandis, and earlier attacks against militia facilities in western Iraq and eastern Syria. Later, Iraqi military and intelligence officials told US media that Daesh, not Kata’ib Hezbollah or any other pro-Baghdad militia, was likely responsible for the December 2019 attacks.

In February 2021, the Biden administration approved new airstrikes in eastern Syria, claiming that the attacks were meant to “send a message” to America’s adversaries that the president would “protect Americans” being targeted in Iraq. The US conducted a second round of “defensive strikes” on the Iraq-Syria border late last month, ostensibly over Kata’ib Hezbollah and another Iraqi militia involvement in “attacks on American interests” in Iraq. Syrian officials said the latter strikes killed a child and injured three civilians after missiles hit a residential area. Baghdad and Damascus condemned the strikes as a “flagrant violation” of their sovereignty and of international law.