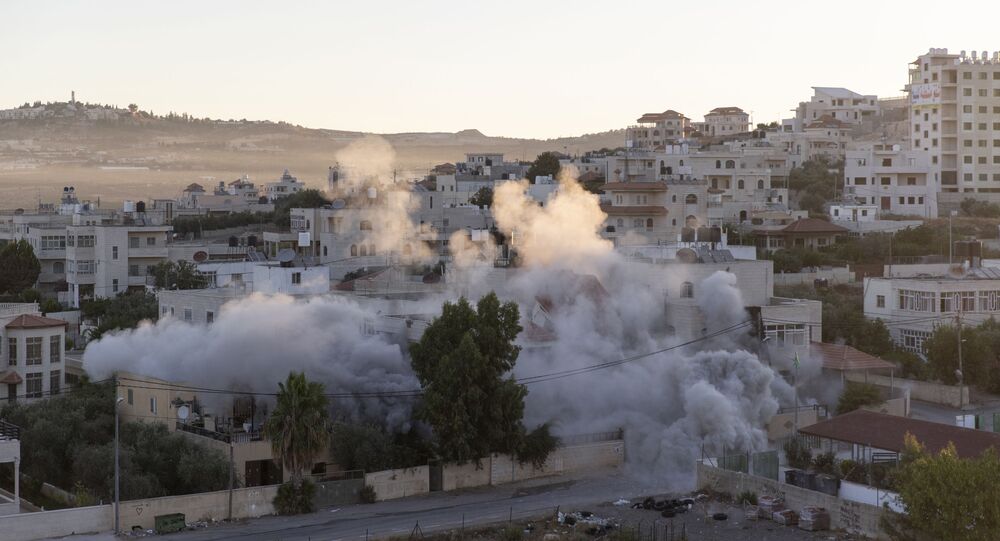 After Israeli authorities demolished the house of a Palestinian-American family in the West Bank, the US embassy in Jerusalem issued a rare rebuke of Israeli policy on Thursday, calling on “all parties to refrain from unilateral steps that exacerbate tensions and undercut efforts to advance a negotiated two-state solution.”

On Wednesday morning, Israeli troops detonated explosives around the house of the Shalabi family in the village of Turmis Ayya, about halfway between Nablus and Ramallah in the West Bank. The demolition was retaliatory, done as punishment by an Israeli military court after Muntasir Shalabi was indicted for a May attack on three Israeli students, one of whom died from his wounds.

The demolition was captured on film and circulated widely on social media.

#video The occupation destroyed the house of the Palestinian prisoner Muntaser Shalabi in Turmus Aya town, Ramallah, this morning. pic.twitter.com/ZA9Oh2pExy

Montaser Al Shalaby house after it was blown up by Israeli forces today morning in Ramallah. Palestine. pic.twitter.com/3gB7u4i74b

​Muntasir’s wife, Sanaa, and three of their children, aged 17, 12, and 9, had lived in the home. Sanaa told the Associated Press she and her husband had been estranged for several years and that he typically lived in the United States, but would periodically visit the family’s Turmis Ayya abode. However, an Israeli court ruled the house could be destroyed because Muntasir had reportedly lived there in the weeks prior to the attack and had lived there continuously from 2006 to 2012.

“They want to demoralize us, but we are steadfast. This is the situation of the entire Palestinian people,” Sanaa said, describing her husband as a “resister.”

In response, the US Embassy to Israel issued a rare condemnation of the “punitive demolition of Palestinian homes,” adding that “as we stated numerous times, the home of an entire family should not be demolished for the actions of one individual.”

Under former US President Donald Trump, Washington provided almost unprecedented support for Israeli actions, recognizing Israel’s claims to the Golan Heights, which it seized from Syria in the 1967 Six-Day War, and moving the US embassy from Tel Aviv to Jerusalem, which Israel seized the eastern half of in the same conflict and has subsequently also annexed and declared the city to be its capital.

© AP Photo / Majdi Mohammed
Sanaa Shalaby, estranged wife of Muntasser Shalaby, who Israeli security forces accuse of carrying out a May 2 shooting that killed an Israeli and wounded two others in the occupied West Bank, walks in her home in the West Bank village of Turmus Ayya, Thursday, June 3, 2021.

While his predecessor who took office in January, Joe Biden, has shown some signs he would not give Israel as free a hand as Trump was willing to, rumors that he would reverse Trump’s recognition of Israeli sovereignty over the Golan last month were quickly swatted down by State Department officials.

In 2004, the Israel Defense Forces concluded in an internal review sparked by US complaints that the practice of punitive home demolitions was not an effective deterrent. It halted the practice until 2014, when it was resumed after three Israeli teenagers were kidnapped and killed in the West Bank.

Israel has occupied the territory since 1967, building numerous settlements for Jewish colonists and military outposts to defend them from Palestinians, many of whom have been evicted from their homes in order to make way for the Jewish communities. The United Nations has decried Israel’s occupation and its colonization of the West Bank, as well as its annexation of East Jerusalem and the Golan Heights.

In a response to the embassy’s comment, an official from the office of Israeli Prime Minister Naftali Bennett told Reuters: “The prime minister appreciates and respects the US administration. At the same time, it acts solely in accordance with the security considerations of the State of Israel and the protection of the lives of Israeli citizens.”

Shalabi was allegedly responsible for a May 2 drive-by shooting at the Tapuach junction checkpoint near Nablus in which three 19-year-old students from religious college in Itamar were shot, one of whom, named Yehuda Guetta, later died.

Muntasir Shalabi has been charged with killing Yehuda Guetta, 19, at the Tapuah Junction in the West Bank in May. The shooting attack also injured two other Israeli teenagers, one of them seriously. pic.twitter.com/gDu4xPmI0A

​In response to the incident, Bennett, at the time still merely a member of the Knesset and not yet head of government, said on Twitter that Israel must respond “decisively” and with “an iron fist and the continuation of our hold on the Land of Israel.”

Bennett has long expressed support for annexation of the West Bank, although he made a promise not to pursue it during his prime ministership as a part of the delicate negotiations that created his ruling coalition’s precarious alliance. However, his government, just weeks old, has already signed off on new construction projects in Jewish settler communities.

There are about 475,000 Jewish settlers in the West Bank, who enjoy preferential rights compared to the roughly 2.8 million Palestinians there.

Battle Over Land: As Palestinians Keep Building in West Bank, Settlers Call it Illegal, Here's Why