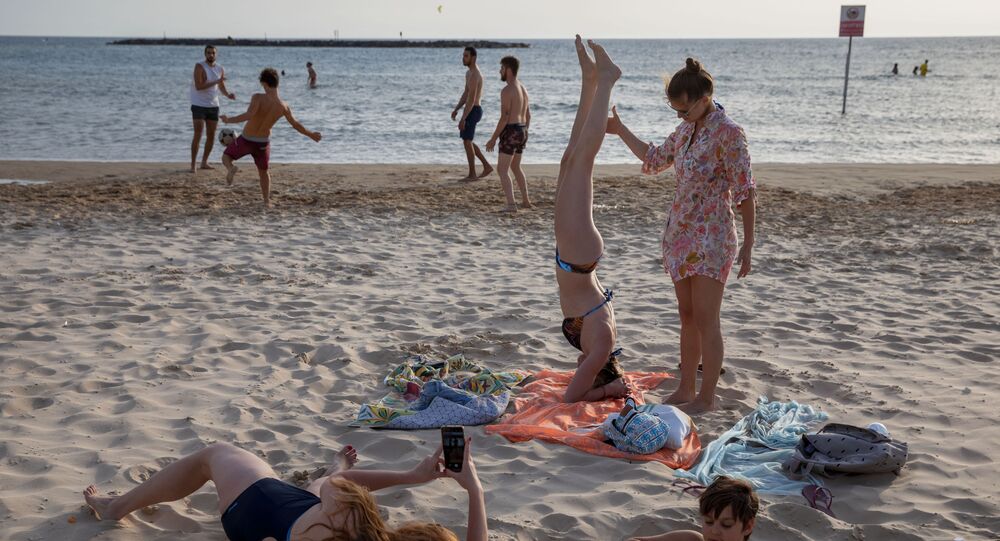 Tourism in Israel Has Been Dealt a Severe Blow by the Pandemic, But Will It See Post-COVID Recovery?

In 2019, Israel made $7 billion in revenue from incoming tourism but the outbreak of COVID-19 and the closure of international airports brought that sector to unprecedented lows. Now, as most adults have been vaccinated, the future is once again looking bright for the Jewish state.

In Israel, the numbers of new COVID-19 cases are gradually going up.

On Monday, more than 440 people were diagnosed with the virus, bringing the total number of patients to nearly 2,850. Thirty-five of those are in critical condition.

Fearing a massive spread of the Delta variant - believed to be up to 70 percent more contagious than the original virus - Israeli authorities have already introduced a number of measures to curb the spread of the pandemic.

Face masks in closed spaces were reintroduced, just weeks after they were removed, whereas foreign tourists who were supposed to enter the country for the first time since the eruption of the pandemic were urged to stay home. Israel says it will now be able to let them in starting 1 August.

But while tourists are kept at bay, Israel's economy, which relies heavily on tourism, continues to suffer.

Vladimir Shklar, the director of Israel's Ministry of Tourism in Russia and the Commonwealth of Independent States, says the pandemic has dealt a severe blow to the country's tourism sector.

"Before the coronavirus pandemic, Israel's popularity as a tourist destination was growing rapidly. In 2019, 4.55 million foreign tourists visited the country, which is 11% more than the record figures of 2018... The main sources of incoming tourist flow in 2019 were the United States, France, and Russia".

That translated into more than $7 billion in revenue. In 2020, Israel planned to break another record and receive 5 million tourists, but the outbreak of the pandemic in February cut those plans short.

Shortly thereafter the number of COVID-19 patients reached alarming levels, and the Israeli government imposed a total lockdown of the country. It shut down Ben Gurion International Airport and banned foreign nationals from entering the country.

During the crisis, the Israeli government even tried to keep the sector afloat by promoting domestic tourism.

Shklar says that millions of dollars have been put into a number of initiatives aimed at bolstering those who have been hurt by the pandemic and the economic crisis it unlocked.

"Israeli hotels received subsidies, amounting to more than $90 million, thousands of excursions were budgeted for Israeli tourists [in the absence of foreign tourists], and the government allocated approximately $3 million to pay for the services of guides, who participated in that project".

The Israeli government also poured millions of dollars into the hotel sector. It allocated ten plots for the construction of hotels, renovated rooms, and created 900 new ones.

That, however, was hardly enough, and the Israeli media interviewed a large number of tour guides, hotel and restaurant owners, who have been venting their anger at the government for failing to resolve the crisis.

Hope for a Better Future

In December 2020, a change finally occurred, with Israel kicking off its mass vaccination drive. As the amount of people inoculated rapidly increased, the government started easing restrictions, giving a ray of hope to the thousands of tourism sector employees.

"As of 1 July, about 76% of the adult population (over 16 years old) are fully vaccinated. Gradually, tourism will return to its previous level. Now it is recovering", reassured Shklar.

In May, Israel launched a pilot programme aimed at absorbing the first batches of tourists. At the time, it was decided that 20 groups of vaccinated tourists would be admitted into the country. A month later, there was a decision to expand the number of foreigners to 1,000 people, who would be granted entry. But the surge in COVID-19 cases has since put those plans on hold.

© REUTERS / RONEN ZVULUN
A man receives a vaccination against the coronavirus disease (COVID-19) in an IKEA store in Rishon Lezion, Israel February 22, 2021.

Now, as the number of infections continues to climb, Israel is limiting the entry of foreign nationals, while Israelis interested in flying abroad are being urged to declare that they will not enter one of the so-called "red" countries, where COVID-19 continues to take its toll. These include Russia, Brazil, South Africa, Mexico, and India.

Yet, Shklar remains optimistic and says the world will eventually manage to pull through and overcome the virus. And that means tourism will also get back on track.

"This is not the first time that humanity has faced pandemics. I am sure that this pandemic will be overcome like previous ones. In Israel, the pandemic sharply declined after more than 60% of the adult population of the country was vaccinated. The situation will improve when a critical mass of the world's population will be vaccinated".