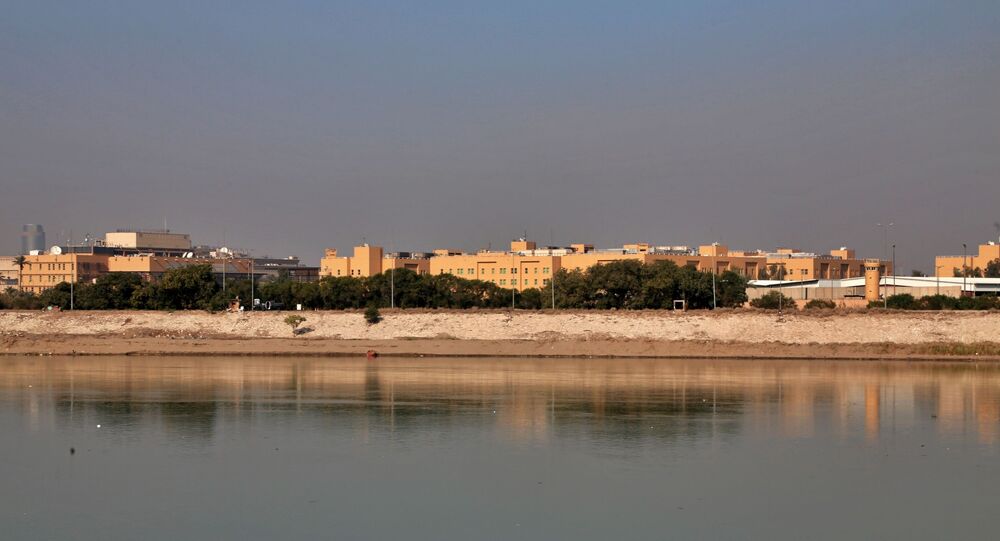 Videos: Sirens Sound at US Embassy in Baghdad Amid Reports of Downed Drone

This comes as Iraq has seen an uptick in attacks targeting US troops and personnel currently stationed in the country. In retaliation, US President Joe Biden ordered "precision strikes" on facilities of Iran-backed militants at the Iraq-Syrian border in late June.

Sirens went off at the US Embassy in the Iraqi capital of Baghdad and the air defense system was activated due to the detection of an "unknown object" in the sky above the mission, ​​Iraqi Al-Sumarya TV channel reported, citing a security source.

"Alarm sirens went off at the US embassy, ​​the C-RAM system was activated... due to the detection of an unknown object in the sky above the US embassy," the source said.

Another source told the TV channel that a drone was shot down in the Green Zone where government agencies and foreign diplomatic missions are located.

🇮🇶🇺🇸 There are reports from Iraq about an attack on the US Embassy in Baghdad. "Green Zone", where the embassy is located, an air raid was triggered, after which the C-RAM (air defense) systems activated. According to so far unconfirmed reports, attack using a kamikaze UAV.#USA pic.twitter.com/QfA3Oviwpp

​Just several hours earlier, the Ayn al Asad airbase located in western Iraq was hit by three rockets, the spokesman for the Operation Inherent Resolve (OIR) confirmed. Meanwhile, an Iraqi source told Sputnik that a total of seven missiles had been fired.

On June 28, the Pentagon said US military aircraft targeted facilities of Iranian-backed militants – Kata'ib Hezbollah and Kata'ib Sayyid al-Shuhada – in the Syrian-Iraqi border region in response to attacks against American interests in Iraq. The spokesman for the Iraqi commander-in-chief said that Baghdad strongly denounced the US airstrike against Shia militia.

In December last year, the US Embassy came under rocket fire, which reportedly resulted in minor material damage of the diplomatic mission. Then US Secretary of State Mike Pompeo blamed pro-Iranian militants for the attack. Tehran denied allegations of possible involvement in the shelling.