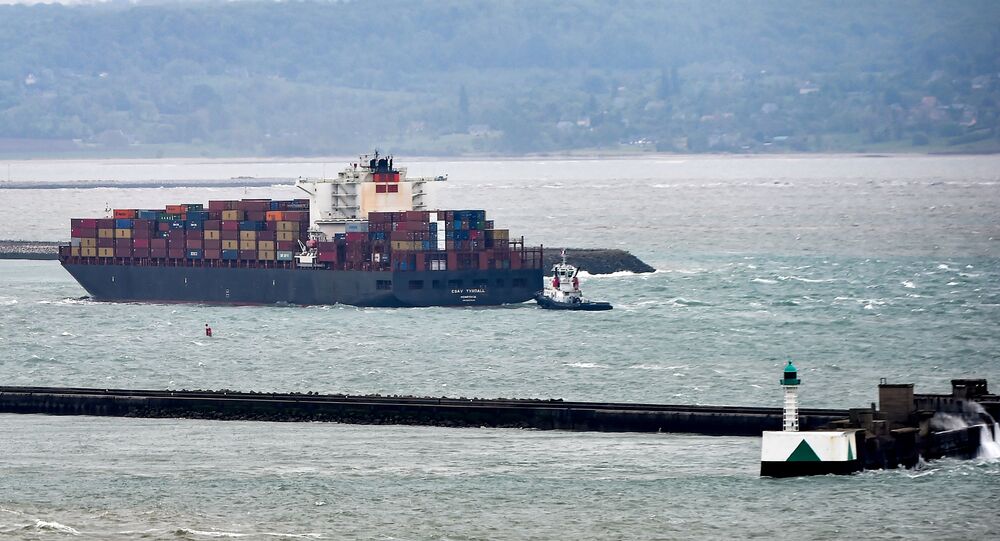 Attack on 'Israeli-Owned' Cargo Ship Reported to Be Iran's 'Miscalculation'

Reports saying that an "Israeli-owned" cargo ship had been targeted by a missile in the northern part of the Indian Ocean emerged earlier during the weekend. The vessel, according to reports, did not suffer major damage, and there were no injuries.

A Saturday attack targeting the cargo ship CSAV Tyndall, owned, until recently, by an Israeli company, could have been the result of a "miscalculation" by Iran, The New York Times reported, citing an anonymous Israeli national security official.

The official claimed that Tehran apparently possessed "faulty intelligence regarding the ownership of the vessel." According to a statement by the company Zodiac Maritime, led by the Israeli billionaire Eyal Ofer, the ship is no longer owned by the firm.

“Following reports in the media, we can confirm that the vessel CSAV Tyndall (Which was attacked in the Gulf) is not owned or operated by Zodiac Maritime, which is a UK ship management company", the company stated.

The NYT noted, referring to the database of the United Nations International Maritime Organization, that CSAV Tyndall is currently owned by another London-based firm, Polar 5 LTD.

The attack was reported earlier in the weekend, with suggestions emerging that Iran might have been behind the incident. Neither Tehran or Tel-Aviv have officially commented on the matter, but Israel's N12 TV channel, cited by Al Jazeera, reported that Israeli defense officials were investigating the possibility of the Islamic republic being involved.

The ship was attacked on Saturday north of the Indian Ocean, reportedly hit by a missile but ending up sustaining no major damage or injuries to its crew. The vessel was reported to be en route from Saudi Arabia's port of Jeddah to the UAE's Jebel Ali.

Suggestions that Tehran might be involved in the incident come as Iran and Israel, amid tense relations, target each other's vessels throughout the Middle East region. In April, Iranian general cargo ship the Saviz had been attacked in the Red Sea, with reports following shortly after about an attack against an Israeli ship targeted off the coast of the UAE.