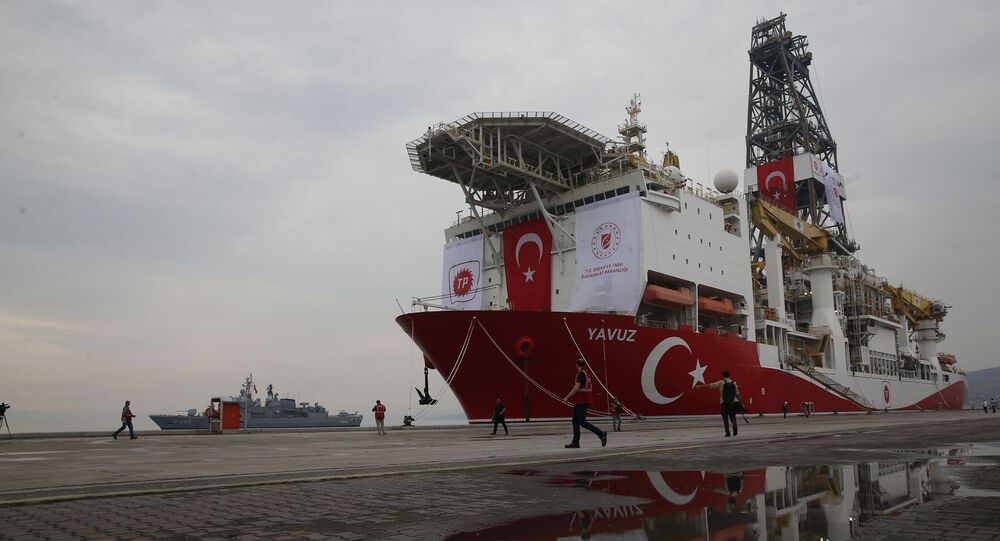 Turkey to Continue Drilling for Oil, Gas in ‘Eastern Mediterranean, Cyprus, and All Those Seas’

In March the EU offered a string of incentives to convince President Recep Tayyip Erdogan to make good on pledges to mend fraught relations amid Turkish drilling operations near the divided island of Cyprus, the search for natural gas in disputed eastern Mediterranean waters, and the migrant issue.

Turkey’s President Tayyip Erdogan has said that his country will continue exploratory drilling for oil and gas in the eastern Mediterranean, reported Reuters.

Turkey had been receiving “signals of natural gas” in the region and every effort will be made to defend its rights in the region, according to Erdogan.

“Whatever our rights are, we will take those one way or another. And we will carry out our oil exploration operations in the eastern Mediterranean, Cyprus, and all those seas,” emphasised the Turkish President during a speech in the northwestern province of Sakarya, stopping short of offering any clarifications regarding the timeline.

The fresh comments are likely to inflame tensions with the European Union and Greece over the contentious issue, just as Ankara resumed direct talks with Athens this year after a five-year hiatus.

President @RTErdogan met with President Ersin Tatar of the Turkish Republic of Northern Cyprus (TRNC) at the Presidential Complex. pic.twitter.com/WfjhfVyrzw

​Two rounds of talks have been held since January, without any significant results.

Relations between Turkey and Greece have been frayed due to competing ambitions and gas reserve claims in the region. Athens accuses Ankara of violating international rules in the Aegean Sea and the Mediterranean due to its natural gas drilling, while Turkey maintains that it has every right to drill.

Furthermore, Brussels and Ankara disagree over the divided island of Cyprus – a British colony until 1960 when it was granted independence. In 1974 a Greek nationalist clique took over and threatened the Turkish Cypriot minority, leading to Turkey sending in troops. Cyprus was split in two as a result.

© AP Photo / Lefteris Pitarakis
FILE - In this Thursday, June 20, 2019 file photo, a Turkish police officer patrols the dock, backdropped by the drilling ship 'Yavuz' scheduled to be dispatched to the Mediterranean, at the port of Dilovasi, outside Istanbul

Ankara continues to back the breakaway Turkish Cypriot administration in the north and is the only country that does not recognise the Greek Cypriot government. The UN has policed the border between the two sides since hostilities ended.

Tensions have flared between Turkey and Greece triggered by claims to overlapping areas, with the sides arguing they belong to their respective continental shelves.

Turkey had deployed the seismic research vessel and accompanying auxiliary ships on 10 August to search for potentially rich oil and gas deposits south of the Greek island of Kastellorizo. At the time, Greece's Foreign Ministry said this was a "new serious escalation" which "exposed" Turkey's "destabilising role."

Another contentious issue between Ankara and Athens is illegal migration. The EU struck a deal with Ankara in 2016 to stem the flow of migrants and refugees. Turkey agreed to take back all migrants and refugees who cross the Aegean to enter Greece illegally, including Syrians, in return for more funds.

Erdogan’s current comments come a week after the EU pledged 3.5 billion euros ($4.18 billion) for Turkey to continue hosting Syrian refugees until 2024 as part of a plan to stop migrants reaching the bloc.

However, the Turkish Foreign Ministry said on 25 June the offer “came well short of what was expected or necessary.”