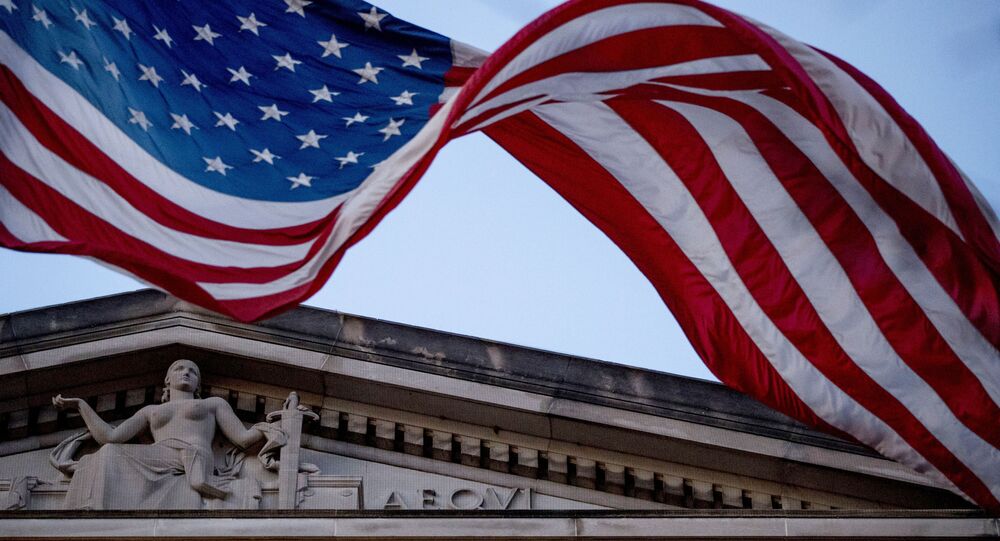 Adviser to Press TV President: US Has Turned Into Biggest Enemy of Freedom of Speech & Expression

The US DoJ's decision to take down Iran's Press TV website is yet more proof that Washington is not seeking peace in the region but instead opting to suppress of freedom of speech and expression, according to Dr Ahmad Ali-Akbari, director of the training and international relations, and a senior advisor to the president of Press TV.

Press TV, an Iranian state-owned news and documentary network, as well as al-Alam, an Arabic news channel broadcasting from the Islamic Republic, were among those blocked by the US authorities. Having migrated to Iranian domain addresses the media outlets were back online within hours.

"It is an undeniable fact that the US move to seize Press TV’s dot com domain is an act of limiting freedom of speech, which clearly demonstrates Washington’s call for freedom of speech is a tissue of lies," says Dr Ahmad Ali-Akbari, director of the training and international relations, and a senior advisor to the president of Press TV. "It shows that the US has turned into the biggest enemy of freedom of expression, and possibly the biggest violator of human rights."

Meanwhile, this is not the first time that the US has targeted Press TV, he notes, referring to Washington's repeated attacks against the medium including Big Tech's attempts to censor and silence it. Ali-Akbari recalled that previously American tech giant Google terminated the network’s YouTube channel, while Facebook temporarily took down the Press TV account with millions of subscribers.

This is d msg u get now when going to #PressTV website. Is this another example of US freedom of the press where if DC doesn’t like what u say, ur domain is seized? They try to eliminate you. But d voice of the voiceless will not be silenced! #PressTV pic.twitter.com/oEoF1MTSGM

​Washington's measures against Iranian broadcaster Press TV are not limited to cracking down on its online platforms, according to the media professional.

"The world witnessed how the US controversially arrested, imprisoned, and harassed in jail Press TV’s senior journalist and news anchor Marzieh Hashemi as a 'material witness'," Ali-Akbari says.

Hashemi, an Iranian journalist born in the US as Melanie Franklin, was arrested by the FBI on 15 January 2019 in the St. Louis, Missouri international airport. She was held in detention for ten days without being charged for any crime as a "material witness" for a federal investigation. Speaking to The Guardian about her 10-day detention, Hashemi later complained that she had been mistreated with her human rights and religious freedoms having been abused.

"The misbehaviour of the US government indicates that the US does not abide by any principles protecting rights of those criticising the system and is now turned to a dangerous country for reporters," Zarif underscored.

The US' European allies also incessantly attempt to hamper Press TV’s mission "of serving as the voice of the voiceless," continues Ali-Akbari. Therefore, European authorities took down the channel from their satellites, including SES Astra and Eutelsat satellite fleets, or banned it locally, as it was in the case with the British media regulator OFCOM, according to him.

"However, it is not surprising that Press TV’s orthodoxy by providing an alternative to the so-called truth promoted by the Western mainstream media is challenged by the US," the adviser said. "After the September 11 attacks, Washington divided the media into two camps: the media that are pro-Western policies fall into one group, and the independent media from the rest of the world — which fall into the other — are all encountered by the US. This is why we see today that independent media from around the globe are more or less encountered by the US."

US Isn't Seeking Peace With Iran

Commenting on allegations of a "disinformation campaign" brought forward by the US Department of Justice, Ali-Akbari notes that this is Washington's common practice to label any media outlet not fitting into the US mainstream narrative as a spreader of "disinformation."

"It becomes clearer when it comes to the West Asian region, where the US administration is particularly concerned with concealing the truth about the misconduct and failure of its policies encountered by anti-Imperialist resistance movements," he highlights.

Washington's attitude towards Press TV is litmus of its true intentions in the region, according to Ali-Akbari: Press TV is potentially the ideal English-language platform to build bridges between the US and Iran "as a prerequisite for peace and progress in the region." Silencing the Iranian medium is absolute proof that Washington is not seeking peace in this part of the Middle East, the media professional believes.

"Whereas the US alleges Iran to 'hide behind fake news sites,' Press TV has been regarded by many American academics, senior media personalities, and of course common people as a major news outlet that provides Westerners with a second eye," he emphasises.

​The US Justice Department's move followed the victory of Muslim jurist and principlist politician Ebrahim Raisi in Iran's presidential elections, which were criticised by the US State Department as allegedly "unfair" and "not free." Iran shredded Washington's claims and denounced them as "meddling" in the country's domestic affairs as well as a violation of international law. Raisi, a longtime ally of the country's Supreme Leader Ayatollah Ali Khamenei, is due to take the reins of the country in August.

In addition to this, the Biden administration is currently involved in the indirect talks with Tehran over the revival of the 2015 Joint Comprehensive Plan of Action (JCPOA) unilaterally torn apart by former President Donald Trump. Raisi stated that his government will continue to engage in talks regarding the restoration of the nuclear deal with the US at the same time making it clear that he would not proceed with the talks unless they ensure the interests of Iran.