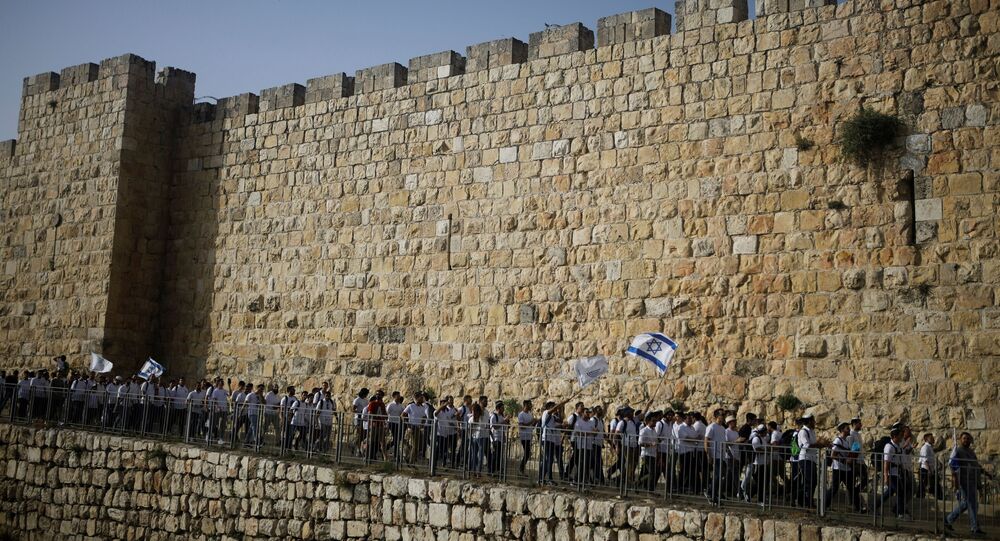 While not directly related, the last attempt to hold a Jerusalem flag march, on 10 May, was interrupted by a barrage of rockets fired at the country's capital by Gaza-based Palestinian groups.

Israeli law enforcement and the nation's military are preparing for a potential eruption of violence in response to the holding of a nationalist flag march in Jerusalem on 15 June. Border police have been reinforced in the Old City part of Jerusalem. The Israeli Defence Forces (IDF) has reportedly boosted its numbers in the parts of the West Bank that are feared to be targeted by potential terror attacks, Walla News reported, citing security sources.

Tel Aviv's military is also reportedly not ruling out a repeat of the violence caused by the last Jerusalem flag march. The event was earlier held on 10 May, but was cut short by a Hamas rocket barrage on Israeli cities that initiated a 10 days of mutual hostilities. This time the IDF will reportedly put its Iron Dome regiments on high alert, media reports suggest.

The security preparations for the march come in the wake of both Hamas and the Palestinian Islamic Jihad calling on Palestinians to hit the streets and meet up at the Al-Aqsa mosque in Jerusalem to respond to the nationalist event.

"Let next Tuesday be a day of mobilization and a bond towards al-Aqsa Mosque, and a day of rage and defiance of the occupier. Show God and your people what you have done in it, and be the best sword for Jerusalem and Al-Aqsa", Hamas said in a statement.

The Palestinian Islamic Jihad urged a "general mobilization" by Palestinians to react to what the group describes as the "provocative act and a dangerous escalation" targeting all Arabs and Muslims.

"In a democracy it is allowed and important to demonstrate within the confines of the law", Barlev said.

The minister added that the event will go as planned, while police will act in accordance with recommendations developed for the rally to be haled safely.

The Jerusalem flag march is an annual event commemorating Israel's seizure of the eastern part of the holy city of Jerusalem during the Six-Day War of 1967. During the rally, participants, often wrapped in Israeli flags, march in the streets of Jerusalem, specifically through those quarters heavily populated by Palestinians and Muslims, while heading toward the Western Wall.