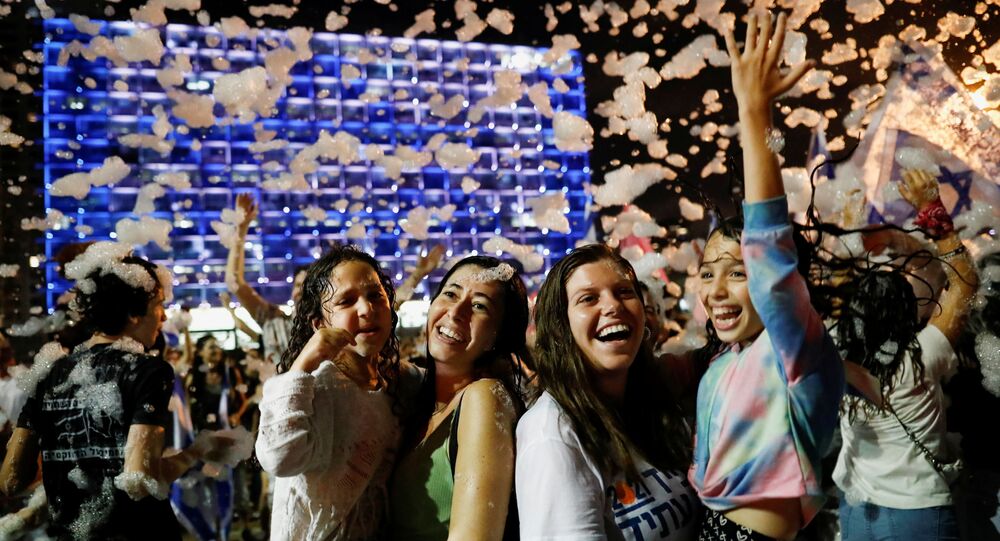 The Israeli Parliament met on Sunday to hold a confidence vote on the new coalition govermnet. Yair Lapid, the leader of Israel's largest opposition party, Yesh Atid, has succeeded in forming a government that has installed Naftali Bennett, the leader of the right-wing party Yamina, as prime minister, ending Benjamin Netanyahu's 12-year tenure.

Thousands of Israeli citizens rushed into the heart of Tel Aviv, Israel's beachfront city, to mark the end of Prime Minister Benjamin Netanyahu's 12 years in power as a new coalition government takes office.

Tel Aviv's city hall was illuminated as the flag of Israel for the celebration. In the square in front, the city's residents waved flags and raised toasts, with music blaring in the background. Soap bubbles were also seen flying in the air.

According to local media estimates, thousands of people have gathered at Rabin Square in Tel Aviv.

As journalist Noga Tarnopolsky put it, the city was celebrating the "end of Netanyahu's era", which spanned 12 years. And people were clapping, cheering, and waving flags as the Knesset swore in a coalition of ideological adversaries pledging "change".

Tel Aviv is celebrating the end of the Netanyahu era pic.twitter.com/18WuN2vAvN

​The local network Kann News provided a video from the square the moment Bennett was announced as prime minister, showing cheers from the crowd.

​According to recent videos, there were still a lot of people in the square far into the evening.

​World leaders have already congratulated Bennett and Lapid on their inauguration, among them being US President Joe Biden, German Chancellor Angela Merkel, and Austrian Chancellor Sebastian Kurz

Biden congratulated the coalition Cabinet and expressed his willingness to work with the Bennett government.

"On behalf of the American people, I congratulate Prime Minister Naftali Bennett, Alternate Prime Minister and Foreign Minister Yair Lapid, and all the members of the new Israeli Cabinet. I look forward to working with Prime Minister Bennett to strengthen all aspects of the close and enduring relationship between our two nations", Biden said.

In response, Bennet thanked Biden for the congratulations and said he is looking forward to working with him as well.

Thank you Mr. President! I look forward to working with you to strengthen the ties between our two nations 🇮🇱🇺🇸 pic.twitter.com/RNYPX4amGE

During Sunday's vote of confidence, Netanyahu criticised the political views and foreign policy approaches of the new government, in particular regarding Iran and the nuclear deal, and lauded the important accomplishments achieved during his tenure, but still shook hands with Bennett.

Netanyahu is expected to transfer power to Bennett on Monday during a meeting at the Prime Minister's Office in Jerusalem.

Later in the day, he thanked the citizens of Israel for their support and promised "we'll be back - and faster than you think".

​During his tenure as prime minister, he supervised the signing of the so-called "Deal of the Century", four normalisation agreements with Arab governments, and three confrontations with Palestinians in the Gaza Strip. Importantly, the United States relocated its embassy to Jerusalem, recognising the city as Israel's capital.

He campaigned against the Iran nuclear deal and became the first sitting Israeli president to be charged with a crime. Netanyahu was indicted by the country's attorney general on counts of corruption, bribery, fraud, and breach of trust in three different cases on 21 November 2019.

Upon leaving office, the prime minister will head the opposition. He will also have to continue to deal with the criminal cases brought against him.

According to The Times of Israel, Bennett will be the first kippa-wearing Orthodox prime minister, while it's also the first time the Arab-Israeli party Ra'am has joined a governing coalition.

© AFP 2021 / MENAHEM KAHANA
Naftali Bennett Becomes Israel's New Prime Minister, Ending Netanyahu's 12-Year Tenure
According to the coalition agreements, Bennett will be the government's head for the next two years, then he will be replaced by Yair Lapid. In Sunday's vote, 60 Knesset members voted for and 59 voted against the new government.

Last month, Israeli President Reuven Rivlin gave the leader of the opposition Yesh Atid Lapid the mandate to form a coalition government following the 24th elections to the Knesset. Netanyahu was tasked with the creation of a new government in early April, but failed to form a cabinet by 5 May, so the mandate passed to the leader of the opposition.