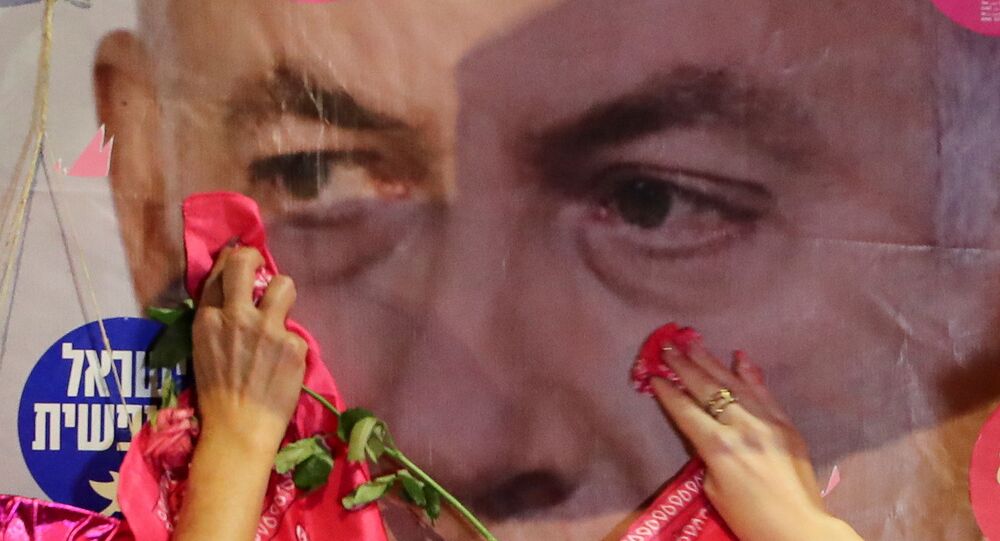 The march on Saturday was anticipated to be the last weekend protest against the current prime minister, which have been held weekly since summer 2020, before a new coalition to depose him is sworn in on Sunday.

Around 2,000 protesters demonstrated outside Netanyahu's Jerusalem residence on Saturday night on the eve of an important vote in the Israeli parliament that may end the country's longest-serving prime minister's term, the Agency France Presse reported.

Parliament will vote on whether to form a "change" coalition government to replace Netanyahu, who has been in power for the past 12 years. What some have called an unexpected coalition includes right-wing, left-wing, and centrist parties, as well as an Arab Islamic conservative party, all of which are united in their opposition to Netanyahu's rule, and the creation of the new government was reportedly finalized this Friday, as the coalition agreements were signed.

According to the report, protesters sang "Bibi Ciao" outside Netanyahu's residence in Jerusalem to the tune of the Italian partisans' Bella Ciao folklore song, although the prime minister spent the weekend at his private  house in Caesarea.

This is not the first time Israeli protesters have sung their rendition of the famous Italian resistance song, as they already celebrated Netanyahu's possible resignation last week amid news of the formation of the opposition coalition that sought to oust Netanyahu from power.

​As some of the demonstrators quoted in the report said, they were celebrating "a big night" and on Sunday there "will be even a bigger day," as some of them reportedly call it the end of "a dark era for Israel."

"This is our last Saturday here. We won. Tomorrow the Knesset will vote and this prime minister will go. It is good. He will go," one of the protesters told the outlet.

For nearly a year, starting last July, demonstrators have held regular protests against Netanyahu, demanding his resignation due to his pending trial on allegations of bribery, fraud, and breach of trust. The incumbent prime minister is the first sitting Israeli prime leader to be prosecuted while in office. In his turn, Netanyahu denies all accusations, saying that they are defamation spread by his rivals.

Protesters have also recently been calling on legislators to unite against the long-serving leader and form a new administration in recent weeks.

The anti-Netanyahu protest movement peaked in mid-summer 2020, with tens of thousands taking to the streets in Tel Aviv and Jerusalem, as well as thousands more at bridges and intersections across the country.

The new coalition government of Israel will be sworn in on Sunday at a special meeting of the Knesset, at the same time, the deputies will elect a new speaker of the Israeli parliament.

The coalition, which Yair Lapid, leader of the opposition Yesh Atid party, managed to form following the 24th Knesset elections, is called the "change bloc" and is based on a minimum parliamentary majority - 61 parliamentary votes in the 120-seat Knesset.

© AFP 2021 / DEBBIE HILL
Israel's centrist opposition leader Yair Lapid delivers a statement to the press at the Knesset (Israeli parliament) in Jerusalem on May 31, 2021. - Lapid said "many obstacles" remain before a diverse coalition to oust long-serving right-wing Prime Minister Benjamin Netanyahu can be agreed.

According to the reported terms of the signed coalition agreements, the leader of the Yamina party, Naftali Bennett, will become the first prime minister of Israel in the rotation, and in about two years he will be replaced by Lapid.

© REUTERS / Menahem Kahana
Netanyahu Offered Gantz Prime Ministership for Three Years in Attempt to Block Lapid Gov - Reports
Lapid will serve as foreign minister for the first two years before the rotation. The head of the Kahol-Lavan party, Benny Gantz, will remain the defense minister in the new government. The post of the nation's minister of finance will be taken by the head of the Yisrael Beiteinu, or Israel Our Home party, Avigdor Lieberman, whose party, based on the votes of Russian-speaking Israelis, has been in opposition since 2019.

The incumbent prime minister, Netanyahu, has pledged to go into opposition against the newly formed government.

The 24th Knesset elections were held on March 23 and marked the fourth consecutive snap elections in two years after the previous parliament voted to dissolve.

According to the results of the elections, the leader of the winning party has to assemble a coalition of a majority, for which he needs the support of at least 61 out of 120 members. If none of the parties manage to form a government within the timeframe established by law, the 24th Knesset would also be dissolved, and new elections would be scheduled for the fall of this year.