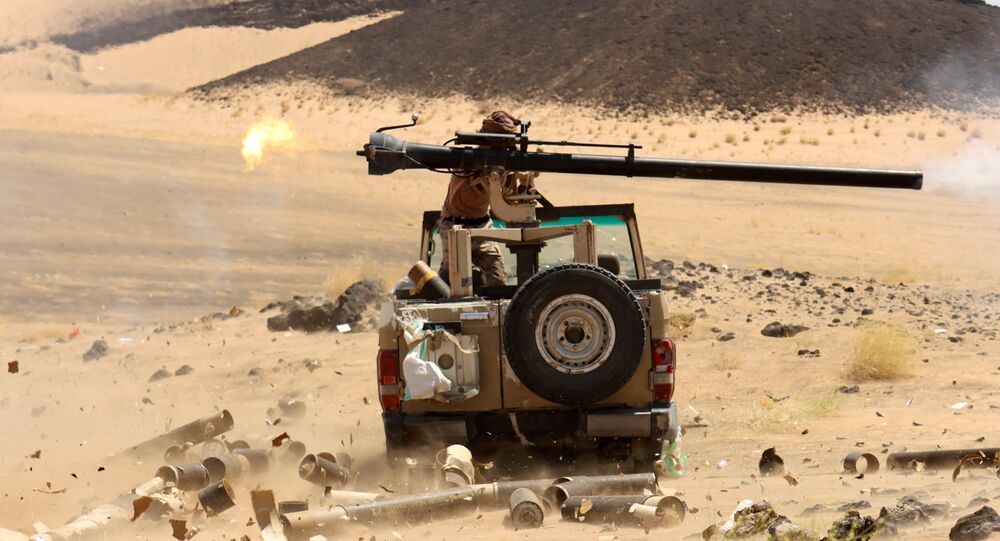 Yemen has been torn by a civil war since 2014, sparked between the government and the armed Houthi political opposition movement, whose militants control northern parts of the country and are fighting for broader autonomy and representation in Sanaa.

According to multiple media reports, at least 14 people were killed in a missile strike said to have been launched by the Houthis against a gas station in Yemen's city of Marib on Saturday.

The ballistic missile alleged to have been launched by the Houthis hit a gas station in the Rawdha neighborhood in the city of Marib on Saturday, killing multiple civilians, according to AP, citing the provincial governor’s press secretary, Ali al-Ghulisi.

Reuters reported, citing a source, that following the attack, dozens of people, many of them badly burned, had been taken to Marib General Hospital.

At the same time, a local government source told Sputnik that twelve people died and seven others were injured, noting that there are both civilians and servicemen among the fatalities.

According to media reports, no statement from the Houthi movement has been issued.

Yemeni state-run SABA news also reported that the strike was followed with a drone attack. A bomb-laden drone was claimed to have hit ambulances arriving to the area to transfer injured people to hospitals.

The Yemeni government's minister of information, culture and tourism, Moammar Al-Eryani, stated that he "strongly condemns the ballistic missile attack," according to Arab News.

​The attack came shortly after the US special envoy for Yemen, Tim Lenderking, stated that Washington would impose sanctions on two Houthi military commanders as part of an effort made jointly with the UN, to achieve a cease fire amid military actions in the gas-rich Marib governorate of Yemen.

Military actions between government forces and Houthi militants in Marib resumed in February, fueling a long civil war that broke out in Yemen in 2014. A coalition of a few Arab states, led by Saudi Arabia, entered the conflict in 2015 in a request from the nation's president-in-exile, Abd Rabbu Mansour Hadi, who fled to Riyadh in March 2015.