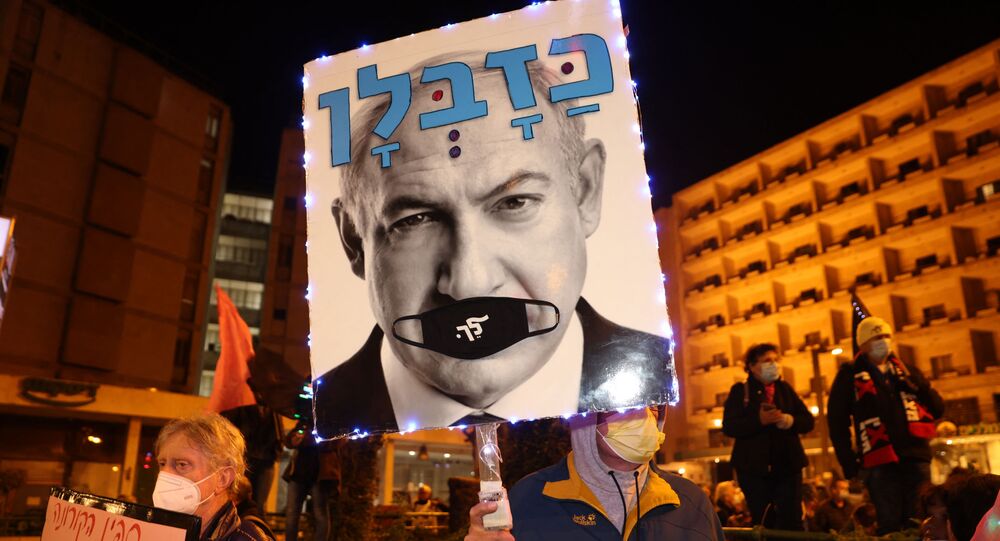 Retirement or Leader of the Opposition: What Does the Future Hold for Prime Minister Netanyahu?

If the chairman of Yesh Atid, Yair Lapid, ends up forming a coalition with the New Right head, Naftali Bennett, Netanyahu will need to decide what to do next. And his former media adviser says he will probably opt to sit on the benches of the opposition and wait for better days, when his political rivals are weakened.

In Israel, efforts to forge a coalition that will force Prime Minister Benjamin Netanyahu to leave office are still ongoing.

Now, the ball is in the court of Naftali Bennett, the man who is set to replace the nation's longest-serving PM and who is supposed to convince all members of his party that joining a government relying on an Arab political party's support is the right way forward.

Although nothing is set in stone yet, Israeli experts believe the chances are high that a Bennett-Lapid government will soon be sworn in and Israeli media outlets have already hailed their alliance as historic, primarily because it would end the "era of Netanyahu", who has been in office for 12 consecutive years.

But for Aviv Bushinsky, a former media adviser to Netanyahu, the race for the PM's seat is "not over till it's over" and he claims Israel's PM can still try to pull some tricks from his hat that could hamper the formation of the new government.

The Israeli prime minister assumes the public pressure currently being exerted on a number of hawkish politicians, who are supposed to become part of that coalition, will work, meaning the Bennett-Lapid government will be averted and that Netanyahu will remain in his post.

© AFP 2021 / RONEN ZVULUN
Israel's Yamina party leader, Naftali Bennett (L), smiles as he speaks to Yesh Atid party leader, Yair Lapid, during a special session of the Knesset, Israel's parliament, to elect a new president, in Jerusalem on June 2, 2021. - Israeli politicians battling to unseat veteran right-wing Prime Minister Benjamin Netanyahu were locked in last-ditch talks on today to hammer out their "change" coalition composed of bitter ideological rivals. Netanyahu's opponents have until the end of the day -- 11:59 pm (2059 GMT) -- to cobble together an administration that would end 12 straight years of rule by the hawkish heavyweight, Israel's longest-ruling premier.

Yet, even if he doesn't succeed in his endeavour and a government is formed, Bushinsky is certain Netanyahu will not remain idle.

"He will be able to resign, travel the world and give lectures that will earn him lots of money. But he can also stay on and become the new head of Israel's opposition".

Netanyahu is not new to representing the opposition. In the 1990s, he opposed the policies of then-Prime Minister Yitzhak Rabin, leading a battle against the historic Oslo Accords of 1993. Now, he might opt to do so again, and some members of his party Likud have already vowed to "be feisty" in the opposition and make the lives of the coalition bloc "bitter".

In the Ranks of the Opposition

For Netanyahu, going into the opposition makes perfect sense, believes Bushinsky. First of all, such a position will still give him the power and clout needed as he goes through his legal battles over a number of graft probes that include buying positive coverage and receiving illegal gifts from a rich donor. And, secondly, it will enable him to remain on the political scene, influence important processes, and wait for better days.

In Israel's turbulent political landscape, it's difficult to project when those "better days" will happen but the nation's political experts are already predicting that the Bennett-Lapid coalition will crumble and collapse within months.

© REUTERS / RONEN ZVULUN
A protester wearing a mask depicting Israeli Prime Minister Benjamin Netanyahu and a sign with the word "Liar" in Hebrew, gestures during a demonstration against Netanyahu before his corruption trial resumes, near Jerusalem's District Court April 5, 2021.

The reason for this is the bloc's opposing ideologies and its members' inability to agree on a number of burning issues, like the separation of religion and state, attitude towards the LGBTQ community, and stance on the Palestinians.

"Netanyahu knows that this government is fragile and that it will not last long. If it collapses, many of those politicians will be dead politically, so Bibi will turn from being a loser into a winner".

Yet, getting rid of political rivals will not guarantee his return to the nation's top post. For that to happen, he will first need to make certain he wins the primaries in Likud, where he is likely to be challenged by a couple of contenders, like Yisrael Katz or Nir Barkat. And he will also need to make sure that the Israeli public throws its support behind him.

The Israeli prime minister has a solid base of supporters that in the last round of elections translated into 30 out of 120 seats in the Knesset. Although that number has dwindled over time, there is a chance that Netanyahu's popularity will spike again, when he spends time on the benches of the opposition.

© AFP 2021 / EMMANUEL DUNAND
In this file photo taken on March 24, 2021, Israeli Prime Minister Benjamin Netanyahu, leader of the Likud party, addresses supporters at the party campaign headquarters in Jerusalem after the end of voting in the fourth national election in two years.

It's happened to him in the past. In 1999, when he left office, many in Israel celebrated. Many blamed him for the failure of the Oslo Accords and for the assassination of Rabin. But when terror hit Israeli streets again, the public's longing for a strong and fearless leader re-emerged and Netanyahu came back with a greater force ten years later.

This time around, history may repeat itself. The upcoming months might prove difficult for Bennett, who might take Netanyahu's seat as early as next week. He will need to address Israel's high unemployment rates, the growing chasms between the rich and the poor, and the constant security concerns emanating from the Gaza Strip, Lebanon, and Iran.

If Bennett succeeds in improving the lives of Israelis, Netanyahu might be forgotten but Bushinsky says there is also a chance that might not be the case, especially as there is a "notion that Netanyahu is the only person, who can lead such a complex country as Israel".